Cooking With Us - e37 - Jim's Chicken and Pork Adobo

Hello, kumusta?
(how are you?)


Today on the blog - Jimbo finally got to make his Chicken and Pork Adobo!
He learned this recipe from his ex-girlfriend in the Philippines, and has been bragging about it
for over a year and a half!

It is pretty simple to prepare (if you don't mind chopping garlic)! And super tasty!


Isn't that image just the cutest?
I definitely wanted to learn this recipe I'd heard so much about!

After the jump is a photo-recipe, a brief history lesson, and of course, the recipe and transcript! 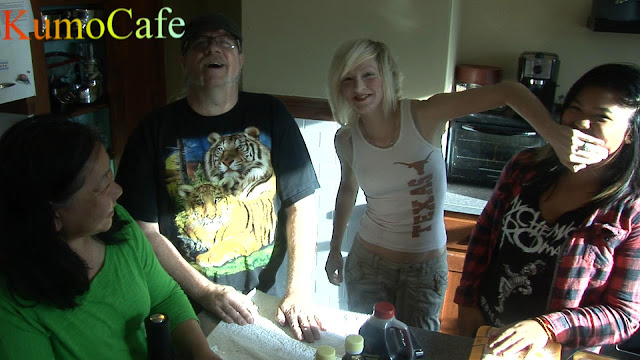 First of all, we have to welcome our friends back to KumoCafe!
Rosie said she was gonna do the intro, then she got nervous and was being bratty ;) 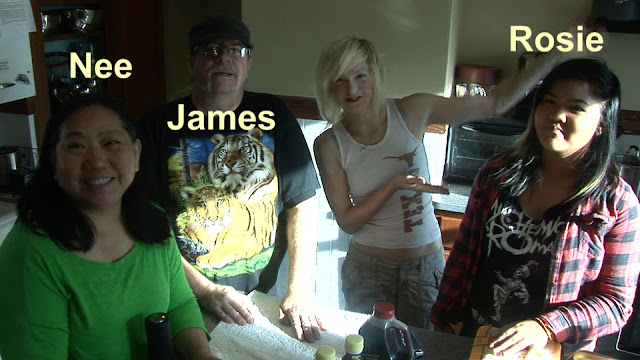 Of course you remember our friends, but it has been a while!
295 days to be exact!
Youch!  That's way too long! 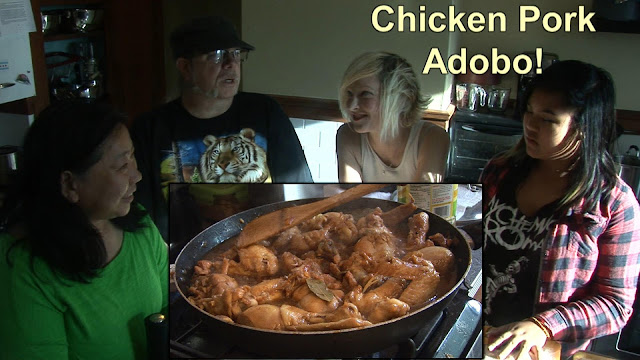 And while Nee is normally the star of the cooking show,
this time Jimbo got to truly shine, making his Chicken Pork Adobo! 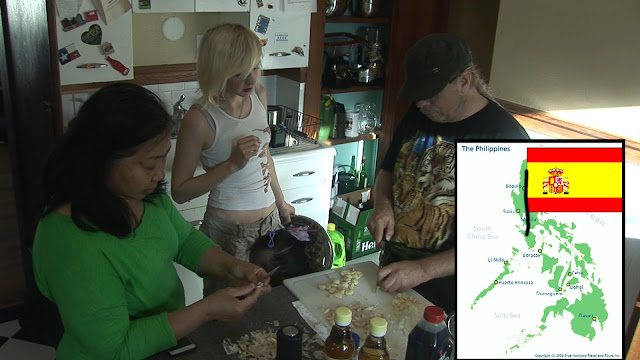 Having used adobo spices before, I always thought it was Spanish.

Well, sort of!
You see, Spain colonized The Philippines around the 16th century, and while Filipino adobo is rather different from Spanish adobo, the Spaniards decided to name this cooking method (which basically utilizes lots of vinegar) 'adobo' after their own, very disimilar, sauce.
Ah, you silly conquistadors! 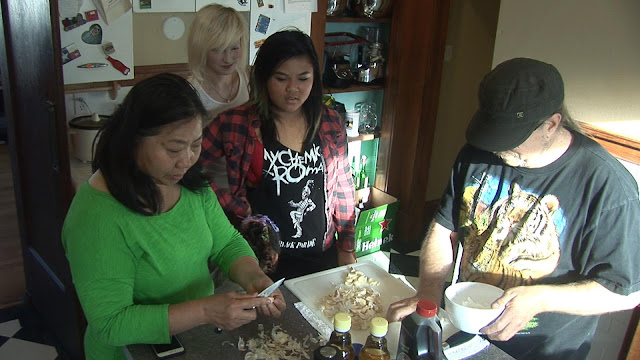 You're going to need to chop up 5-6 whole heads of garlic!
That's gonna take some time, but it is definitely worth it.
(Especially if your friends are doing it ;) 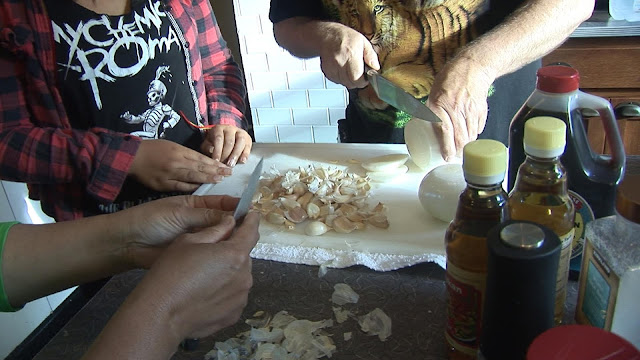 You also need to chop up two large white onions. 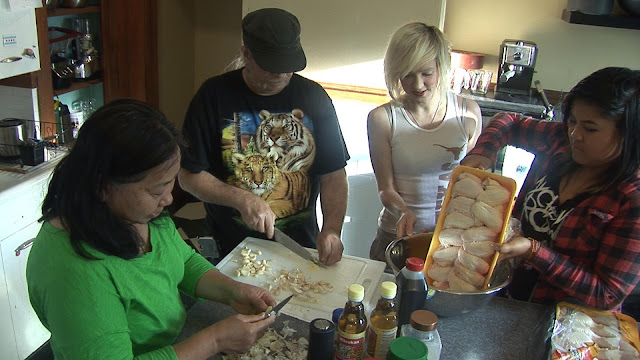 For this, we used a HUGE amount of chicken -
both wings and legs! 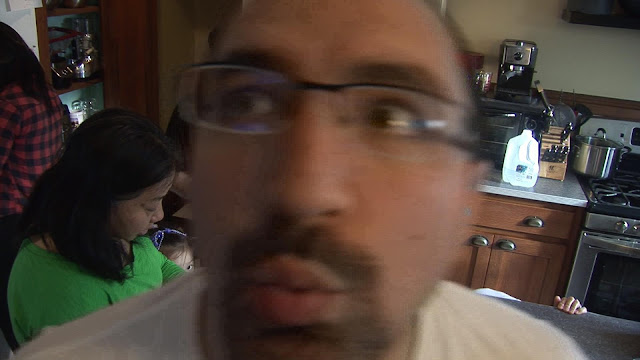 The turkey (aka my silly husband) is always fun to have around, too! 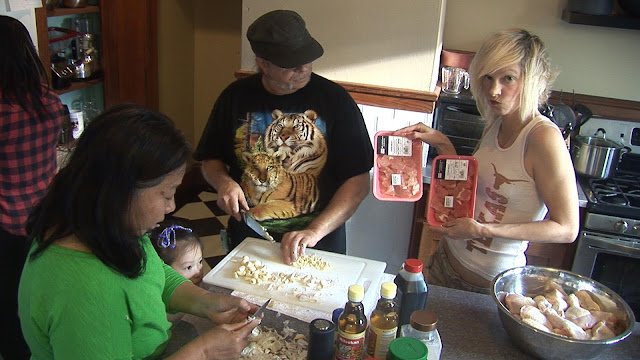 We also had pork stew meat to put in the dish as well! 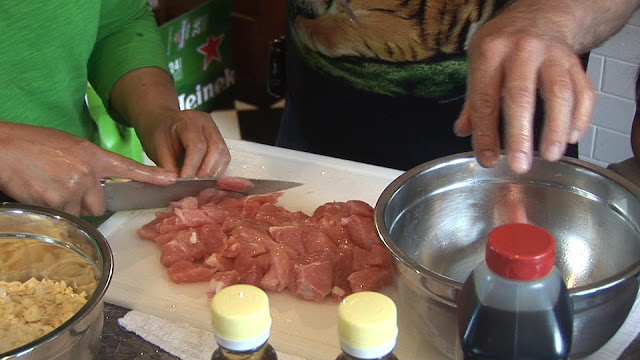 This got sliced into even smaller chunks because, as Jim pointed out,
while the chicken will break down as it cooks - the pork really wont.
Smart man, that Jimbo! 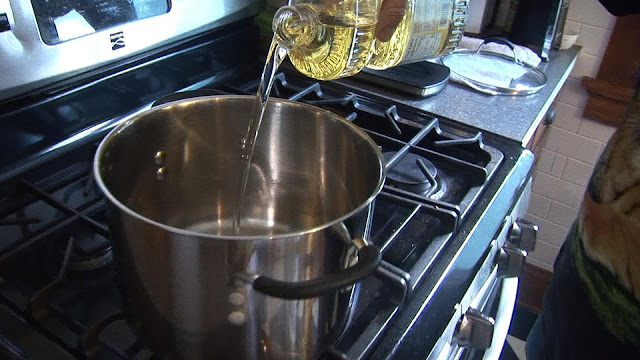 They added a lot (and I mean a lot) of Smart Balance vegetable oil in a pot
to start cooking the garlic and onions. 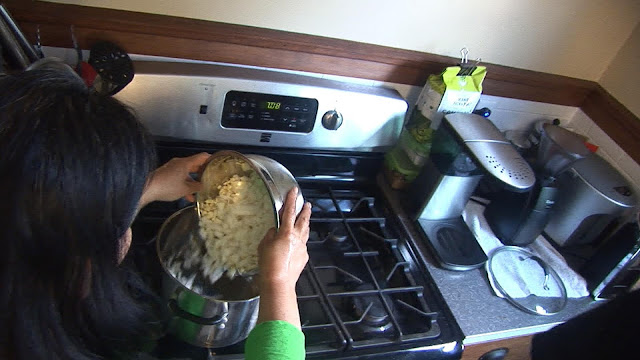 Adding in the garlic and onions!
What can I say?  I love action shots! 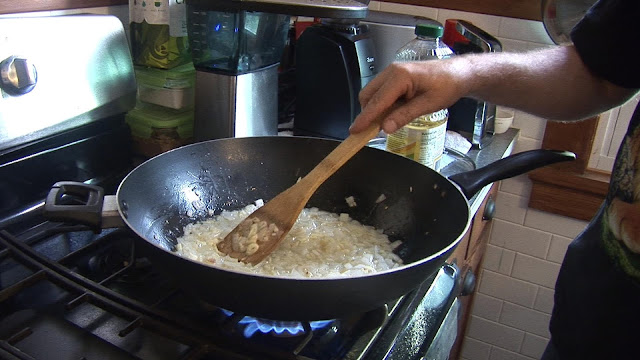 We quickly realized we needed to transfer to a wok to fit everything.
And later we realized, yet again, that we need a bigger wok! 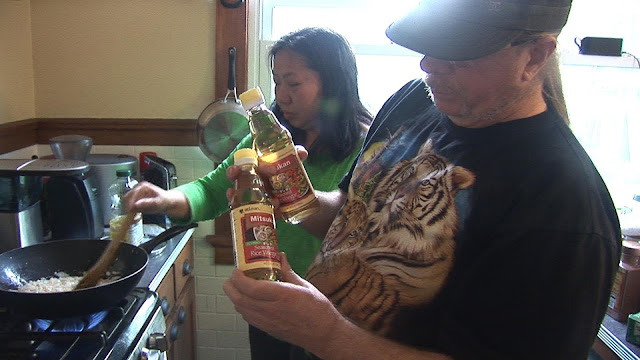 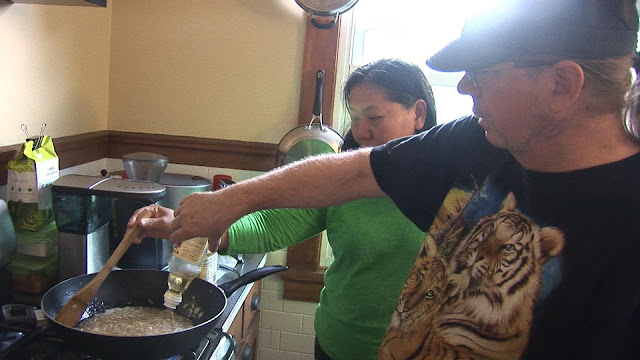 On this batch he only used one bottle, but he did use an entire bottle for this meal!
Wowzers!
Well, like I mentioned earlier, vinegar is a key ingredient in Filipino adobo! 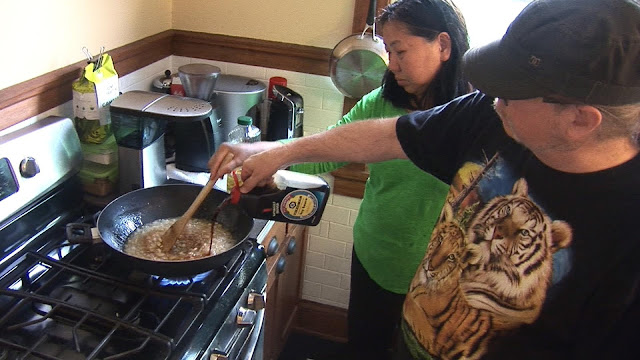 He also added half this huge thing of soy sauce!
It all turned out delicious, but if I were to make this myself
(and I'm pretty sure I will)
I would cut back on the sodium levels. 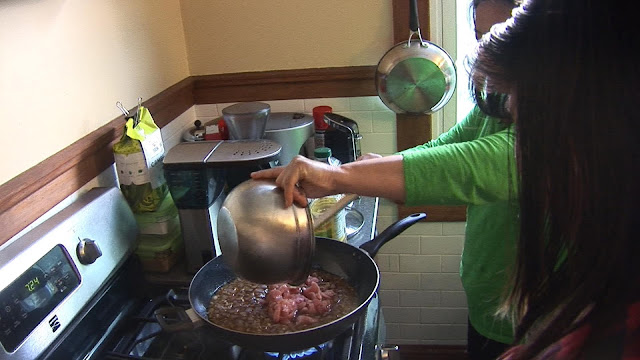 After adding the soy sauce, it was time to add the pork! 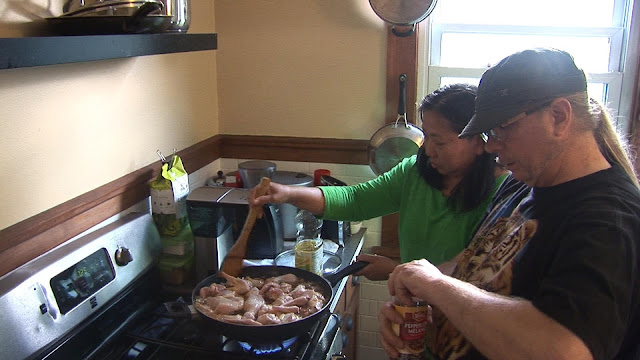 Add the chicken!
See? We do need a bigger wok! 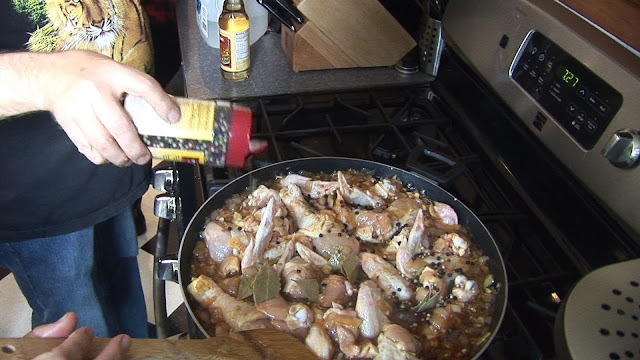 Next up: add in a ton of whole peppercorns.
Jim put int multicolored peppercorns, which was really nifty!

Also: Add a decent amount of bay leaves for flavor.
(But I wouldn't suggest eating them!) 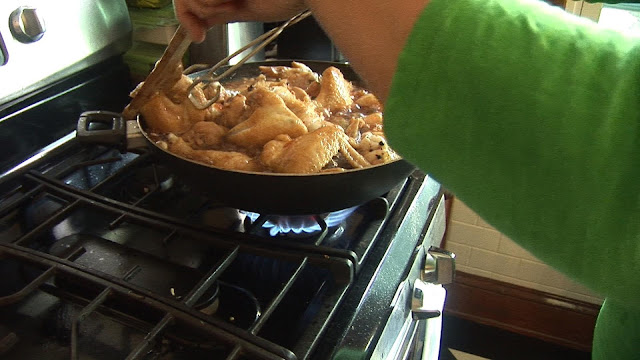 This will cook in it's own juices, and can boil for a long time.
(Look how it's boiling!)
Definitely do not add water!
Here, Nee deftly turns the chicken! 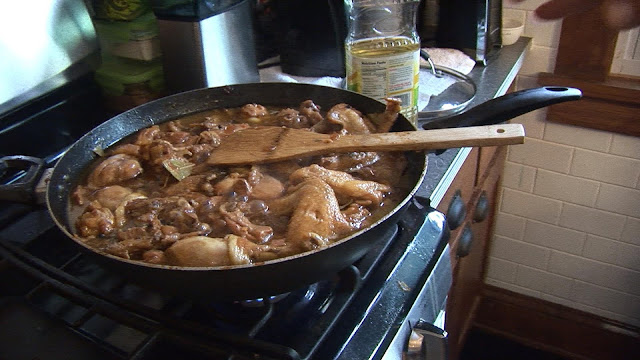 It's cooked for about an hour.
When the leg meat starts to separate from the bone, you know it's done! 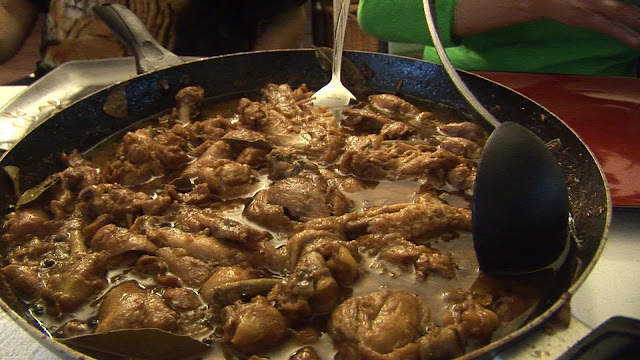 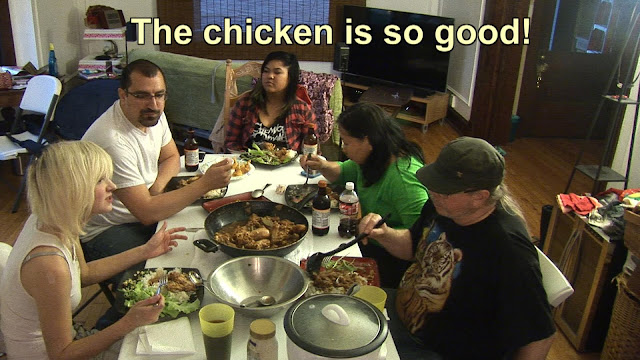 ^ And it was so good!
As Jim said, it soaks up the juices.
I will definitely have to make chicken adobo myself soon! 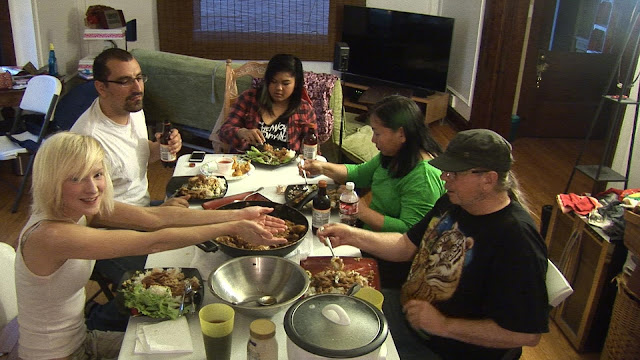 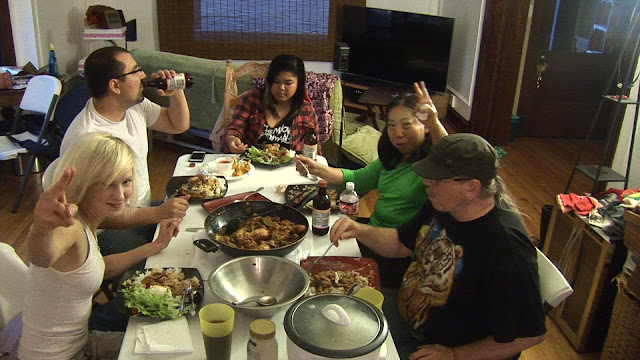 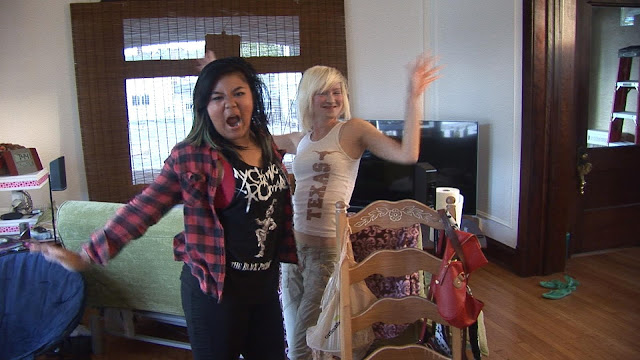 But Rose and I have to leave you with these messages:
1. Never forget to dance! (and sing... or lip-sink like a diva!) 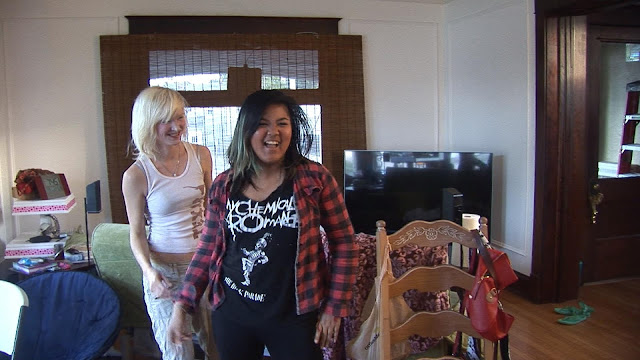 2. And never forget to laugh, smile, and have fun!

Hope you guys liked this one!
It's pretty quick (the video) but I think, all in all, you'll find a lot in this recipe to like.

Use it as it is, or as a jumping off point.
Either way, you'll have a delicious dinner!

- chop up 5 - 6 heads of garlic
- chop up 2 whole white onions
- add plenty of oil to a wok, and fry these till the garlic starts to brown
- once brown, pour in a lot of rice vinegar or seasoned rice vinegar. This is an essential part of adobo.
- pour in a lot of soy sauce as well.
(I personally would add less than Jim did of the previous sauces, because it was a bit too salty for me when I tried to eat it the next day, but to each his own!)

Once this is all added in, you can add in your meat:
- add in two lbs of sliced pork stew meat (if desired)
- add in white and dark meat chicken-on-the bone
(the dark meat on the legs will let you know it's done because it will start to pull apart)
- put in lots of whole peppercorns (black or multicolored!)
- add bay leaves for flavoring (but remove them before serving)
- Cook this over medium to high heat for its entirety
(will take approximately an hour or so)

Hi!
Thanks for coming back to KumoCafe!

I know that you remember our friends: Nee, James, and Rosie!

And today, what are we doing?

I was wondering about that...
'Cause adobo is like a - Spanish ?

Yeah cause Spain colonized The Philippines too so.
Oh so that makes sense.

So how much um... garlic are we using?

And how much onion?

We're gonna rinse this off?
Yeah

Ok, that's a lot of chicken.

Chop up the pork?

The onion and garlic?
Yes
Yeah.

Isn't that a lot already?

Soy sauce!
I'm gonna pour half of this in.

We can put meat in now.
Oooh

I wanna pour it.

That's a lot of chicken!

And now we put the peppercorns in there.

The seasoning in this dish is the garlic, the onion, the soy sauce, the vinegar, the peppercorns, and the bay leaf.

I wouldn't really recommend eating the bay leaves, it's just there for seasoning.

The wings are white meat, and the legs are dark meat, so it's a combination.

The wings will come apart before the legs. But when those things start coming apart we know that it's done.

Almost!
It's getting there... Yeah we're not too far away.

Ok, here we are at dinner!
Yeah.

He finally made his dinner!
Yeah

It's amazing!
Yes.
Yeah it is.

The chicken is so good.

It soaks up the juices.
It, it really does!  Wow!

Make it, it's amazing.
Make it!

Thank you for joining us on this episode of KumoCafe's Cooking With Us.

Where Jim finally got to make his Filipino Adobo Chicken.. and Pork... And it was fantastic.