I know it's been a while since we've posted one of these!  Sorry about that. We meant to do some in Europe and never got around to it. (Dining out was too much fun^^)

At any rate, we've eaten cabbage & potatoes with sausage twice since we've been back, and Tuesday Theron made cornbread from my mom's recipe/non-recipe ;)

Here is the video - in 4k taken with my Samsung Galaxy S6 - so definitely watch it full screen and Hi-Res :D


I am not going to do a photo post with this one like I traditionally do, because I edited it in Premiere and don't feel like dealing with it ;D

Here is a photo of everything all together (cornbread slices on the left): 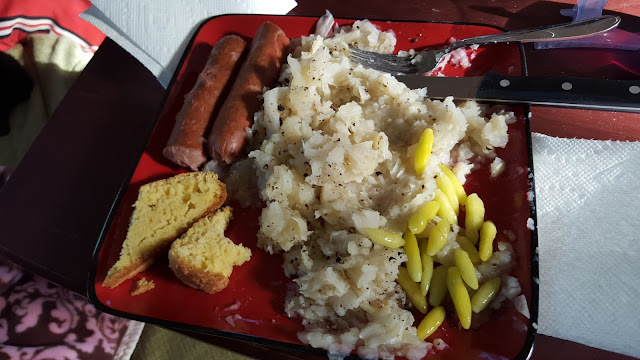 The recipe itself is pretty simple:


Mix together:
Just over 1 cup of cornmeal
Just over 1/2 cup all purpose flour
a pinch or two of salt
1 TBSP baking powder

Then add:
1 egg
And enough in milk to get a fairly thick but somewhat runny consistency.

heat oil in a cast iron skillet (enough to cover the bottom and a little more)
Preheat oven to 400 on convection setting.

Pour your cornbread mixture into the hot skillet, spooning oil on top.
Quickly put this into your oven, and let it cook for about 45 minutes.

When done, remove from oven and place on a cutting board.
Enjoy!

Transcript:
Greetings, and welcome to cooking with me!
huh!

Today I'm gonna make some cornbread, as it's the perfect accessory to go with cabbage and and sausage.

The background noise is 'cause we're, um, we have cabbage and potatoes cooking in our pressure cooker and the steam's comin' out and making that steam noise.

So, this is not my recipe, this is Mamma Jupe's recipe...

Cornmeal, over one cup.
All purpose flour, little bit over half a cup.

Teaspoon or Tablespoon or whatever of baking powder..

Oh well which one is it you - just ?
doesn't matter

a pinch of salt

A little bit of milk, just to make the right consistency...

You're gonna need some vegetable oil, a cast iron skillet...

Preheating to 400..
Ok..
I used the Convection setting 'cause it makes the outside a little bit crispier.

Gonna, put some vegetable oil in the skillet...
Just enough to cover the surface.

We'll put this on the burner and get it nice and hot.

Gonna do my cornbread first...
Basically however much cornmeal you use - use about half as much all-purpose flour after.

I'mma do, a pinch of salt...
Maybe a little more; two pinches maybe?

Today, "Cooking With Us" is shot to you in 4k with advertising, from Samsung.

How do you feel about this Brigly?
It's the first time you're on the shoulder for a while, huh?
woof!

Four or five minutes and then takes about... 30 to 40 minutes to cook then.

And then what I do is just start adding milk until you get the right consistency.

How would you describe that?

I don't know how to describe your cornbread, I don't pay enough attention. I just like to eat it .

So this is the consistency - I don't know what you call that.

That should be really hot and then you kinda like, make the surface really crispy by putting it into the oil quickly.

You kinda spoon oil on top - it's hot.

Preheated to 400, stick it in there.. and check back 45 minutes later.

Alrighty then, see you in 45 minutes..

something in my eye.

You're gonna wanna let it cool...
but we always eat it right away anyway.

Alright... Cooking with Me, and eating with Valerie.

Doesn't taste as salty as usual.
Just a pinch.

Yeah, tell me what you think.

Cooking with us, eating with Valerie! - I could live with that.

So is this video!!!!
Woooooooh

He likes it.
Keep it warm.

Thank you for joining us.
For another episode of Cooking with me, and Eating with Valerie.