Sorry it's been two months! We've been traveling a ton and life has just been hectic and odd... but I'm back!
Now on with the show!

I shan't lie, I was hoping this would turn out spicier and somehow more Tex-Mex-y... but it turned out delicious and super-healthy, so who can complain about that?

Something that is good about that eventuality is - anyone who loves delicious food but not very spicy food can still use all the ingredients in this meal and still eat it and enjoy it.  I mean really, it had no spice. But - it was fantastic!

Why am I quoting 'stew'?  Well, I wasn't planning on making a stew... but I find our culinary vernacular lacking in other phrases for such concoctions... little help? ;)

Like my mom, and I think many cooks out there, I am weird about recipes... Rarely (lest I'm trying for something specific or to recount for you guys) do I ever know exactly how much of something has gone into... well... a dish.

This is no exception, but I will try my best to tell you what all I used. 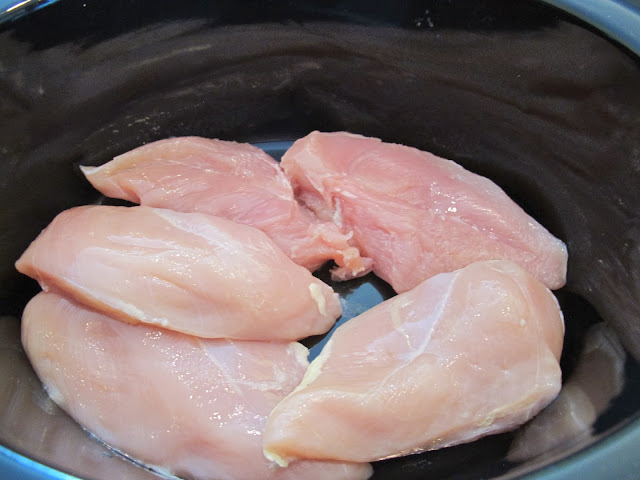 All the stuff I could find about slow cooking chicken to use as pulled-chicken, (remember, I'm still very new at this whole slow cooking thing!) - called for 6 lbs of chicken to cook in a few ingredients (for use later) for 8 hours!

Well, I had 5 lbs of chicken, and decided to use about half that - thinking my cooking time would be cut at least in 2/3rds, and I would have more chicken to cook to save or do other stuff with later...

Anyhoodle, it still takes a long time to cook ~3.5 lbs of chicken on low. 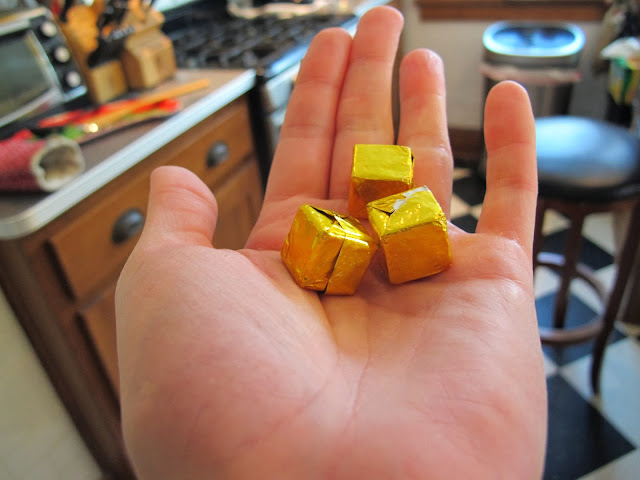 Yes, I did start with 3 cubes of chicken bouillon...
and I know it's not super healthy, but after having tried organic this and organic liquid that... screw it.
This stuff is mother's milk when it comes to cooking white meats and adding a nice flavor!
(And an upside - you never have to add more salt!) 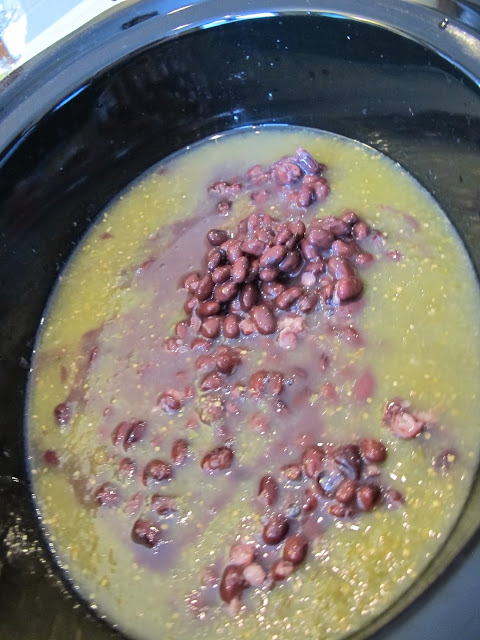 After the chicken breasts, I added four tiny cans of Herdez salsa verde
and two decent-sized cans of organic black beans... (see, I try when I can.)
One thing to note about Herdez - it's really good - but decidedly far from hot, spice-wise. 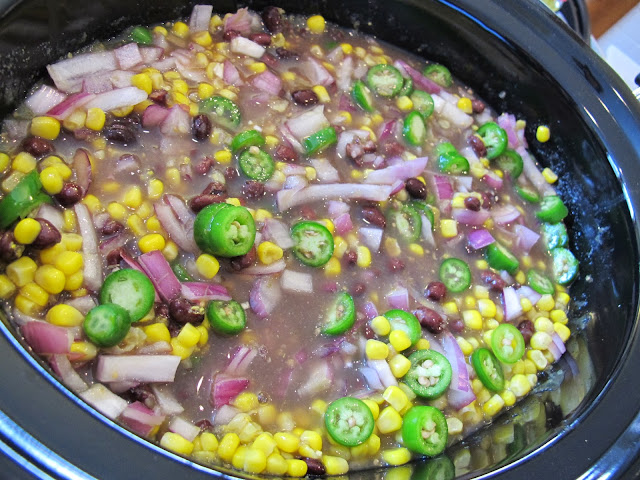 Thus I added a few freshly sliced rounds of serranos (which also were oddly not that hot - particularly losing heat after cooking) and two medium-sized cans of no-sugar-added corn.
I also used about 1/3 of a red onion, and let it cook away.
(I also added a dash of garlic powder.) 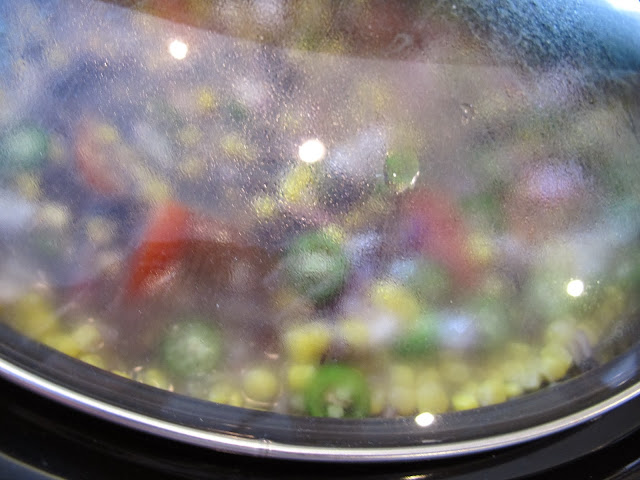 I added 2 small tomatoes cut in huge chunks, which you can barely see through the evaporated water collecting on the lid... 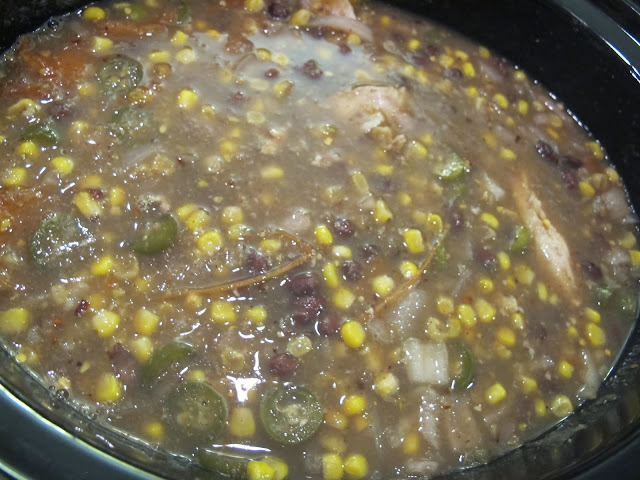 After cooking on low for about five hours, and on high for over another hour, and adding a touch of flour to condense and thicken, this is what I ended up with. 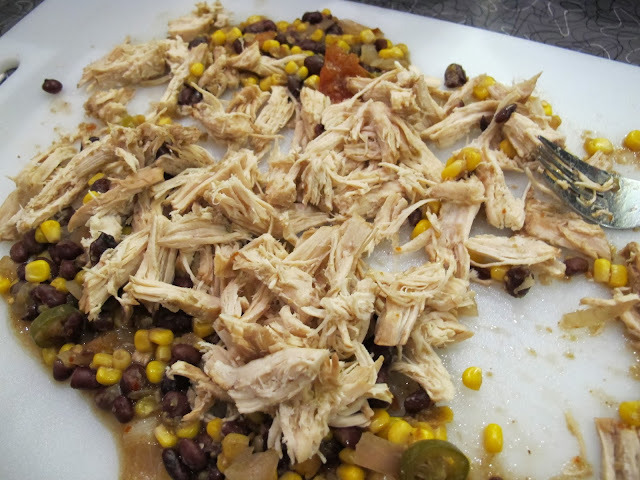 I then pulled out the chicken a couple breasts at a time and pulled it apart easily with two forks. 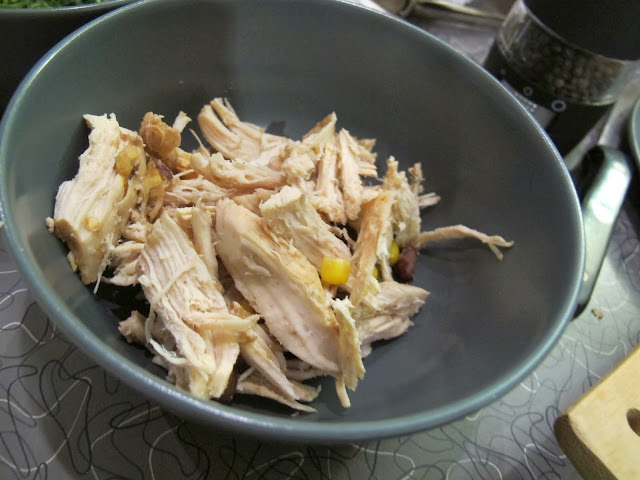 I layered our bowls with chicken first (man did we have a lot of chicken!!)
This made dinner for us for two nights, and breakfast another morning! 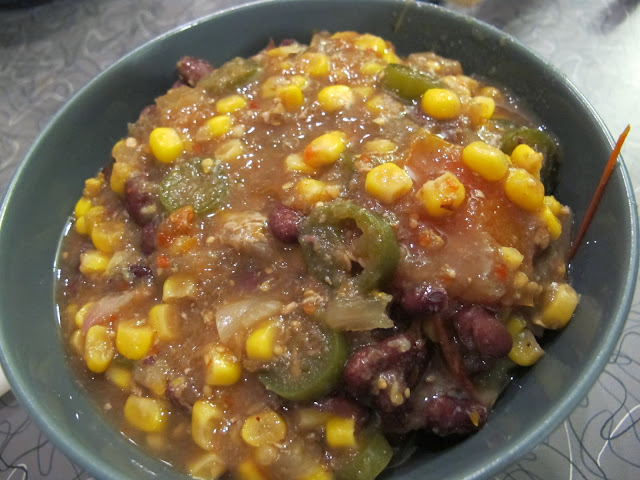 The veggies in the slow cooker topped the chicken gloriously - but I was not yet done! 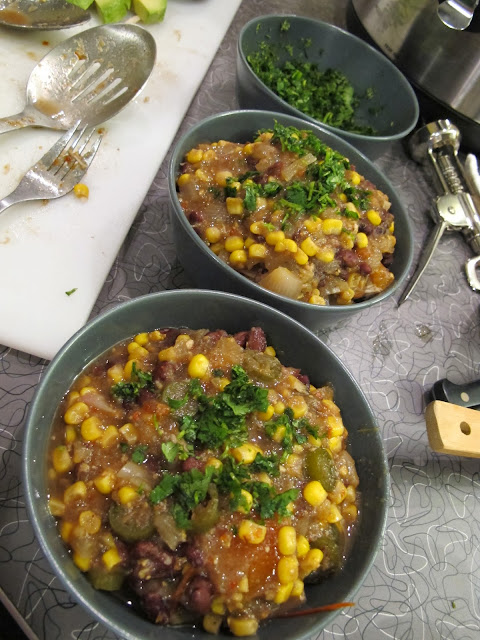 First I added a touch of fresh cilantro to the top - which I regret.
This really didn't work with the dish so I don't suggest it... HOWEVER.... 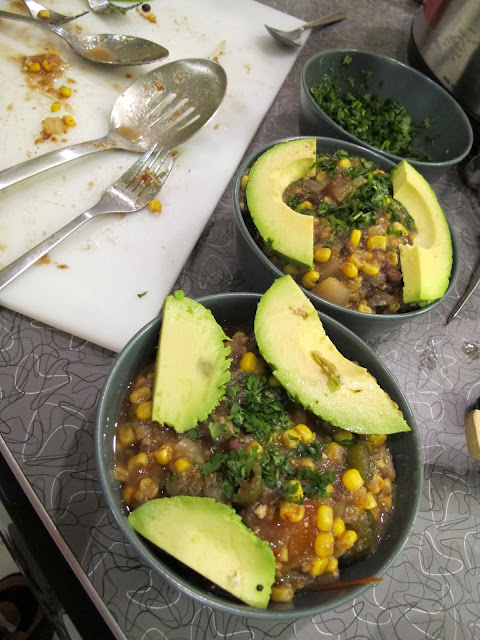 I added delicious avocado to the top of our dishes!  And this, my friends, was glorious beyond words. It somehow took all the exciting, tart, sweet, fun elements of this meal and made them, when eaten with the avocado, awesomely creamy.
Thank you, avocado!

I hope you guys try this at home. It's super easy, very healthy, and can feed you and your familia for quite some time. Budget dining that's good for you?  I think so!

Now for the recipe - Below which will be another recipe for the breakfast omelets I made with this :)

And just to finish off with some more pix, here is what our breakfast looked like a couple days later: 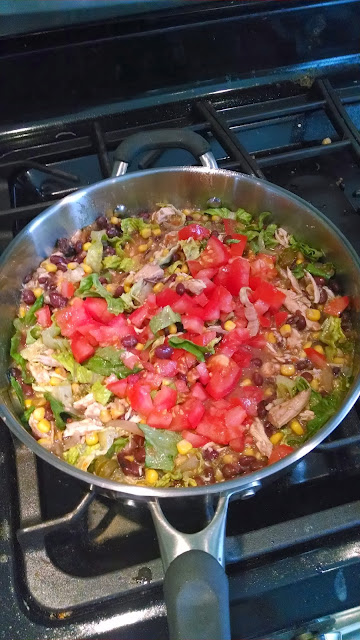 'Twas the weekend and I wanted to make bfast for my hubby!
*aww cute wifey*
(I'm hardly ever that cute of a wifey so ;)
I added some left over hearts of romaine we had (chopped) and another tomato (he loves them!) 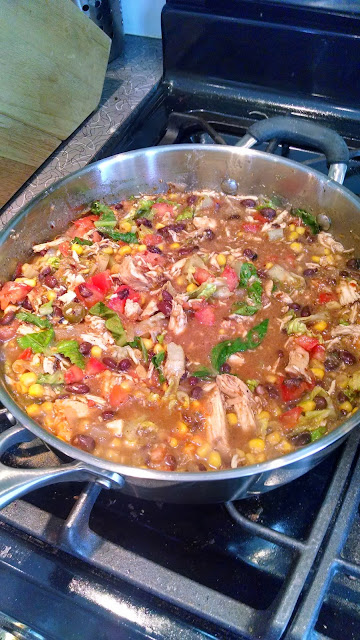 And boy did those veggies prove to be water-filled!
I also added some chili powder and adobo powder, as it's delicious, and let it cook. 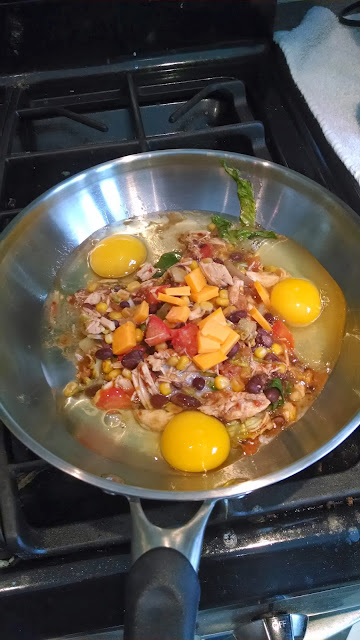 I transferred a small amount to another pan b/c my husband "wasn't very hungry." To this I added three eggs and just a small amount of cheddar - enough to add some creaminess. 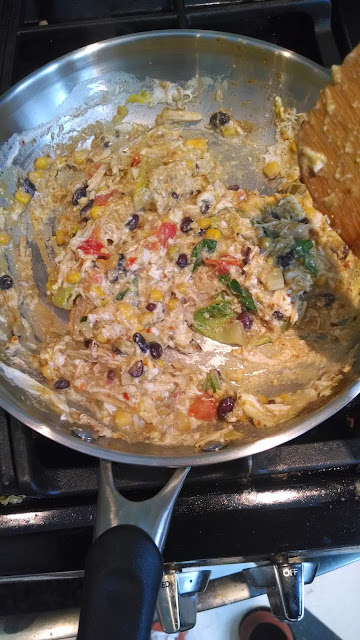 Done and ready to plate! 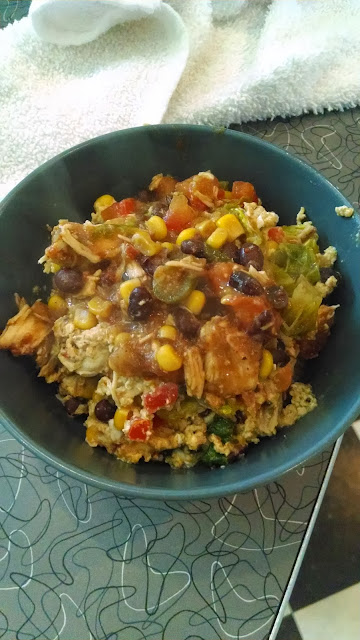 I topped his omelet with a little of the original meal I'd added spices to.
Was he really 'not that hungry'?  Don't ask me - he totally cleaned his bowl!!

Soooo let me know if you try this.
Both recipes are awesome, and awesome for your health, energy, and waistline as well!