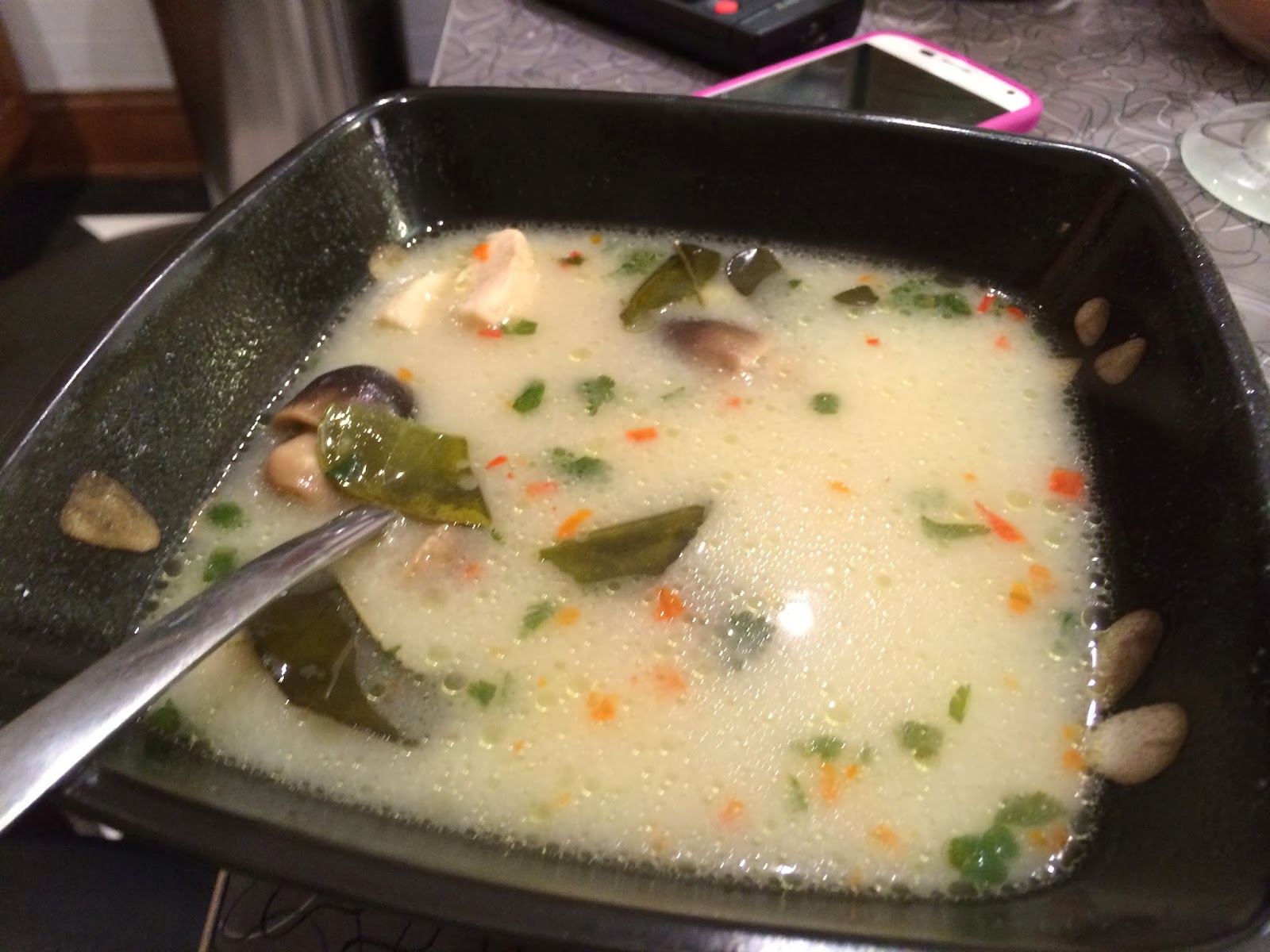 Time for another Cooking With Us - and this time we tackle a Thai dish on our own!

Well, with the exception of my friend Nee answering a question for me via facebook ^-^

What did we whip up?  One of my favorite soups of all time - Tom Kha Kai!  (Aka Tom Kha Gai)

As you can see via the photo on the right, there were more ingredients than I normally saw when eating it for lunch, pretty frequently, in Hell's Kitchen, NY.

As usual I totes suggest you watch the video in high res and full screen!  (Also you can view it on youtube as well.)

After that, come back here for a semi-photo recipe, with the actual recipe below (and transcript as always), as well as what I will do differently next time!

Yummy yummy!
Or as I titled this photo: sluuurrrp! 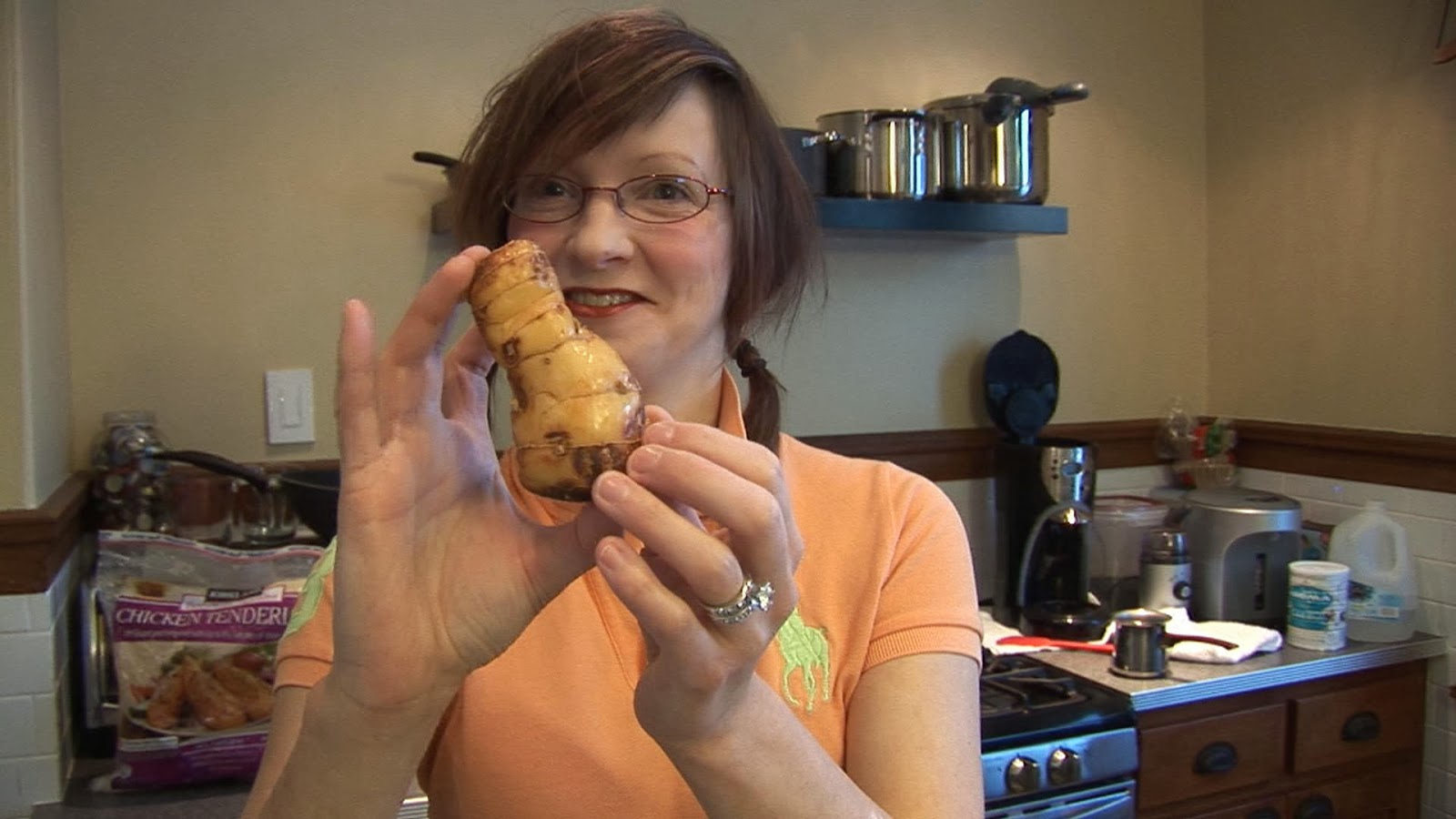 An important thing to note is that Tom Kha Kai literally translates to Soup (Tom) of galangal (Kha) and Chicken (Kai or Gai).  If you don't know what a galangal is, you're not alone.
Apparently it is a root (see above) that is somewhat related to ginger. 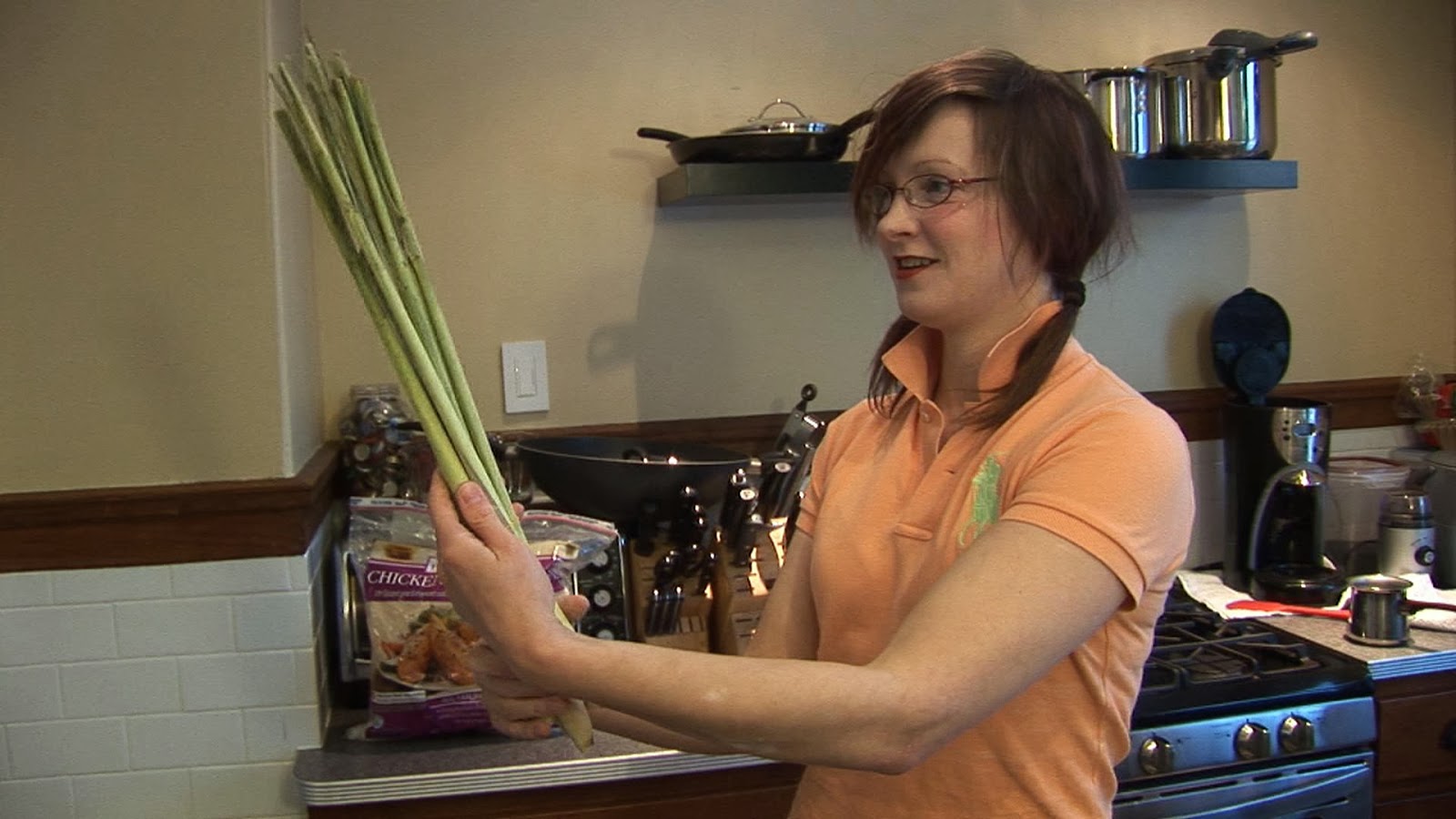 You'll also need lemon grass - but will only use the lower one-third of the stalks.
You will probably need to go to a specialty store for this stuff.
We are lucky to have a good one here! 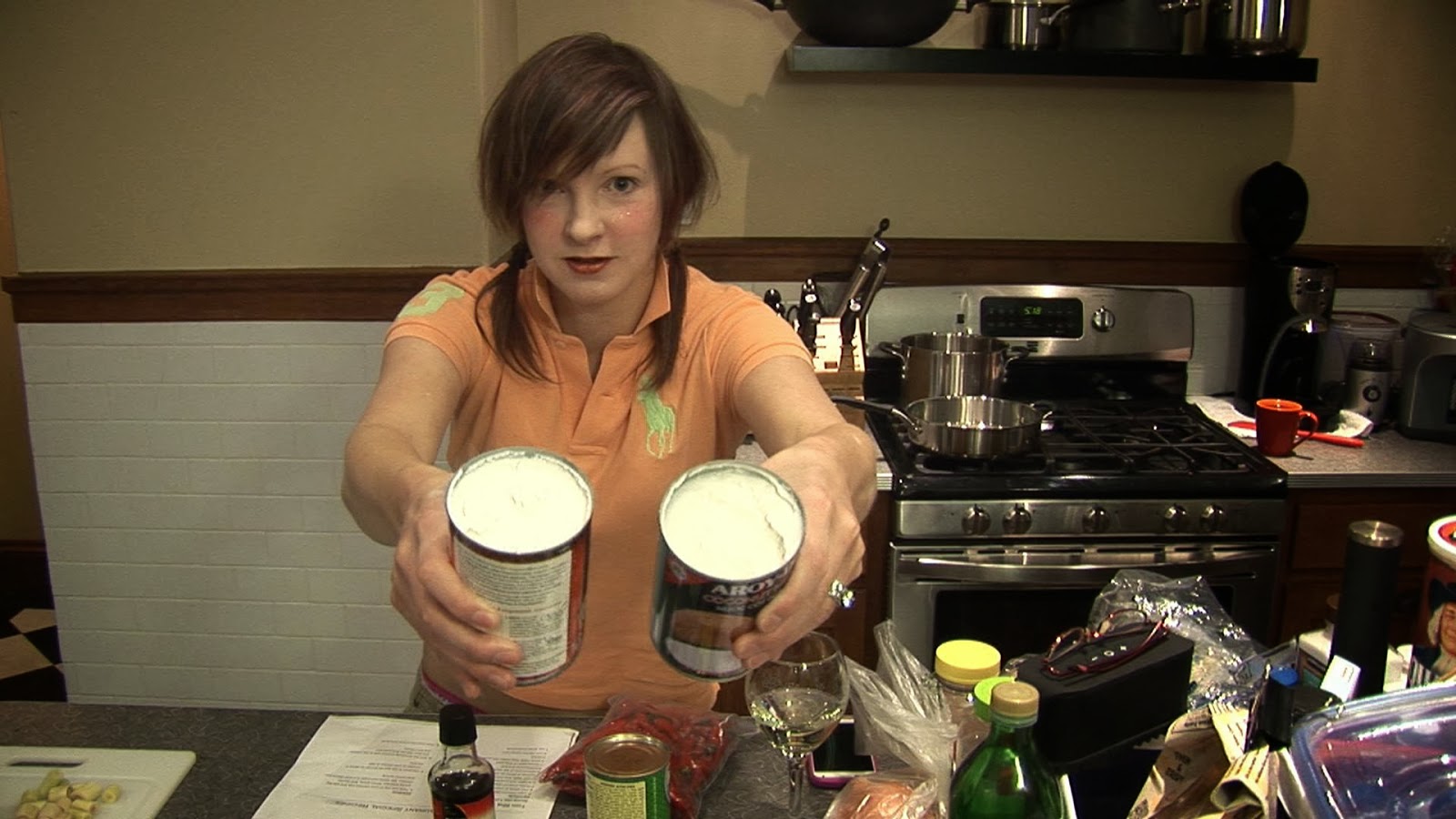 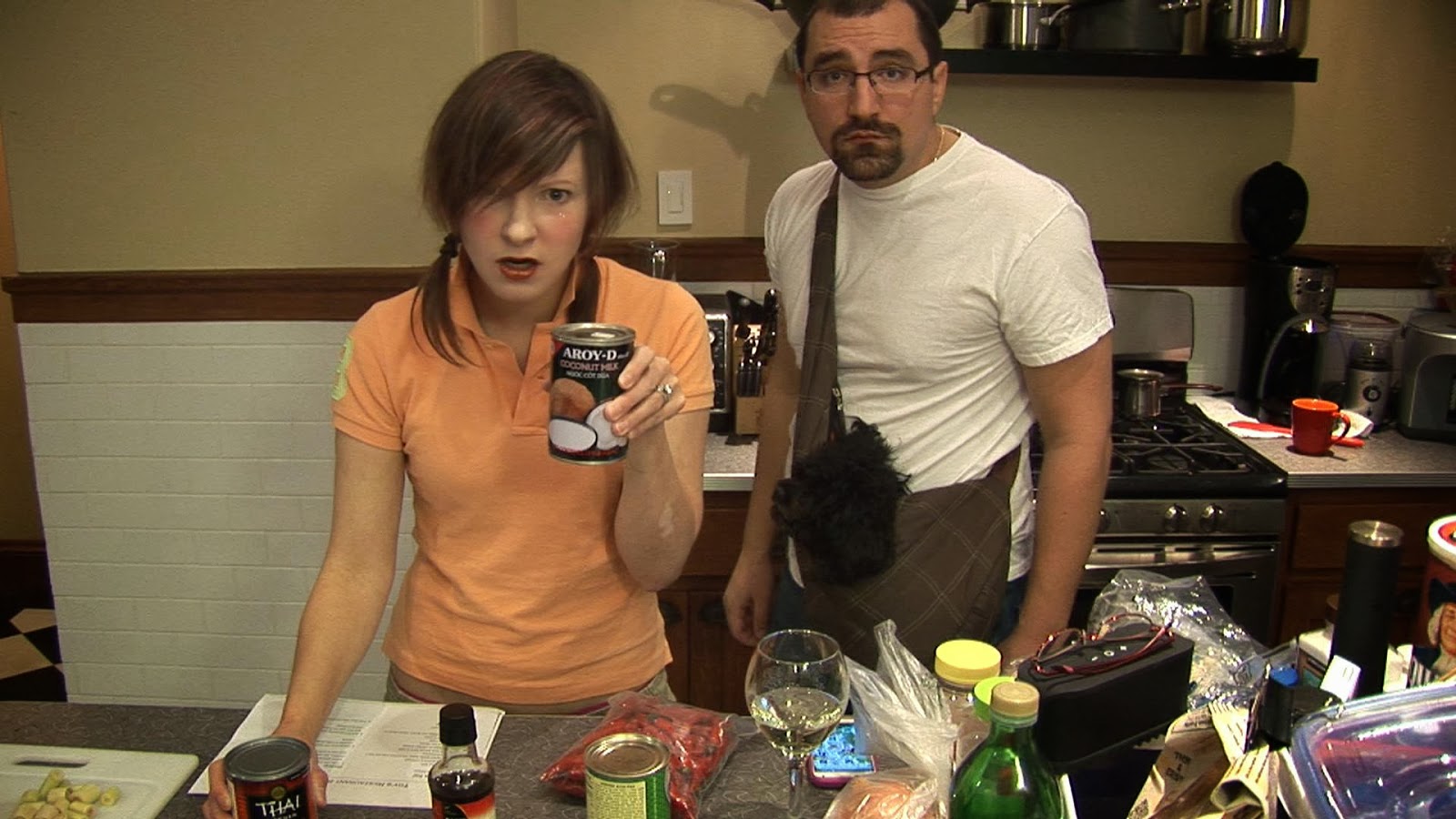 Not gonna lie, I find this photo hilarious.
This was me realizing coconut milk is 700-756 calories/can. ;D
My friend informed me there is low-cal and low-fat coconut milk out there, which I will be looking into!
That being said - deliiiciouuus!! 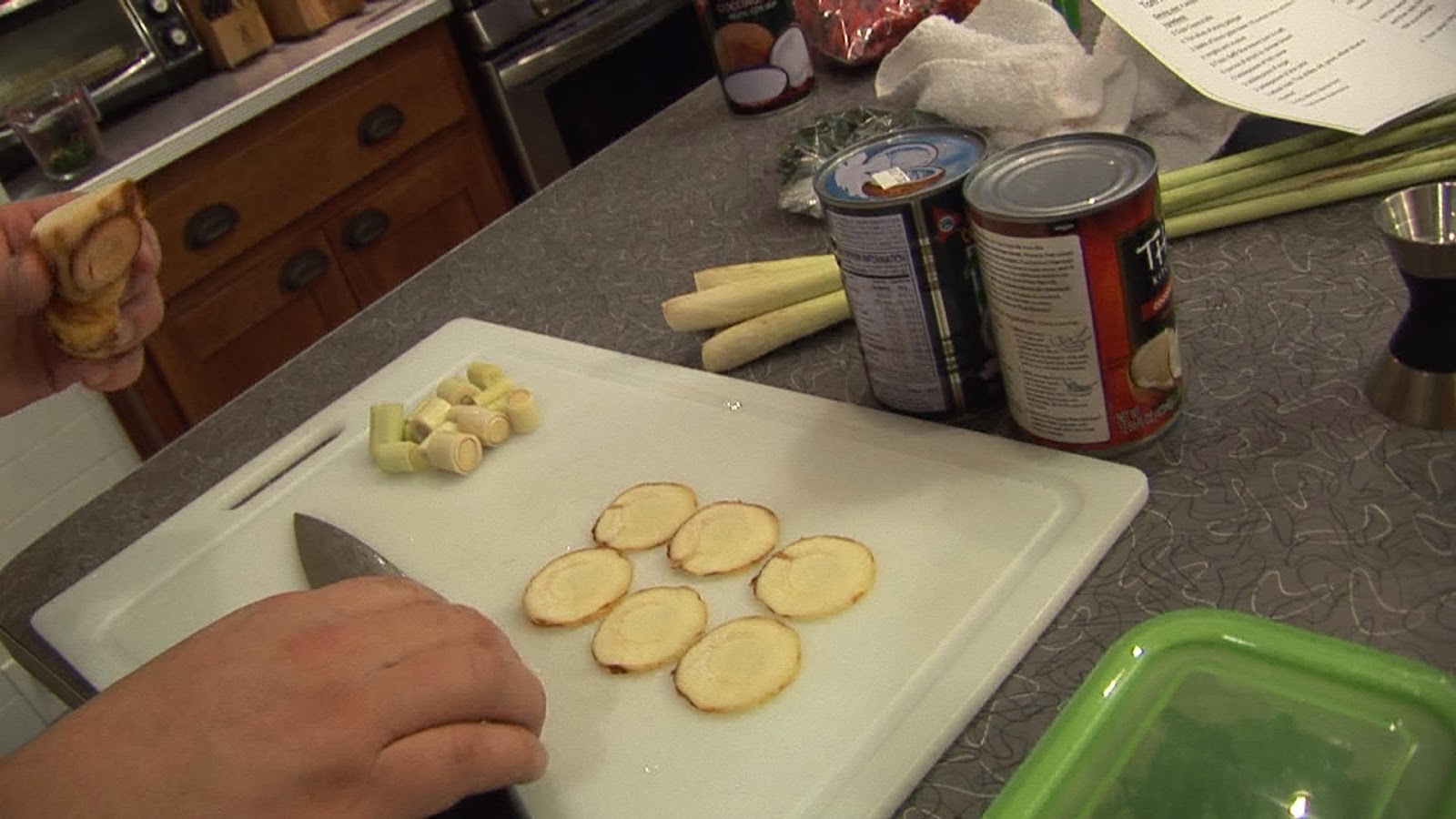 On the left you can see we've chopped the bottom third of 2 lemon grass stalks into 1" pieces, and on the right, we have six thin slices of galangal. 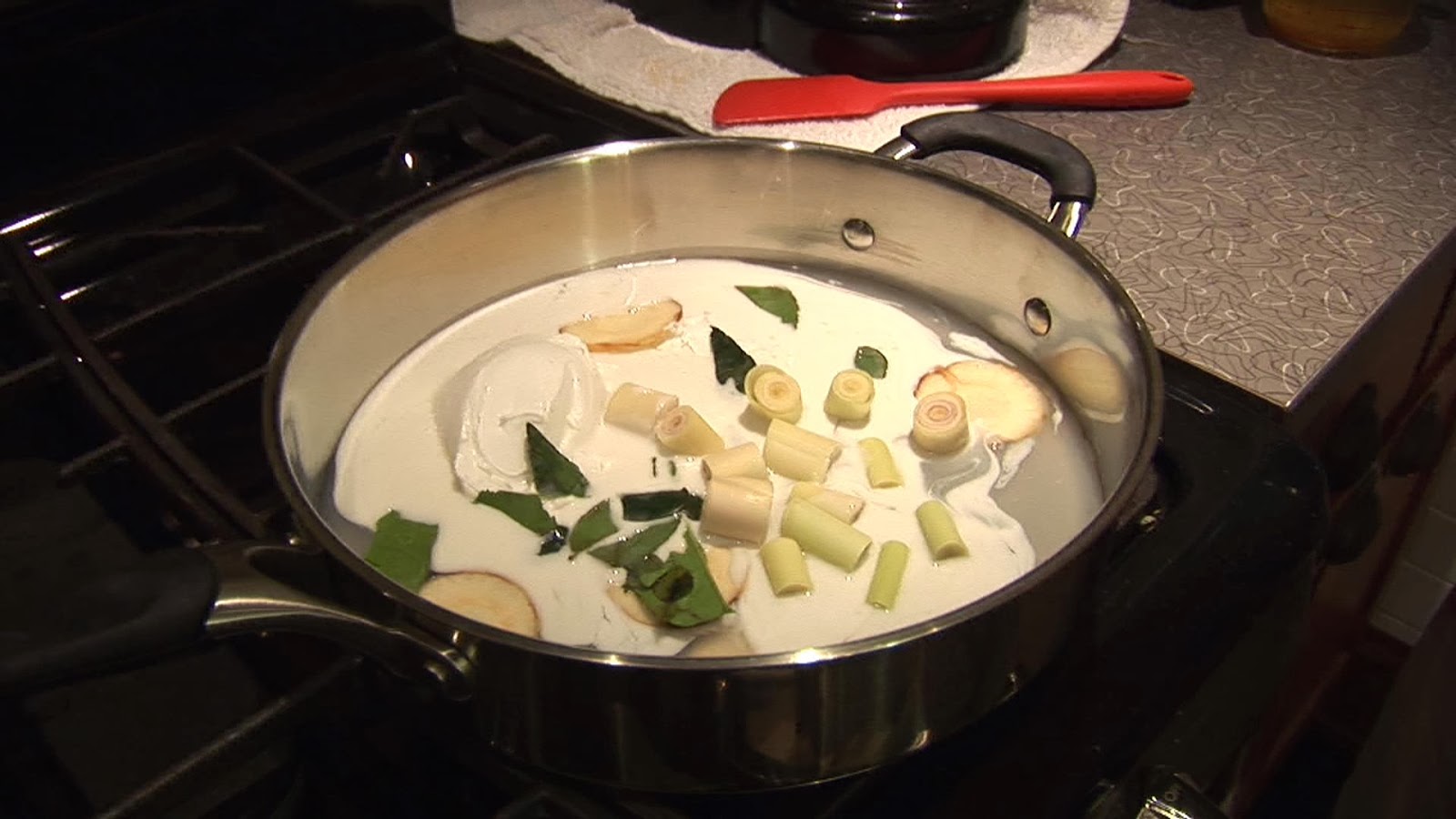 Add 1 cup (or in our case, a whole 14 oz can - woops) of coconut milk to start, as well as your galangal, lemon grass, and some torn Kaffir lime leaves! (Everything smelled fantastic!) 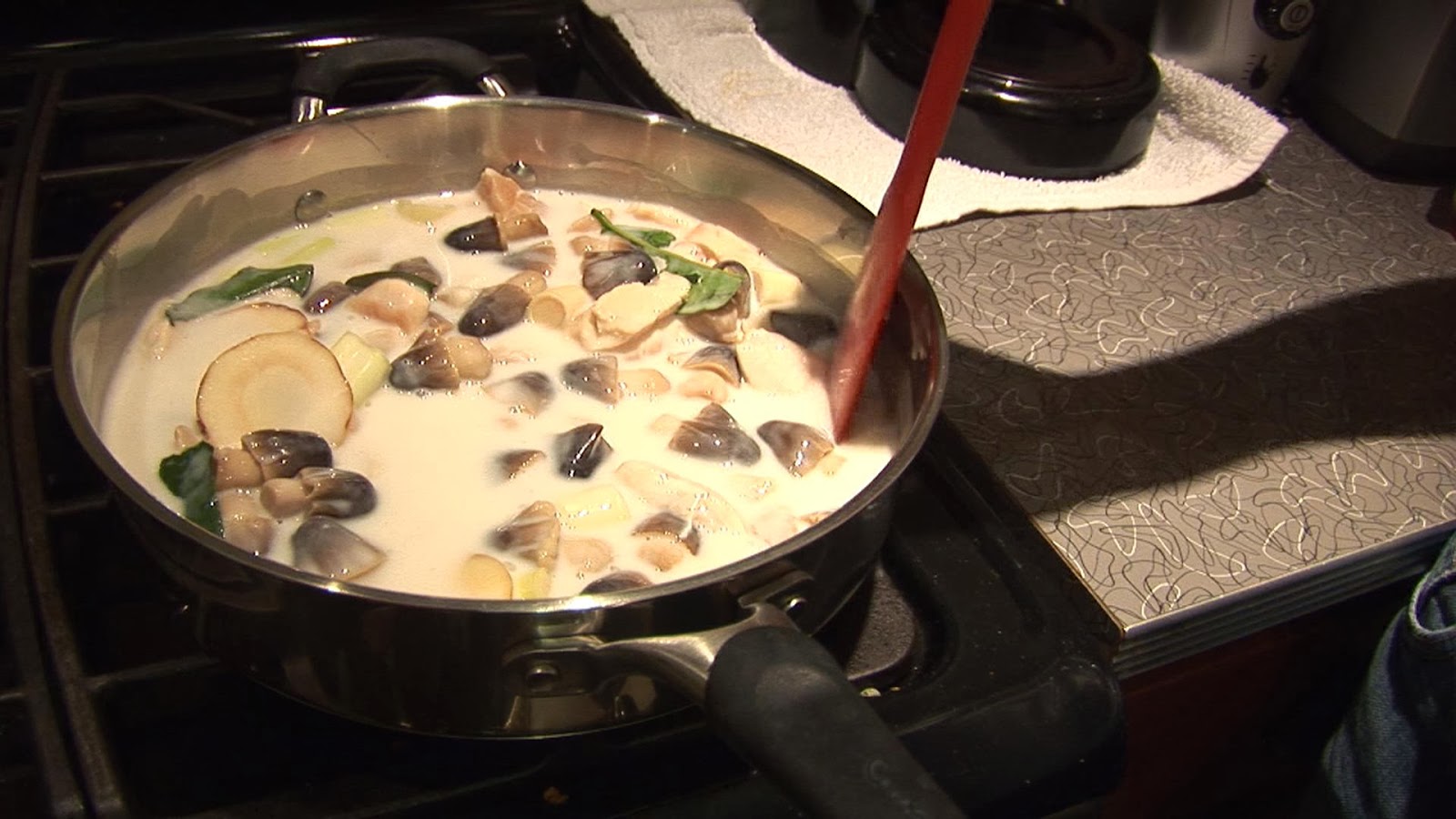 I added a whole can of 'straw mushrooms' because I'm a big fan. Also - our chicken went in too!
At this point we've also added 2 TBSP sugar and 5 TBSP fish sauce! :) 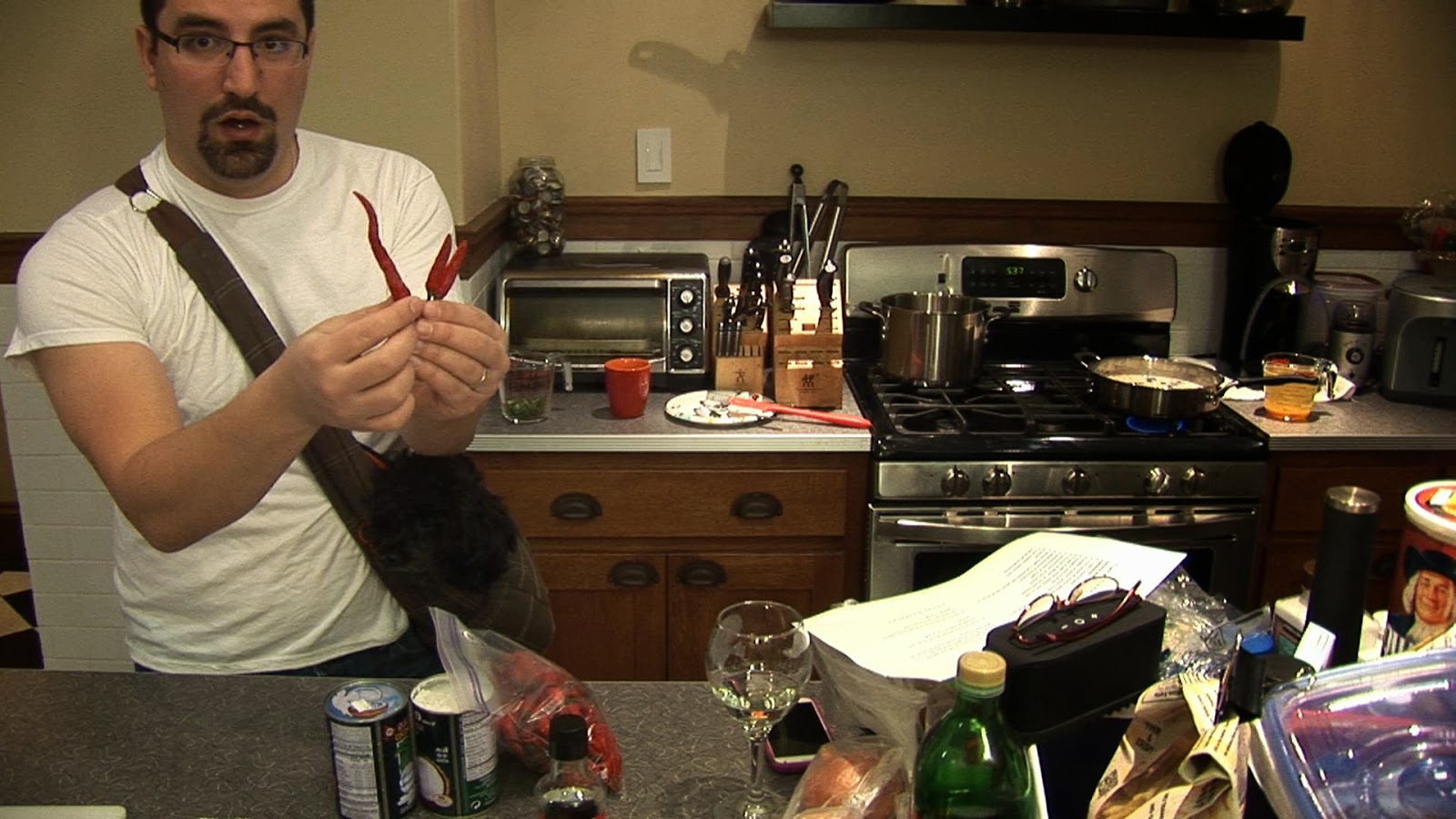 Our recipe called for three Thai chilies, and so we crushed em up! (We being Theron.;) 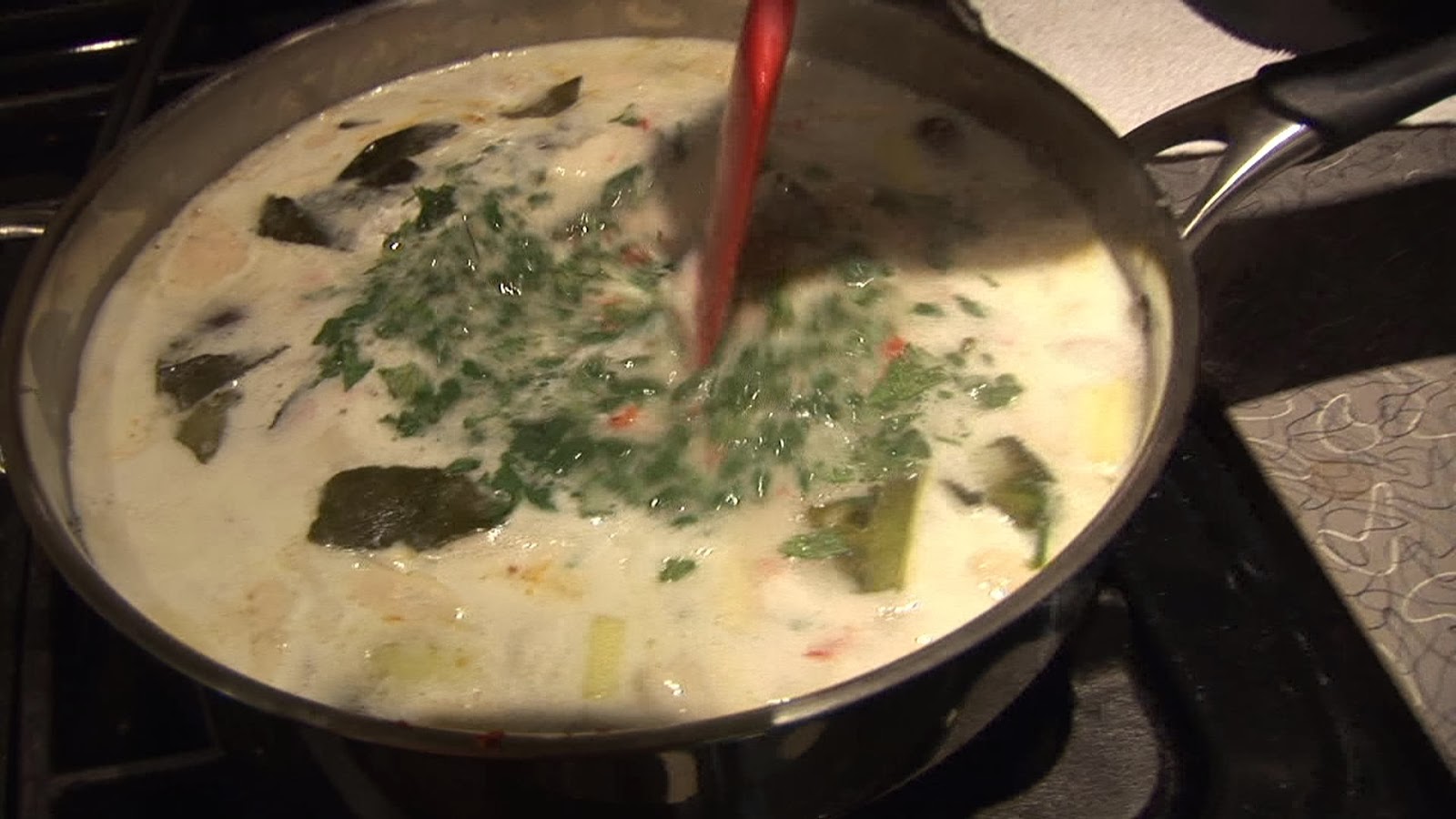 We then added a quarter cup of cilantro, 3 crushed Thai chilies, as well as 2 cups water and 3 cubes chicken bouillon.  Also - 2 TBSP lime juice.
As for me - next time I'll leave out the cilantro and peppers. This soup just doesn't need it.
You also add the rest of your 2 cups coconut milk when your chicken is pretty well cooked. 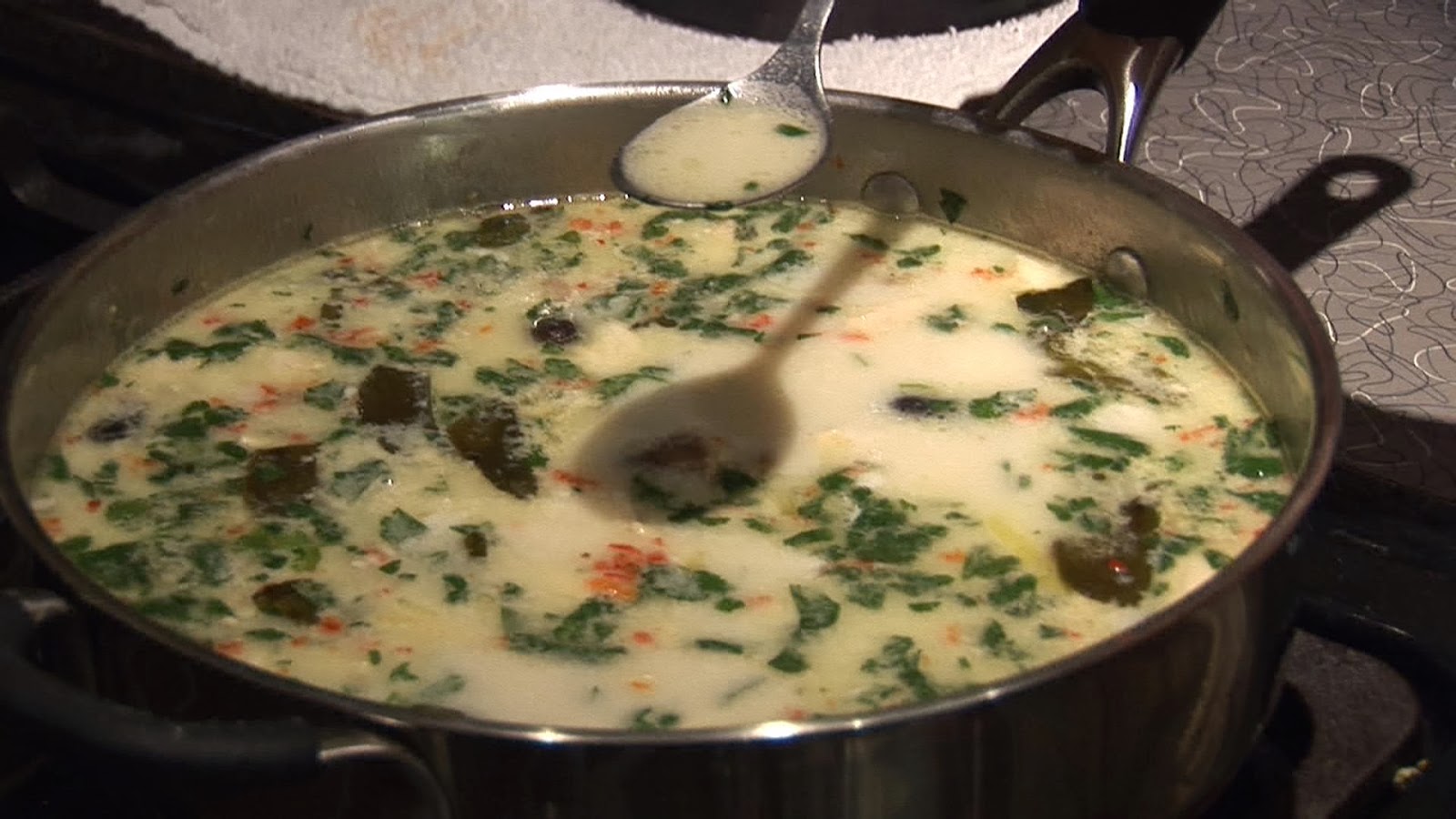 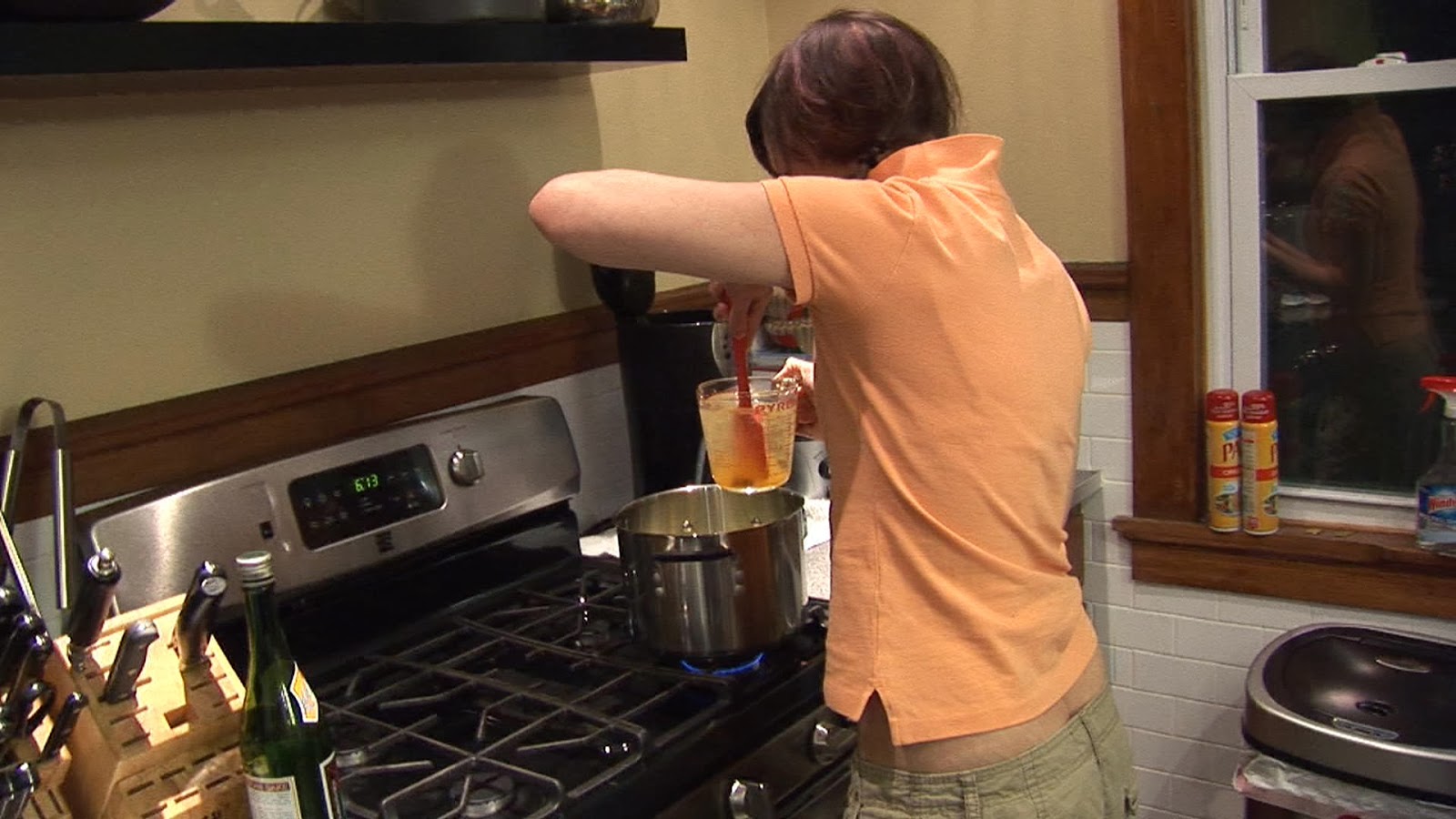 So we added more water, and a bit more bouillon, to try and get the taste right, after transferring it to a large pot. 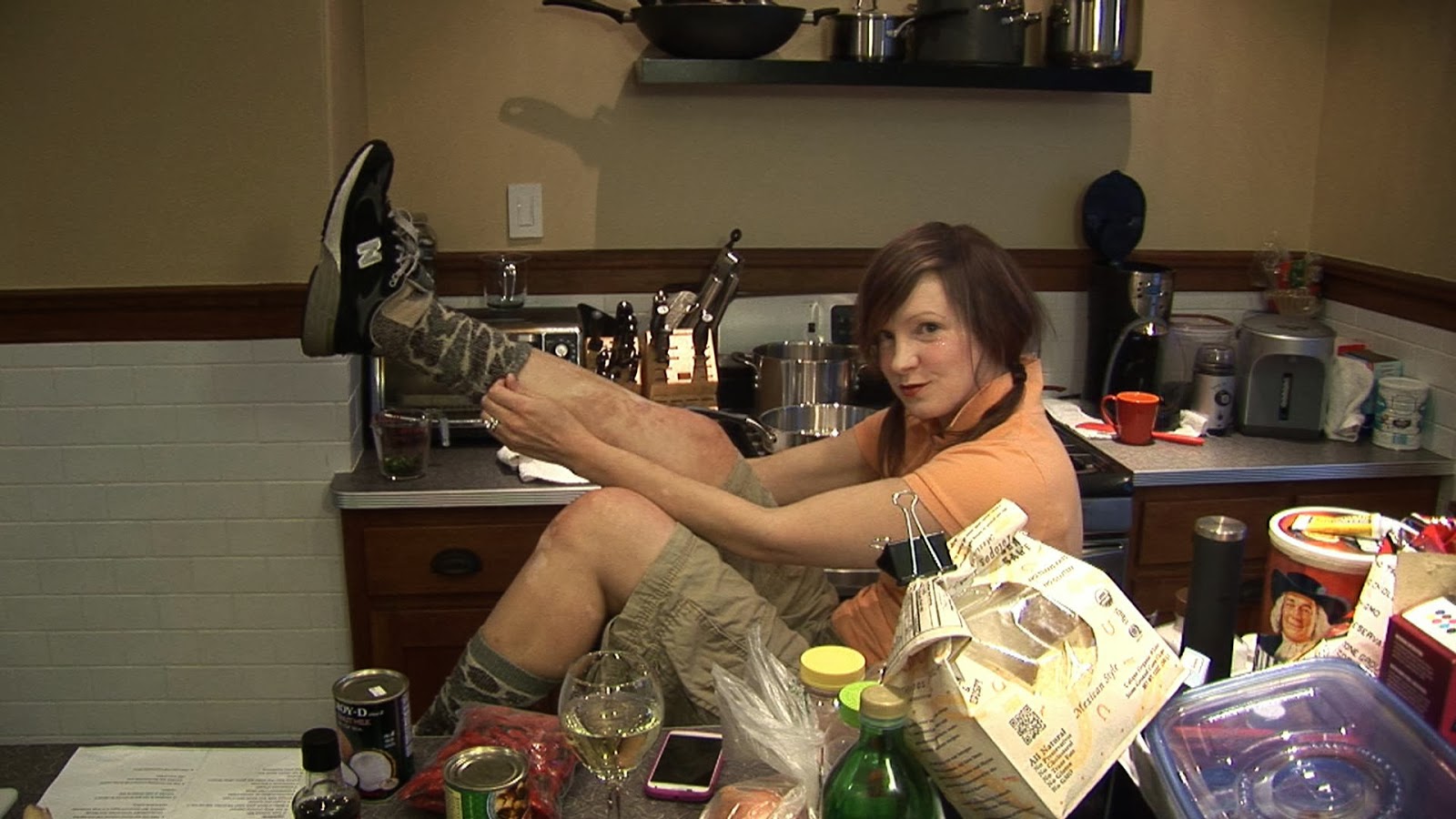 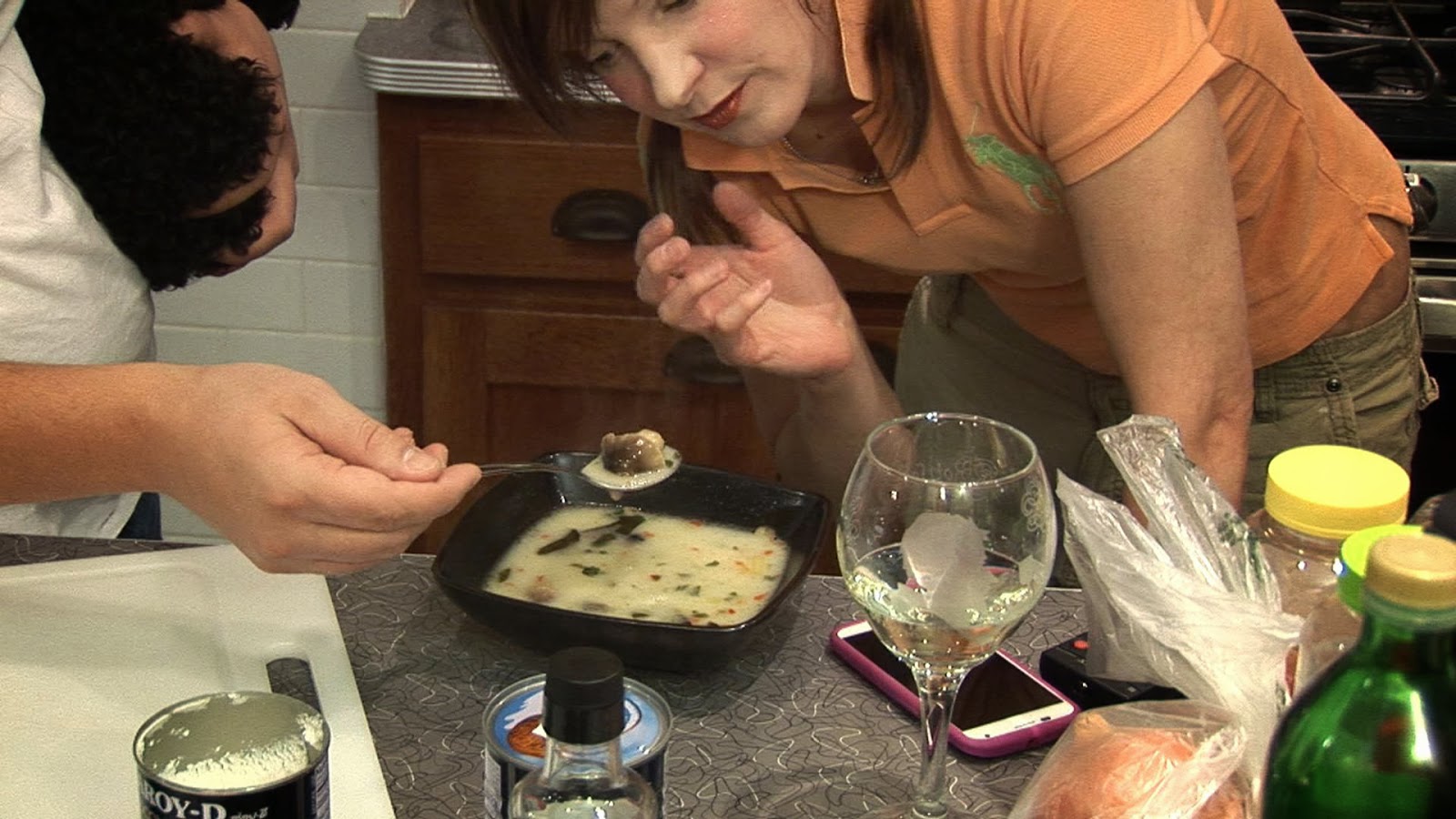 When all is said and done, you wind up with a very broth-forward soup.
Here, Theron pulls out a mushroom from the mix :)

Your finished product will look something like this.  Don't worry, there are chicken and mushrooms in there, but this dish is meant to be more about the broth, I think, than anything else.
(And boy do the galangal, lemon grass, and lime leaves make for some amazing flavors!) 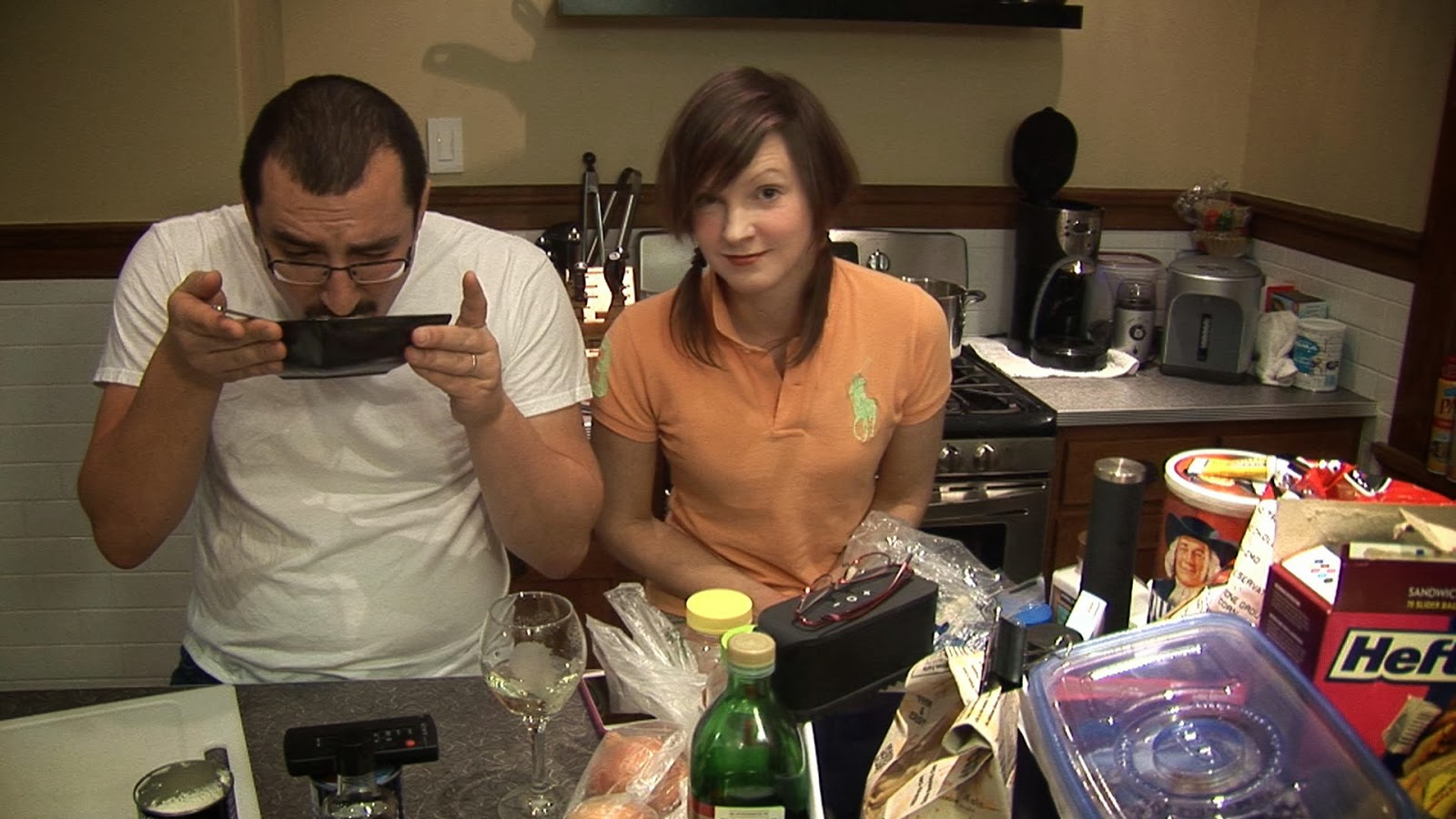 If you have done well, you are likely to hear slurping sounds - as I am hearing in this photo above ;D 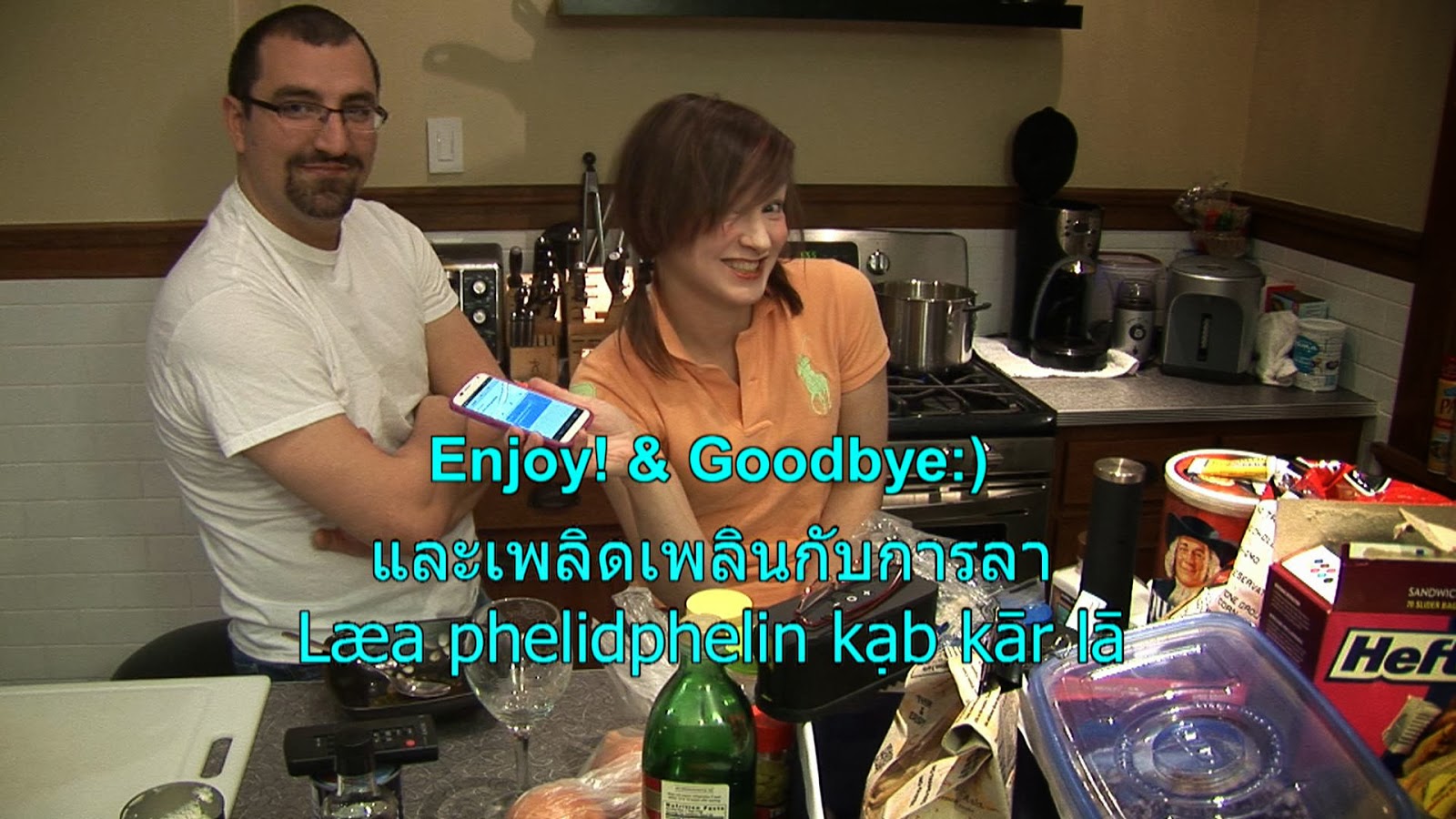 I love the way we ended our podcast. Clearly, Thai is a complicated language to us English speakers - but pretty rad looking, right?!

And now, as usual, for the:
Tom Kha Kai Recipe:

- 2 cups coconut milk (try and find low cal/low fat if you so desire!)
(start with 1 cup in a sauce pan)
To this add:
- the bottom third of 2 stalks lemongrass, cut into 1" slices
- 6 thin slices of galangal
- 8 oz (or more) of chicken (cut into thinner strips)
- 1 can of straw mushrooms

Let this cook for a while, till the chicken is pretty much done.

Transfer to a large pot and add:
- 6 cups of water
- 5 cubes chicken bouillon (if you can - I strongly suggest making a stock out of chicken for this)
- 1/4 cup chopped cilantro (this is up to you, I didn't think it added anything)
- 3 Thai chilies, minced or crushed (again, up to you, I think they take away from the comfort-food element of this soup)
- 2 TBSP lime juice

When it's done, you're ready to eat! You can top this, if you like, with a couple sprigs of cilantro for garnish.

I hope you guys try this and love it as much as we did!

Now, for the video transcript:

Swasdi, Thank you for joining us for Cooking With Us and today we're going to make Tom Kha Kai or Tom Kha Gai depending no what you look at.

Which is... basically translates to...

And this is gonna sound weird...

If you don't know what a galangal is - HaHa - Cause I didn't, basically it looks a lot like ginger.

You're gonna need this, which guys, this is what lemon grass looks like.

You need that, you need fresh chilies - They're Thai chilis and they're hot, so...

That, and of course the ever-present fish sauce!

You're the star.
You always trick me.

Look at my awesome outfit.

Look at my socks with my tennis shoes.

So what are you cutting up right now?
lemon grass.

into one inch.. slices.. one inch? yeah

We slice that into six really thing slices.
six? mhm
That's one.

This freaking can of coconut milk has 700 calories.

This can of coconut milk has 765 calories!!

So you're gonna take a cup, so, like, here-ish of this to start.
We can measure it.
And put it in a sauce pan.

Wasn't the stuff she brought over mo-mo..
Oh there's the milk.

So we add that, we add six slices of the galangal.

Five lime leaves, torn in half.

So you break them in half?
Yeah

Putting in our lemon grass as well.

And then you add the chicken...

Just a spoonful of sugar helps the tom kha kai go down.

With this you cook to boiling.

Alright I'm gonna call BS on this recipe 'cause it doesn't say anything about chicken broth...

I'm gonna put a whole can 'cause like the mushrooms they're my favorite.

I don't think that you can go wrong if you add all the ingredients at one -
Whoa!

We can crush up these in the mean time.
Ok!

This is my friend Nee, she answered my facebook plea...

I asked do you use just coconut milk or also chicken broth and she said 'Both!' so, both it is.

We just added two cups of water with three cubes of chicken bouillon in it.

Honestly I've never had this taste spicy at all so I'm weirded out by the fact we're putting chilies in it but...

Put the cilantro in there I guess...

But it's ok, it's gonna be super-concentrated.

Will you come taste this?

We should put it in one of those big pots.
Let's do that.

Pouring objects into other objects, is me... although this may prove to be a disadvantage...

This is the Alfredo sauce of Thai soups!

Two more chicken bouillon cubes
- that's fine, I know what you did.

The distilled water, yeah.
Yeah there we go.

Fill it up.
Two cups, two cups then?

We added six more cups of water to the original two cups of coconut milk... and with that we added actually five cubes of chicken bouillon.

Ours, we've added so much water to - it's still very greasy.

So we're gonna finish our podcast now, with a bite of actual food, not just the broth... ready?

That was a yummy mushroom.
It's so good. Oh so good!

We nailed it?
Bam!

I hope you guys um... try this recipe.

We totally nailed this one.
Thank you for joining us on this episode of Cooking With Us for the Tom Kha Kai...

So I say to you.....
Laea phelidphelin kab kar la.