So, I recently reached out to my Facebook friends to ask what they'd like to see made on my blog.

My friend Jay was the first to reply - with a request of steak with peppers... more specifically, flank steak!

My husband is very much *not* a fan of flank steak.  Still, he is usually up for a challenge. He married me, after all, didn't he?

He was also feeling under the weather so wasn't in a mood to argue. His only stipulation was that I get the meat from Meisfeld's - our local meat market. No problemo!

What follows is our attempt at slow cooking a 2lb flank steak in a ton of deliciousness (veggies, salsas, beer), which we started way too late in the day.

As always, please watch the video in high res.
Even my sister, Vanessa, makes an 'appearance' via cell phone :) 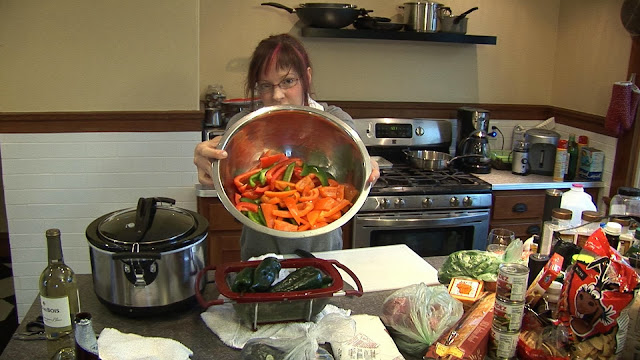 First, I cut up quite a lot of bell peppers.
I did this cause I'm guessing the Mexican steak my mom used to order came with them! 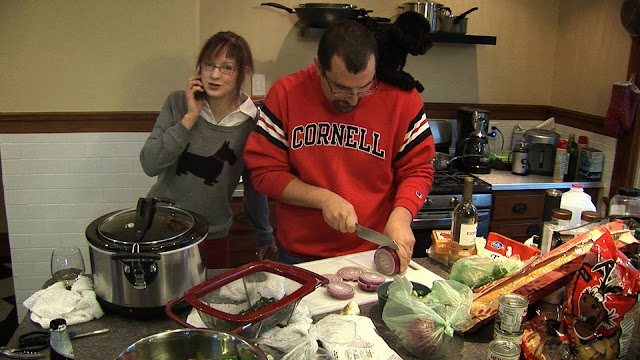 Then Theron cut up two red (purple!) onions, while Nessy and I chatted.
(Watch the video if you want to hear her say Hi, and also confirm red onions are TRULY purple!) 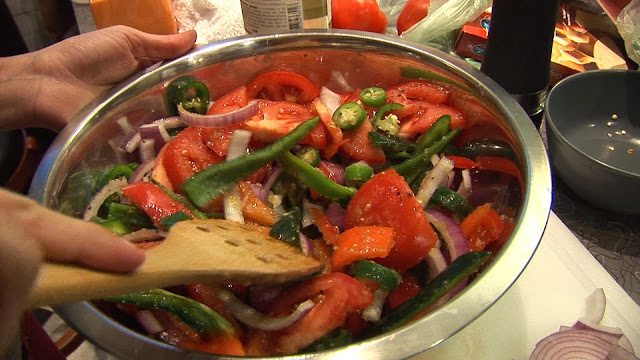 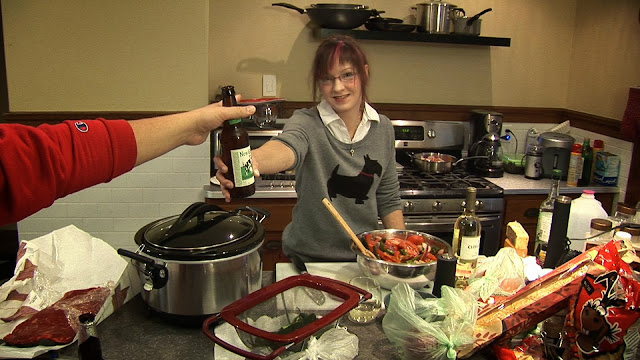 My husband suggested adding some beer, so.. why not? 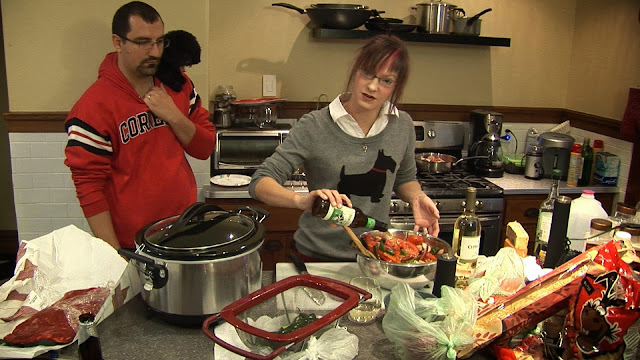 My face when he said, "use the whole bottle." Okie dokie.
This is Spotted Cow by New Glarus brewing, which can't be bought outside of Wisconsin at the moment! 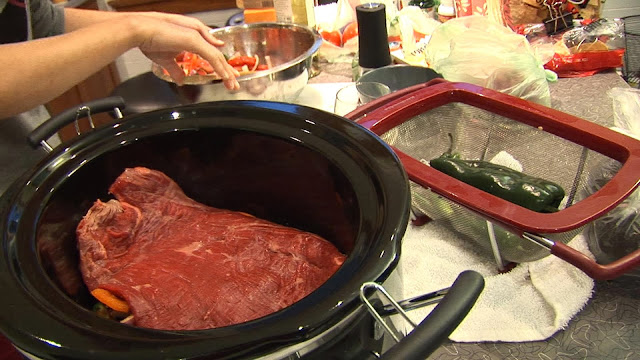 First I put in some of our veggie mix, then the 2lb flank steak... 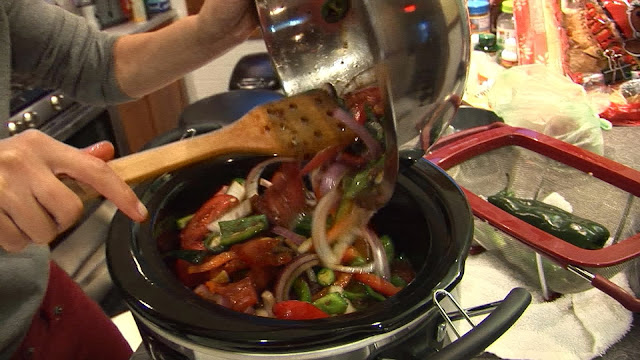 And topped it with the rest of our mixture. It looked gorgeous!
Now, if you are doing this right, you're going to cook this on low heat for 5-6 hours. 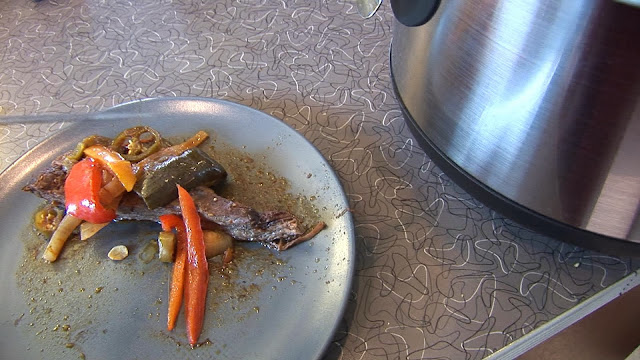 A small portion of the finished product, topped with bell peppers, jalapenos, serranos, and onions. 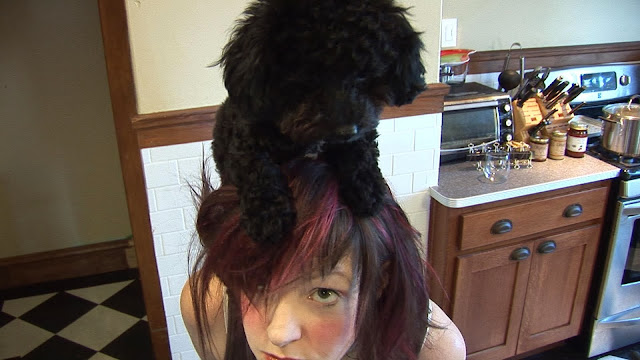 Me and Brigly that next morning, as that's when I had to finish the podcast.
By the time the steak was done cooking, Theron and I had found other foodstuffs to scavenge!
Another piece of advice - don't slow cook late, when you're starving.

Combine all ingredients, add into your slow cooker with the flank steak, be patient.

Hi, and welcome to cooking at home with us.
I'm kind of modeling this off of when I was a kid, and we would go to this restaurant called 'Beef and Bourbon'... My mom would always order the Mexican Steak and it would come with onions, and peppers, and I'm pretty sure bell peppers were on top of it.

Ok I cut up all of my bell peppers. I also got a lot of poblanos cause I thought it might be interesting. Per Jay's request I got some jalapenos and also some serranos. I cute up three poblanos and about a cup of peppers, hot peppers.

Hey Ness how ya doin?

Say Hi to Jay and everyone else on the podcast.

"Hi Jay and everyone else on the podcast."

Yes, Theron's cutting up two purple... are they called red onions? They're red onions, two red onions. Though they are purple.

This is two pounds of flank steak.

So my husband cut up for me... three garlic cloves, that are going in here. I've added some salt and pepper.

Should we put tomato or no, what.. would it be weird? It wouldn't be bad right? We're making steak.
I think tomatoes would be good.

I should put this in here?

Per my husband's request we're gonna use some of this New Glarus Spotted Cow that we bought at the store.
You can't get this outside of Wisconsin so just use your favorite.  I'm putting it in here... I'm not sure how much I'm gonna put in.

I'm gonna put in all of it.

So now we're putting this all into our slow cooker.

Oh, that's all the liquid.
That's ok cause, I mean...
It's gonna go to the bottom anyway.
Yeah.

So maybe I didn't even need to add all the um, cans of stuff because I wonder if the vegetables would have made kind of a soup on their own.

It's clearly the next day.
I mean, clearly it's done, it's been cooking for like, ever.
It cooked... maybe five hours last night, something like that, and then two hours this morning.

Wow, even though it cooked in all those spices it doesn't have a lot of spice. I mean it's juicy... but not spicy.

I mean when you take bites with the stuff on it, it's amazing. So...

Give me your suggestions... Probably one of them is, start slow-cooking in the morning.

Thank you for joining us for cooking with us. This is Brigly and Val! saying bye bye.