Yes Mum? A scone with clotted cream and jam?

AKA - we try to make some after the jump.

Ah the scone... And if you're British, Scottish, Canadian, or Australian you might have just read that as 'scohn' - well, interesting, ye olde Brits! (And the like...)
For those of you who follow mi blog, you know I'm a wee lassy of the [German]-Irish descent living in the Good Old US of A, where we pronounce it Skown :)

I found the pronunciation divergence funny as I was watching a podcast on how to make scones the other day. (OK, I watched maybe 3 minutes of it... it was really boring)... but that's neither here nor there.  Point is, she said, "today we are making scohns." ORLY?

The first time I think I had a scone was at a McDonald's in Paris.  Yes, you read that right... It was nearly our last morning there, and I didn't feel like fighting to decide what I wanted for breakfast.  I honestly can't say whether or not, before that point, I'd ever even eaten Mcy D's for breakfast. So it was, at the ripe old age of 17, I walked into a McDonald's near Les Halles and ordered what they then called the "Maxi McMorning Sucré."  I recall it came with many things, and as it's been 16 years (erg), my memory has become vague... but for the sake of my teenage remembrance, it had pancakes, an english muffin, and a scone.  I remember the scone.  As I said, I think it was my first.


Later on, in our early 20's, my sister got super into baking. She was a whizz and would bake all sorts of things, but what do you think I requested even more than her amazing Irish soda bread?  Scones!  Darn tootin'!

So,... for no obvious reason I can think of, aside from a book I'm writing being set in Paris and the foods that my characters are enjoying, when my husband told me he had to go in and work a 2 AM till whenever shift to update some software with his team, I thought "I should bake scones for him to take!"  Brilliant!

First of all - unlike my sister, I am not a baker. I can put pre-made cookie dough on a baking sheet and not burn the cookies, and I can put crescent rolls on a sheet as well, to the same effect.  Other than a few beef wellingtons (which is an entirely different sort of baking), I was not gifted with that gene.  That being said, I still thought it might be fun to try... when my husband was home to help me.

I found and printed two fairly divergent scone recipes, packed up my little helper Brigly, and hit the supermarket.
So there we were, with me looking at both recipes and picking things higgledy piggledy from both.  Disaster may well have been waiting.

Luckily not long after I arrived home my husband, Theron, said he was on his way as well. *phew*  You see, when we married, he's the one who brought the mixer into the relationship.  Again, I don't bake.   With that, and with an adapted recipe of sorts, we started on our scone-making adventure.

I want to mention that I felt the need to curl my hair and put on fake tattoos for this cooking foray.  Baking! Scones!  It all seemed so very 'house-wifey' to me... and wouldn't a modern baking-scones-type-housewife be the type with (probably Rockabilly) curls and (real) tattoos? Yes!

I'll cut to the chase ("finally") and say we wound up with a super tasty scone-like pastry.  It was sweet, delicious, but a bit too dense I'd think.  Also, I went with the recipe that said to pour the dough into a 8" baking pan because it was easier than the concept of rolling it out and what not :P

The complete recipe will follow my photo-essay of sorts;)


So both recipes called for 'all-purpose' flour, but that's pretty much where the similarities ended. 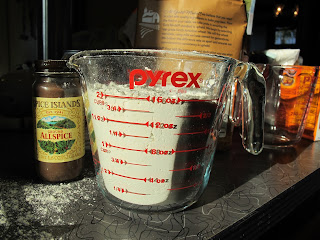 So instead of dealing with the 'other stuff' (rolled oats, whole wheat flour, corn meal...)
we just decided to go with 2 cups of all-purpose white flour. Yes, the bad-for-you kind. 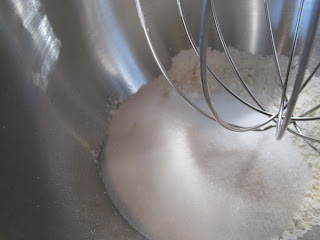 Then we added about half a cup of white sugar (we are truly terrible people!) 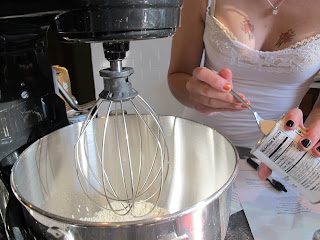 Next came two teaspoons of baking powder (and a gratuitous cleavage shot).
One recipe called for baking soda, would that have helped to make it lighter?  Baking type people?
I don't know. 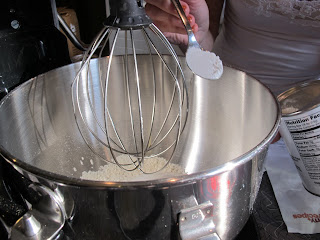 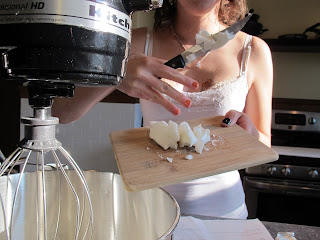 Here's where I got really into my 'to heck with the recipes!' mode - as one called for margarine, shortening and something called "butter extract" and another called for massive amounts of butter... so I just put in 4 tablespoons of vegetable shortening (on the package it said it could be used in place of butter or margarine) - a win win!!  This is me trying to show that that's 4 Tbsps;) 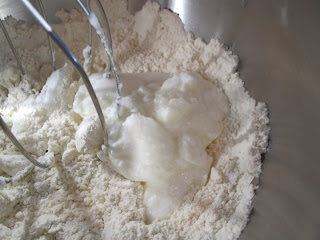 Then we added 16 oz of plain nonfat yogurt.
At this point the mixture got all gloopy like, with the shortening stuck to the middle.
(No surprise, it did say mix in with a 'pastry blender or 2 knives' but that wasn't going to stop our laziness!) 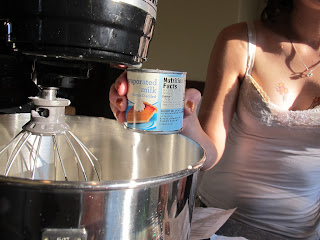 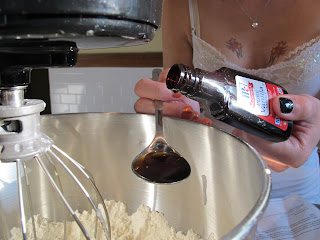 Then came one of my favorites - vanilla extract! I put in 1 tablespoon then thought, aww heck,
if one is good, two is decidedly better!  And I would probably add even more next time. (I love vanilla!)


Do you see?  Do you see this wonderfulness I'm putting in here?
"How much did that jar cost?" Theron asks...
Can we really put a price on deliciousness... oh, we can?  Moving along... 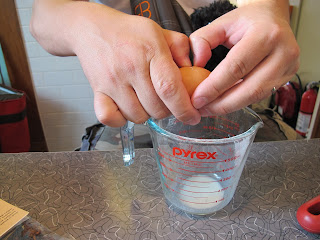 Here's where my not reading the recipe completely might have been a mistake. It called for 1 egg white, so we put in one egg white... After finishing the dough, I realized the egg white was meant to go on top... Woopsie! 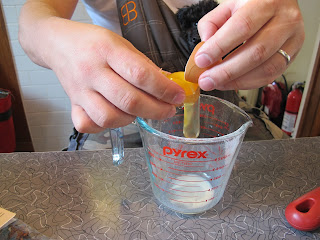 Theron separates like a pro!
And Brigly, in his Brigly sac, is watching intently. 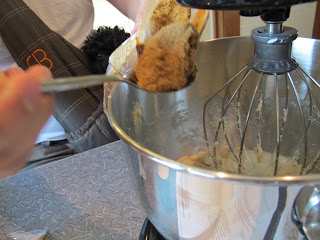 In goes brown sugar... because, why not.
Me: "How much brown sugar are you putting in?"
Theron: "A bit."
Well, that's helpful. 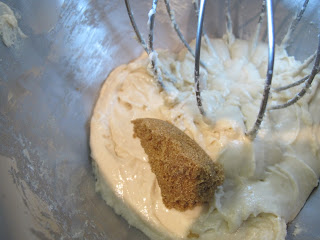 Theron's 'a bit' of brown sugar. 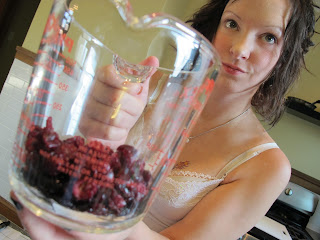 The part I was most excited about (as you can clearly see from my face) -
adding in dried cherries and blueberries. Yum yum YUMMERS!
The recipe called for 3/4 cup but I clearly added a cup (about).
You can also see my curls had all fallen. Boo on you humidity! 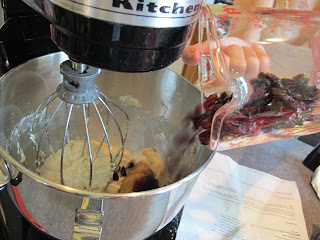 Go in, my lovelies!  And please be good. 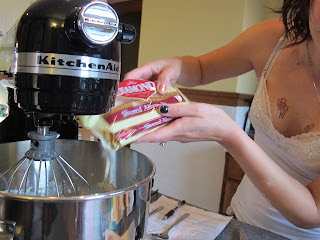 And you too, almond slivers, in you go! Yay! 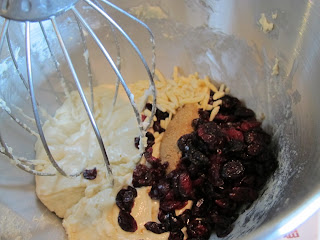 At this point I'd like to point out I had become confused.
When I lived in New Jersey there was a place in Boonton that had the most amazing biscotti
- cherry and vanilla biscotti with almond slivers.
Yeah... I was getting biscotti and scones all mixed up in my mind.
I blame my mom for loving both of them - that has to be where the confusion came from.
Darnit Mom!! 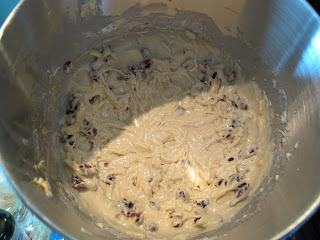 At last! Our mixture is done! 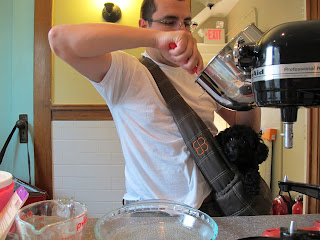 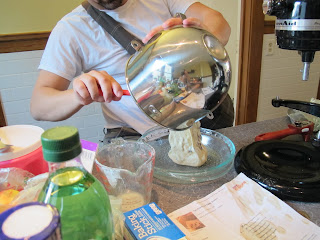 In you go, the easy way!
"Pat dough into 8 inch round cake pan" I am not making this up! 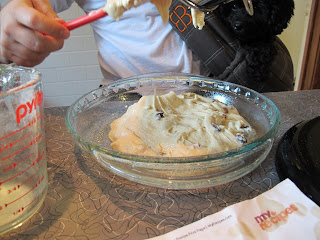 Plug for MyRecipes.com - though we barely followed it ^-^ 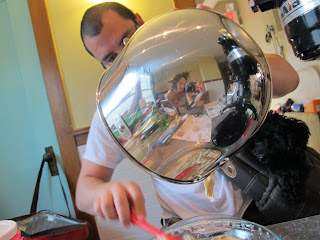 Me too me too *mirror* 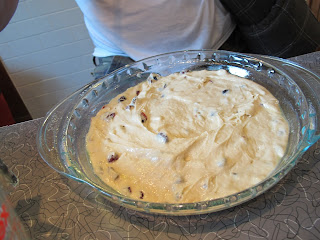 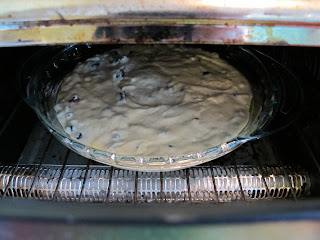 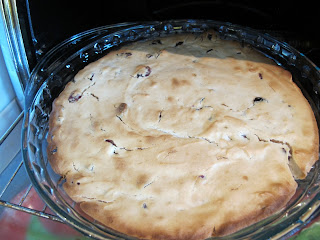 After 20 minutes (it smelled amazing) but... 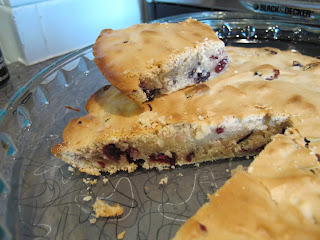 The inside was still a bit doughy so we put it in for another 10. 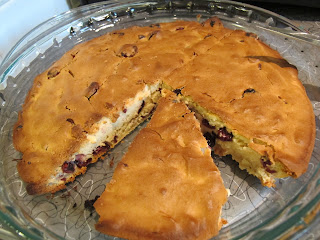 And it came out - Deeeelicious.


So, while it was odd and irregular and slapdash as all get out, I would still chalk my first scone-making attempt up to being a success. We ate some last night and this morning, less than a quarter remains!  Now, I do realize my husband has a sweet-tooth, but I still think this was pretty darn good. If only Mom and Ness were here to taste and lend a hand :)  Next time?

Coming up very soon on my blog:
How I make pico de gallo and guacamole, what we ate it on the other night, and how you might vary it :)

Val! & Theron's Scone Recipe (of sorts):
(feel free to make changes and let me know if they turn out better!)

We combined everything as we went, even the egg which was supposed to be brushed on top of the dough once it was put in a pan. Also, you're supposed to sprinkle the top with sugar, which I didn't realize as I'd stopped reading ^-^