Cooking With Us: e29: Beet and Chickpea Salad

Welcome to another episode of Cooking With Us!

This time we decided to make something super healthy using beets - which is typically thought of as a summer vegetable, but is pretty grow-able all year round, especially in more northern climes!

So I made a "salad" of sorts using beets, chickpeas, and a variety of other goodies!
What you get is something healthy, flavorful and delicious served warm or cold!


As always, the photo essay, recipe, and transcript are after the jump! 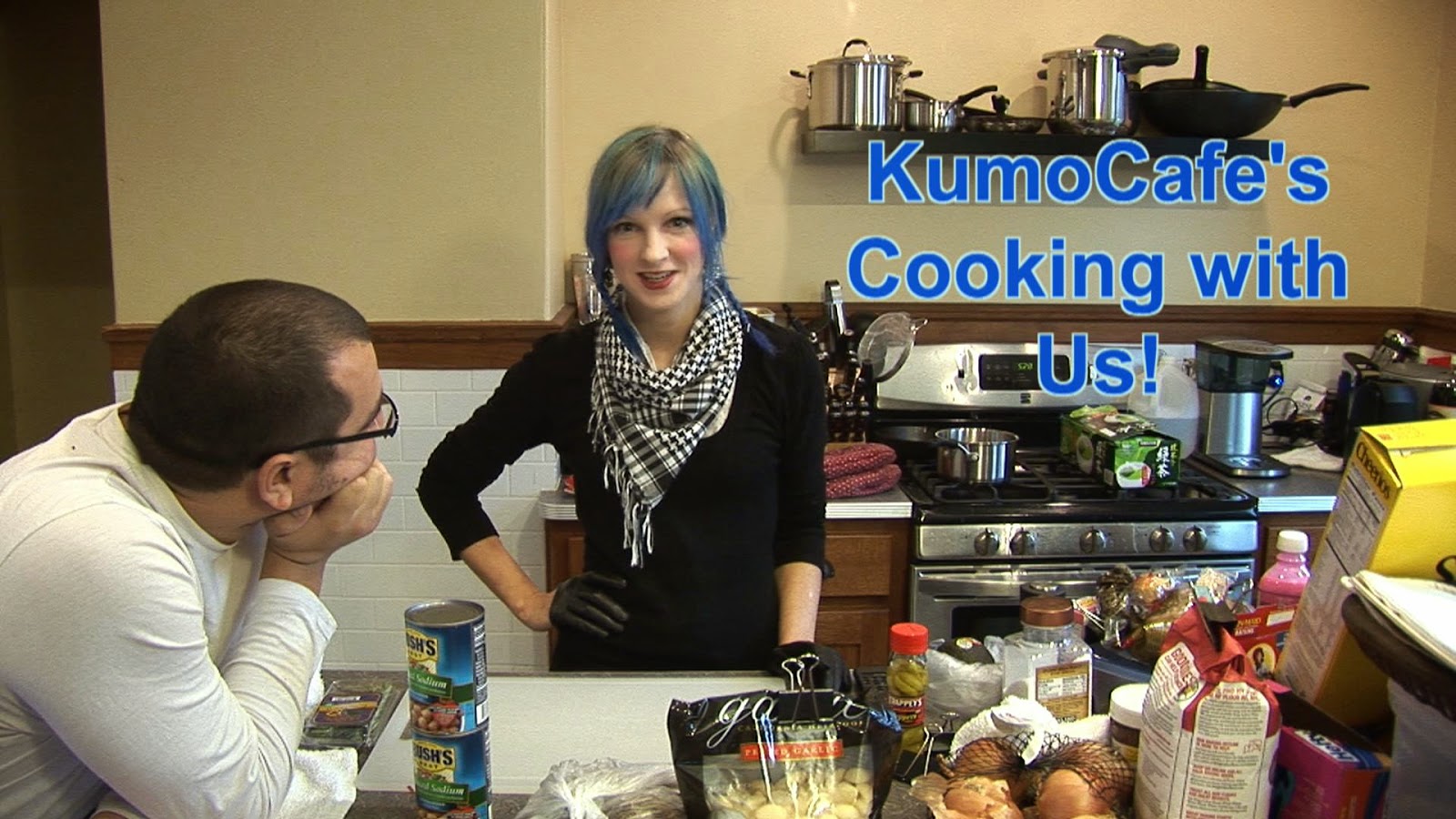 Yes I dyed my hair, and I wanted to point out my awesome gloves!
I got them from one of my fave stores, which you should definitely check out!
(https://www.etsy.com/shop/runnickyrun) 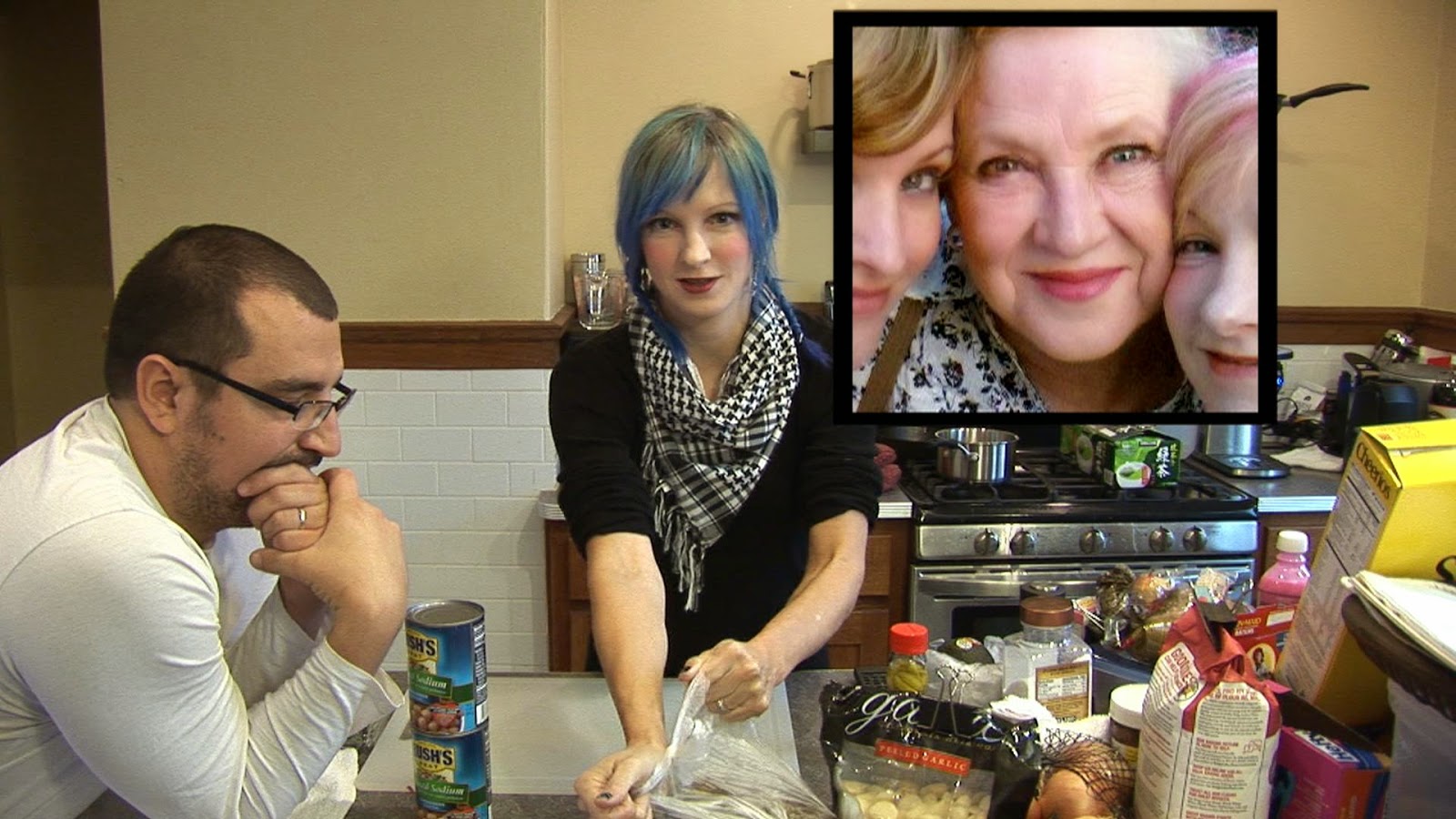 Clearly, beets are hugely important in this recipe, so I had call out my mom!
She is a passionate hater of beets - and boy is she missing out!
(Try the stuff you don't like every now and again, right mom?) 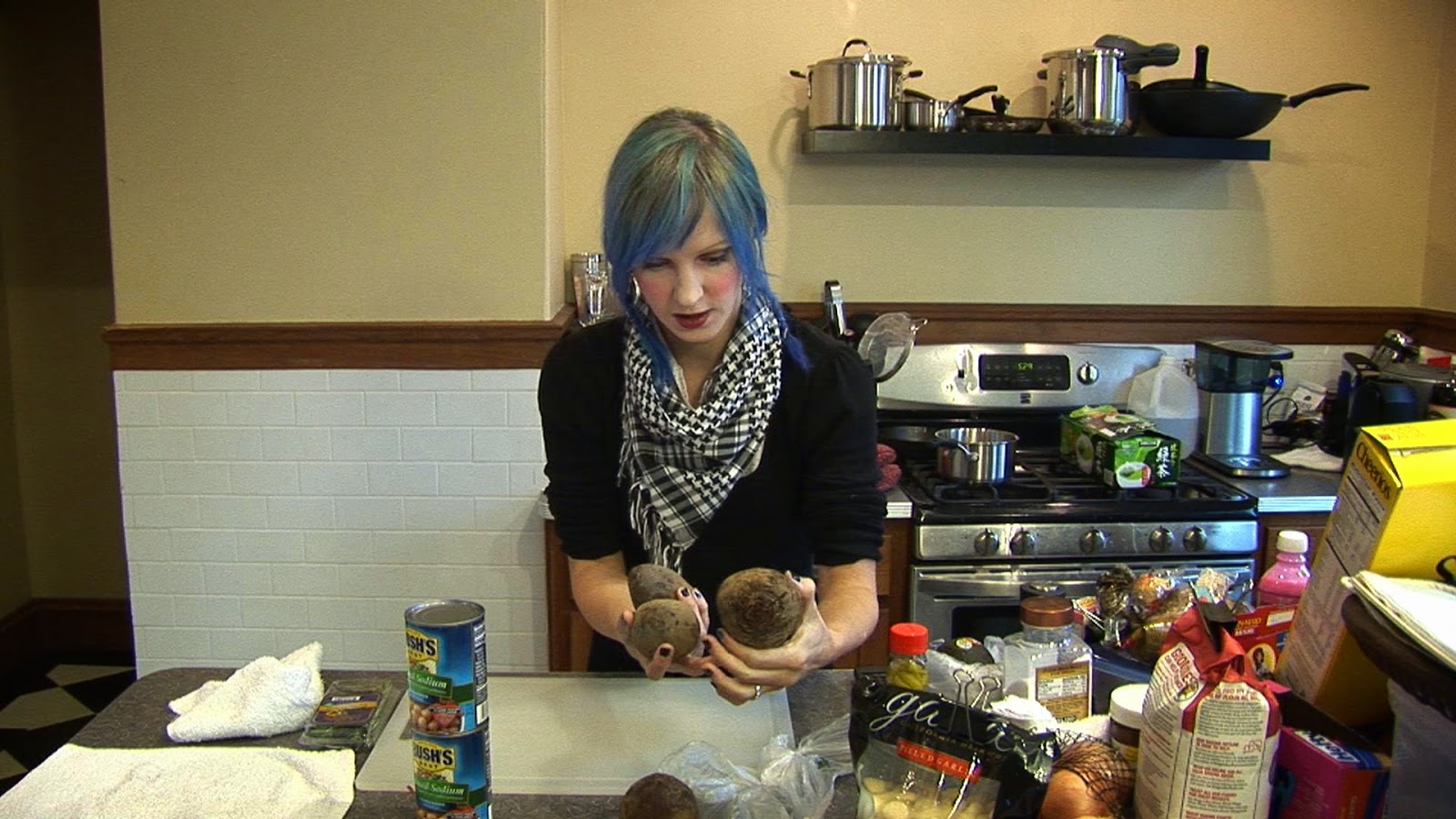 First, rinse the heads of your beets.
This time I used three beets, but the first time I made this I used two.
It's really up to you! 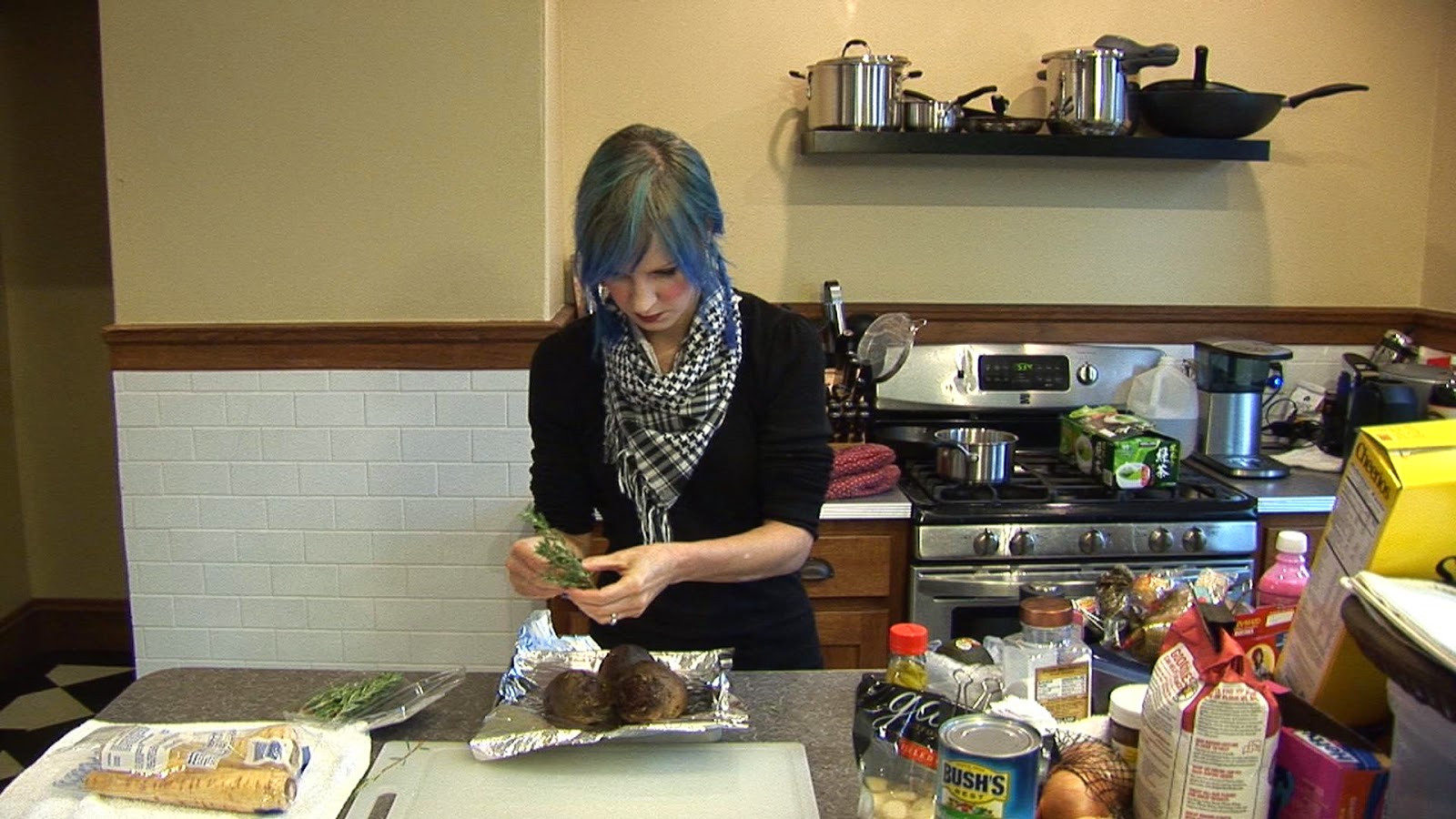 Line your baking tray with tin foil, and get out your rosemary!
Sprinkle on a sprig or more of rosemary.
(Again, this is to your taste. My taste happens to adore rosemary!) 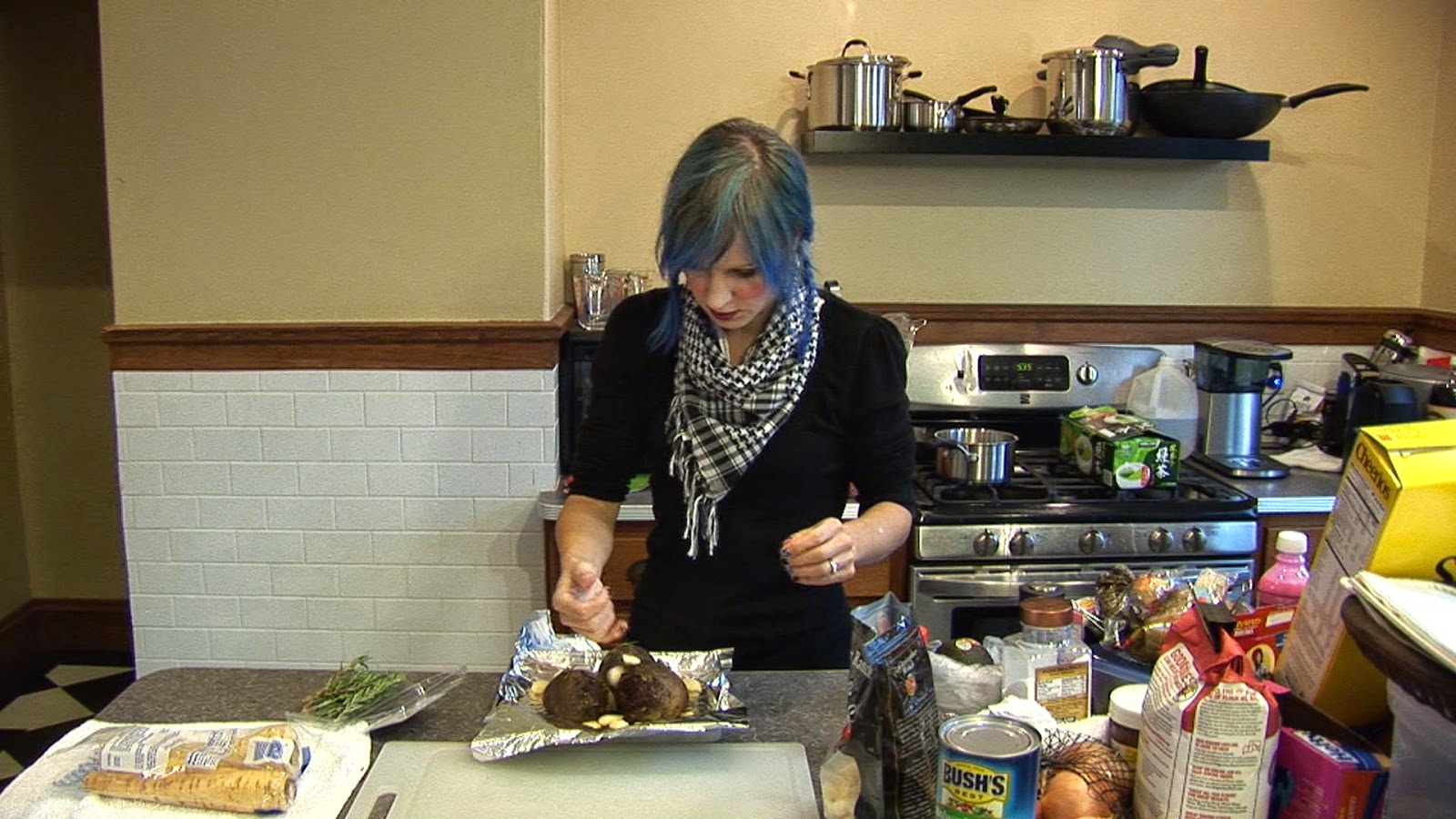 Now add several cloves of garlic.
We love all these ingredients, and you probably already know I go overboard with garlic! 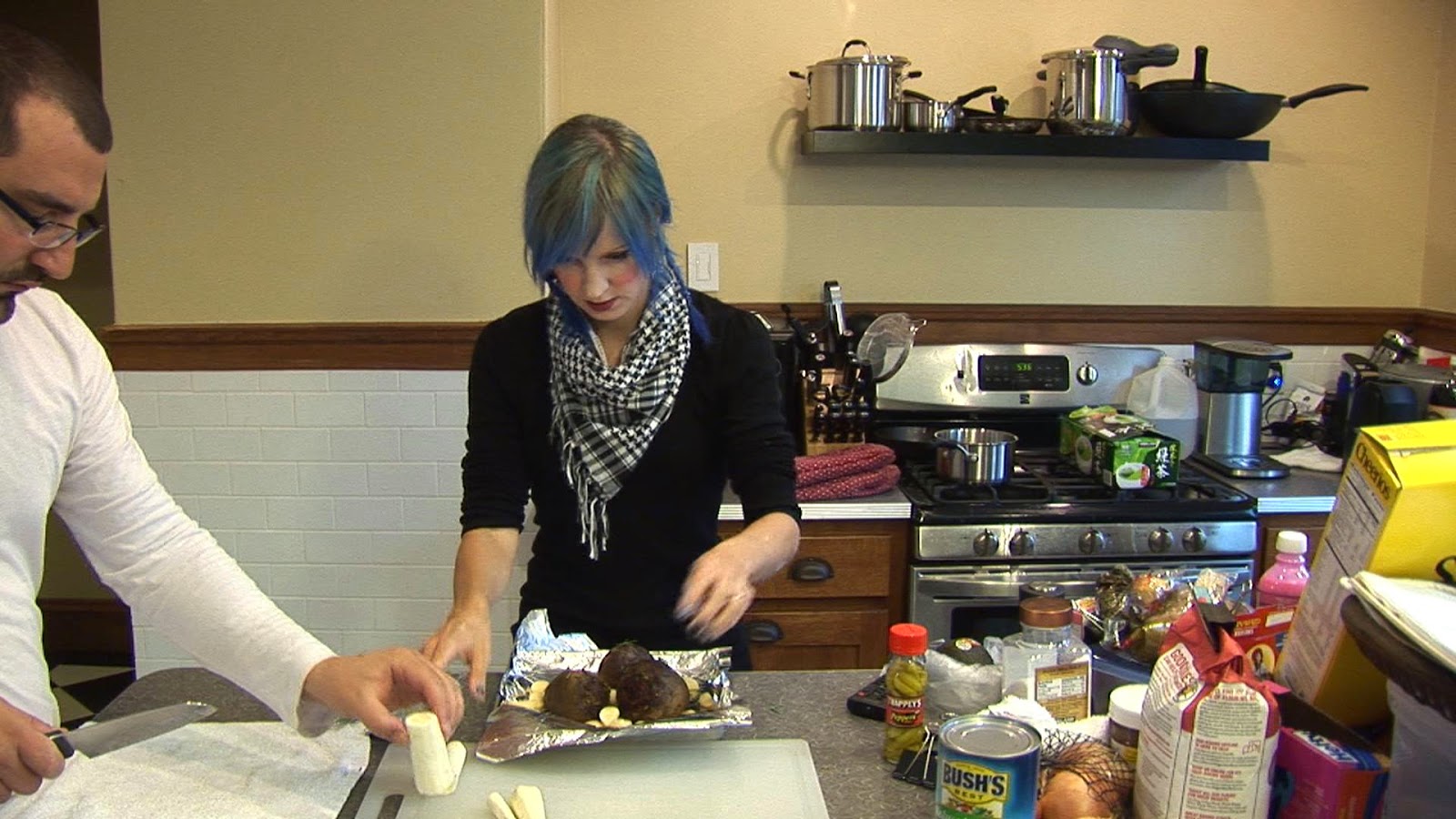 This time around, I added parsnips - which turned out to be a great call!
They lent the dish a sweetness that you don't always get from beets. 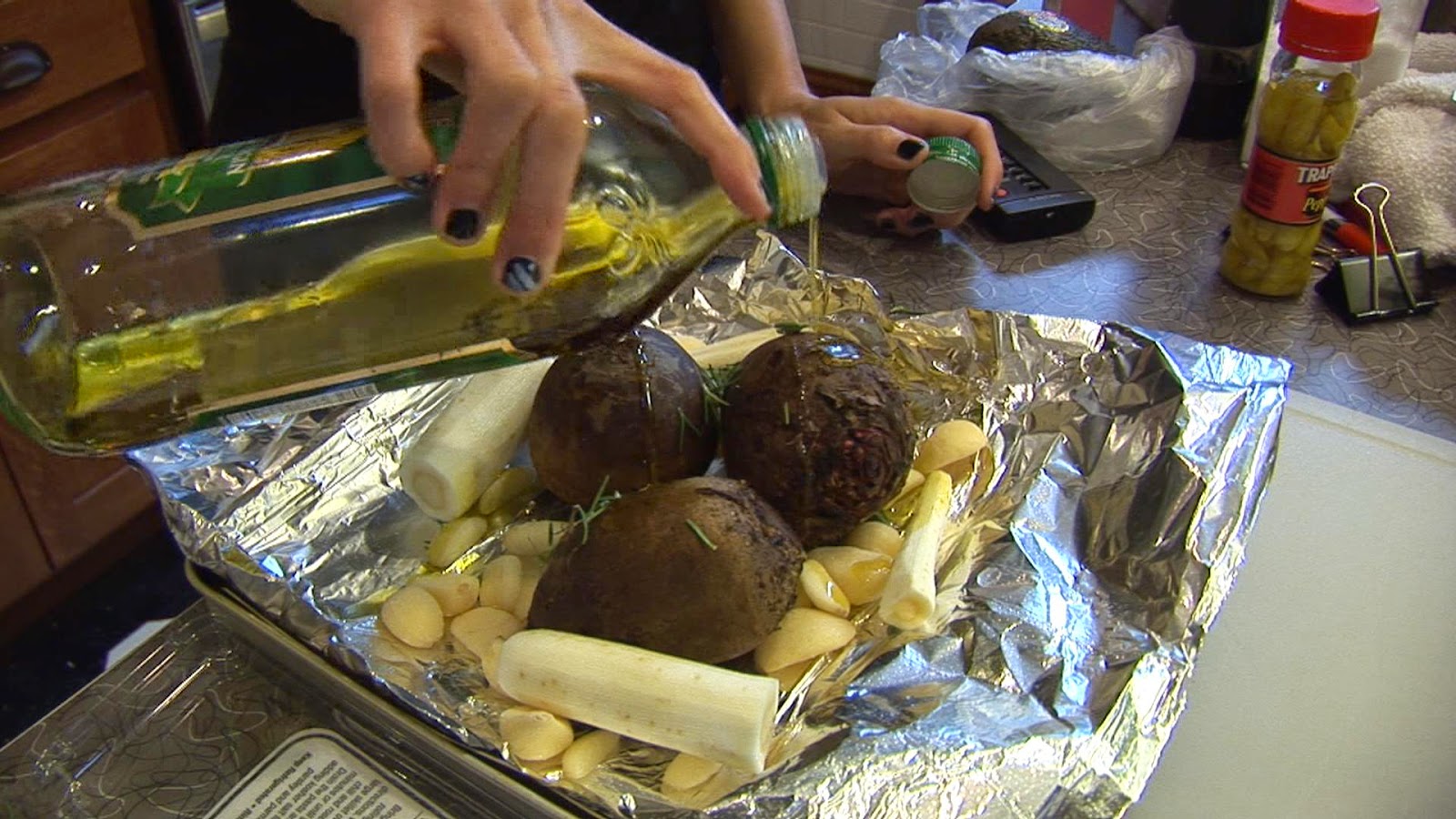 After you've placed everything on your tray, drizzle on some olive oil. 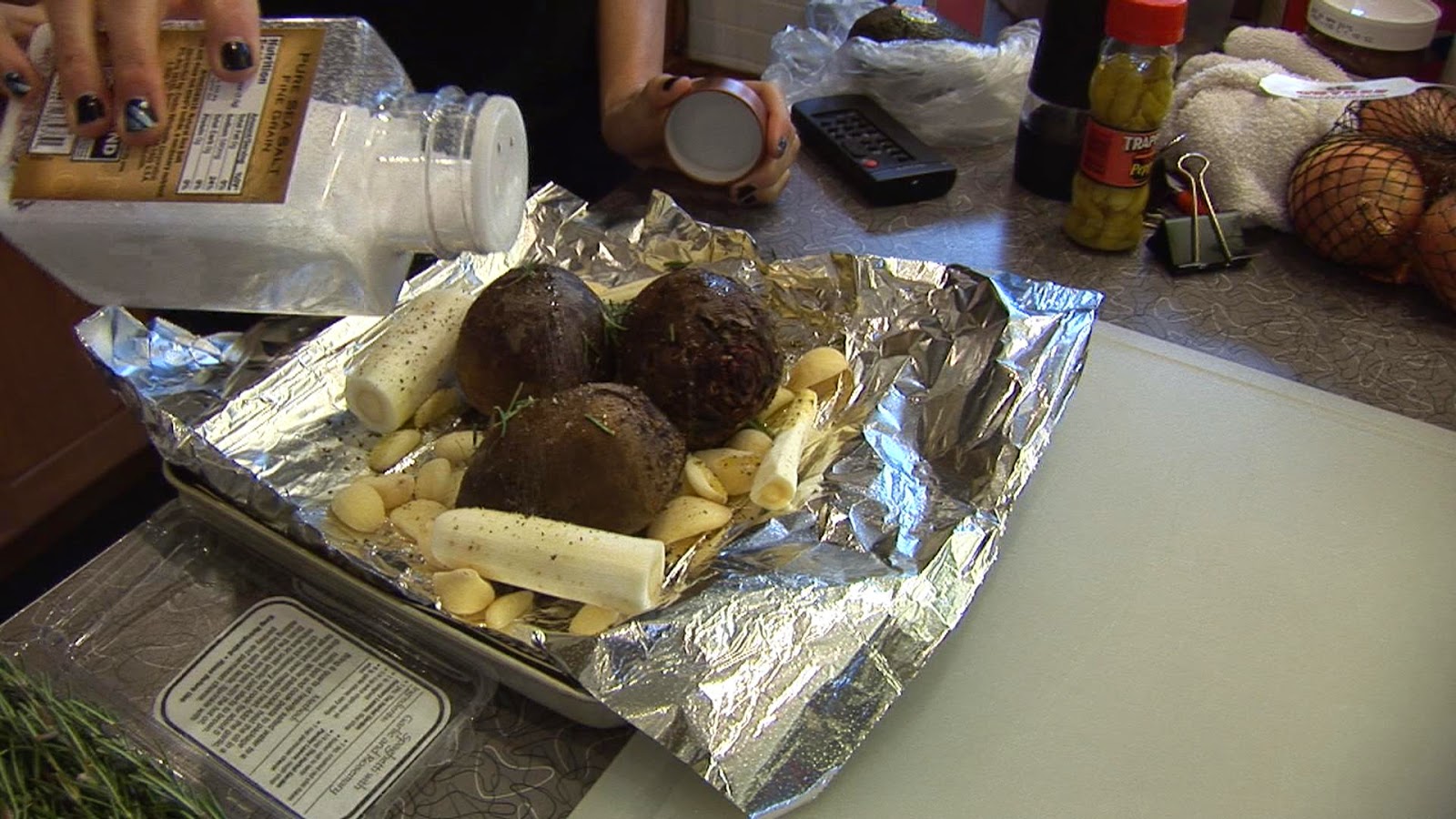 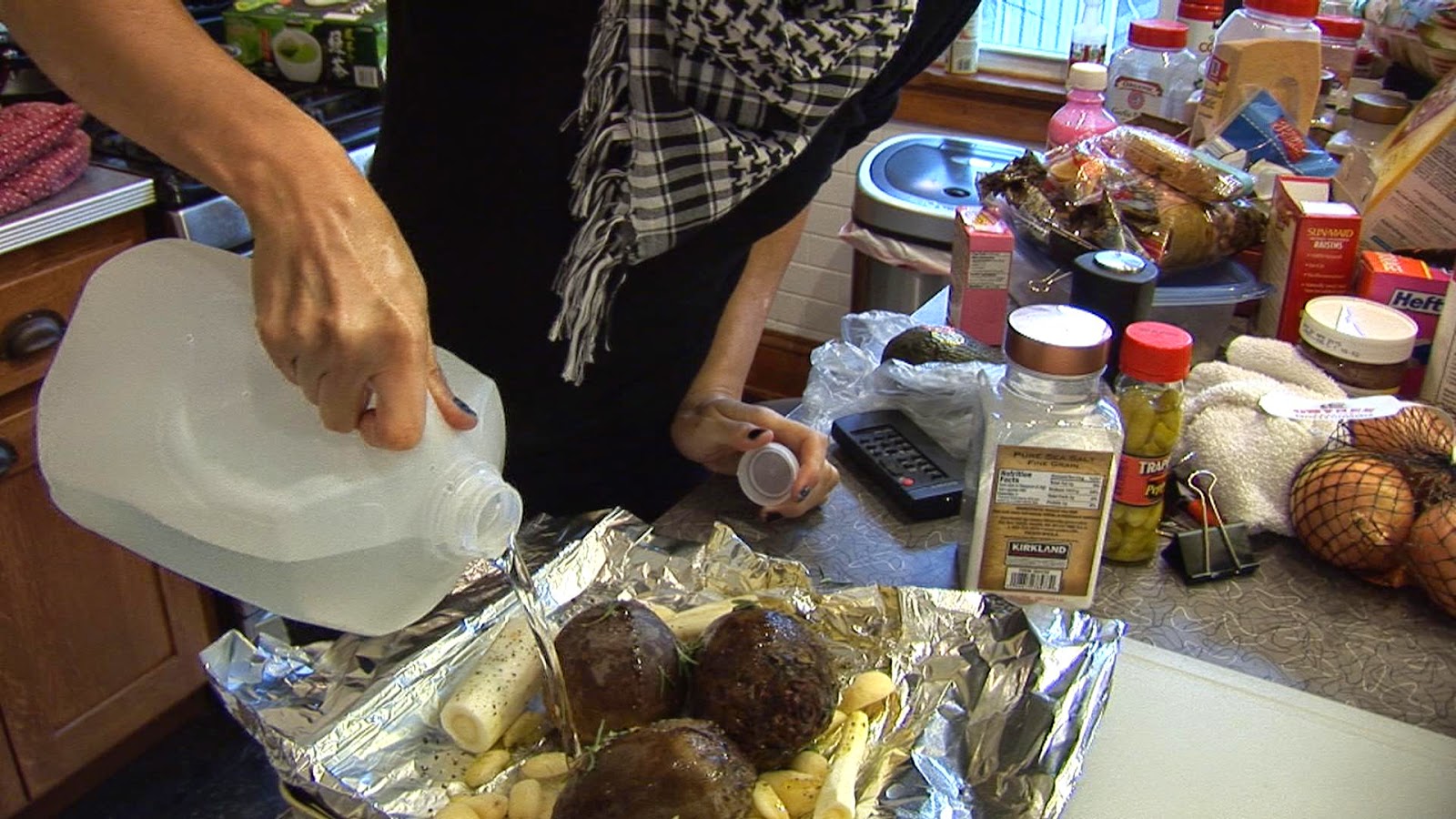 Finally, pour on some water. 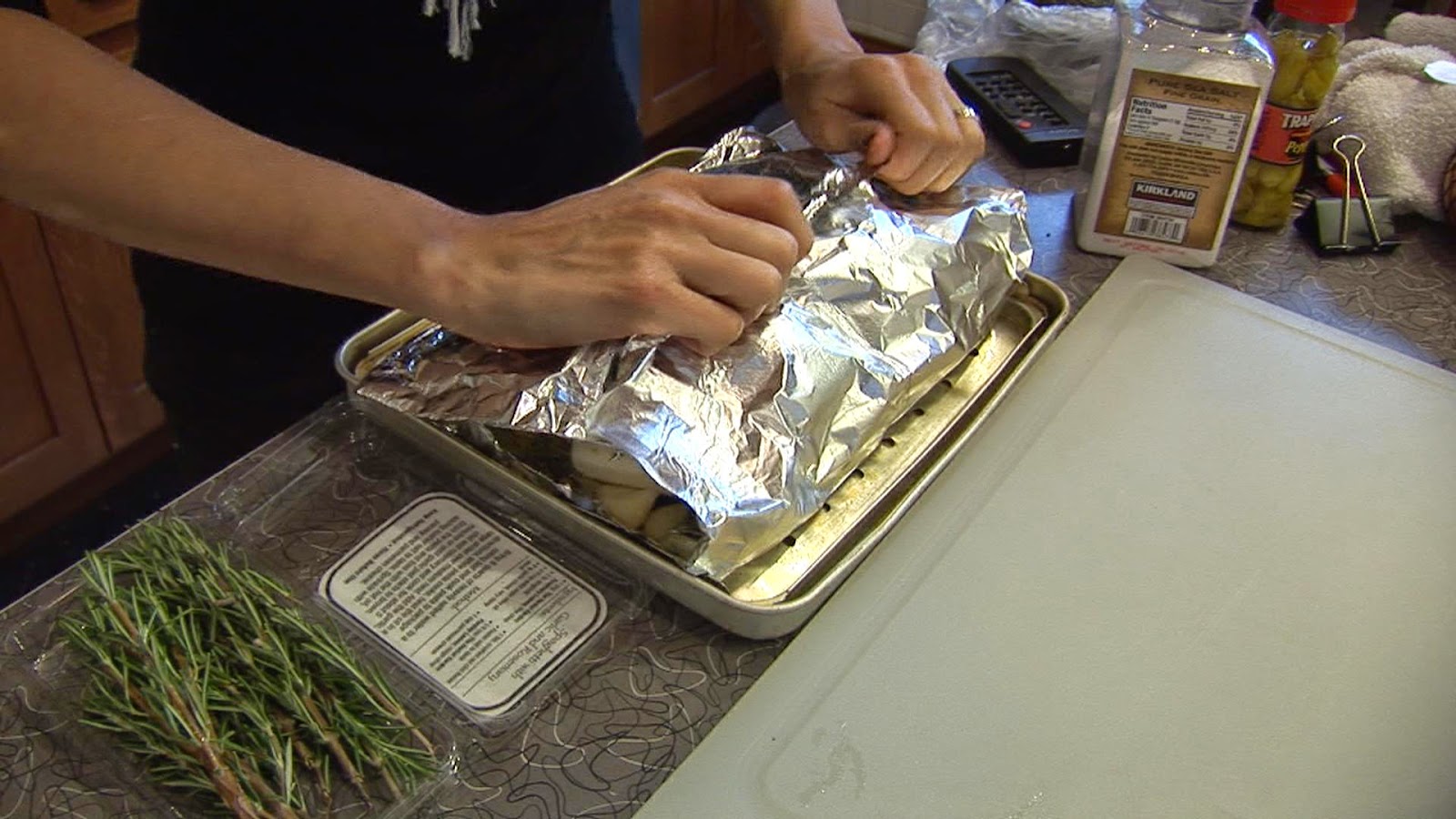 And close your foil, leaving it a little bit tented. 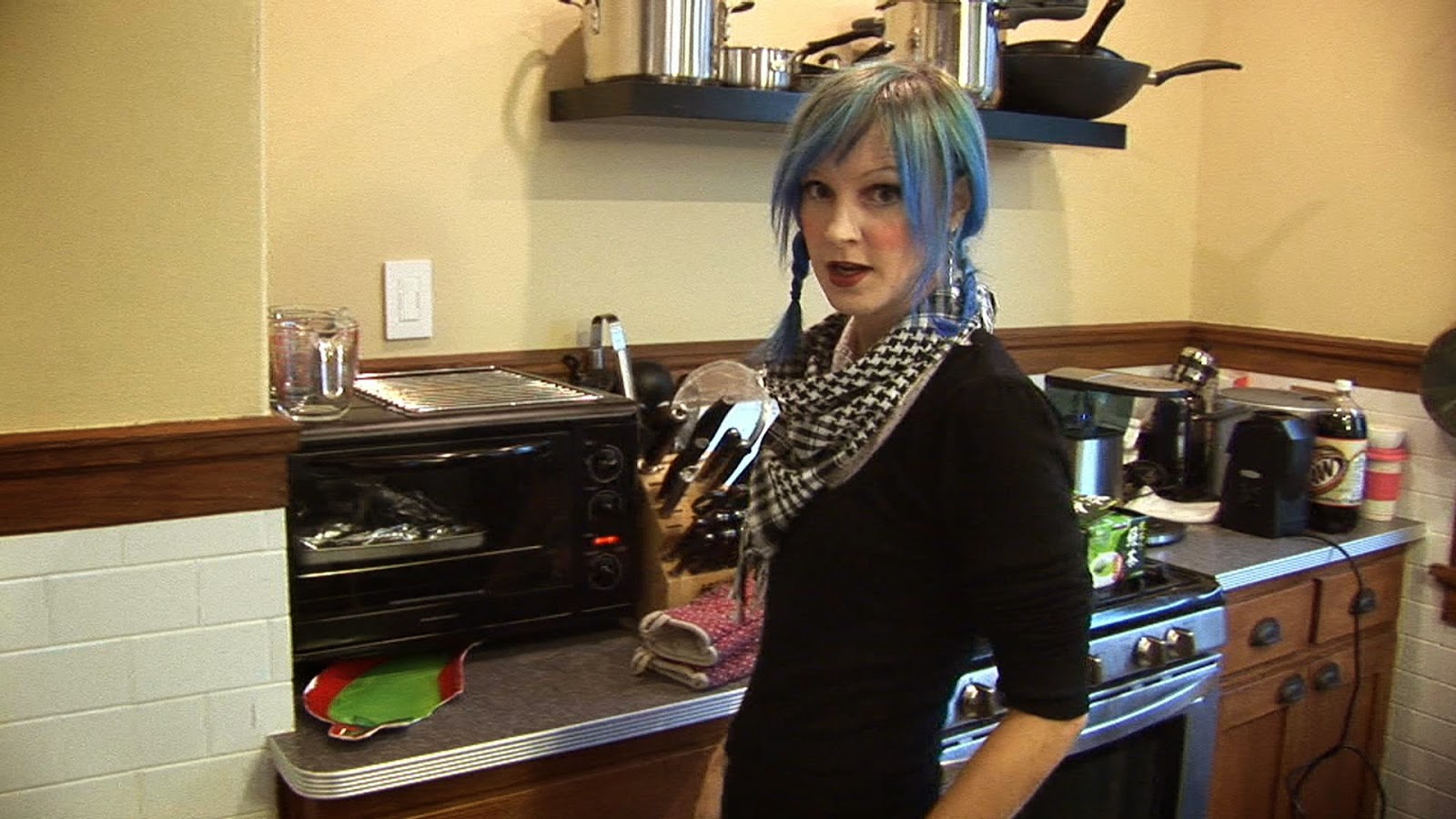 Now put it in your 425 preheated oven for about an hour.
Check the beets after 40 minutes or so and take them out when they are semi-soft
(aka a fork can easily puncture them). 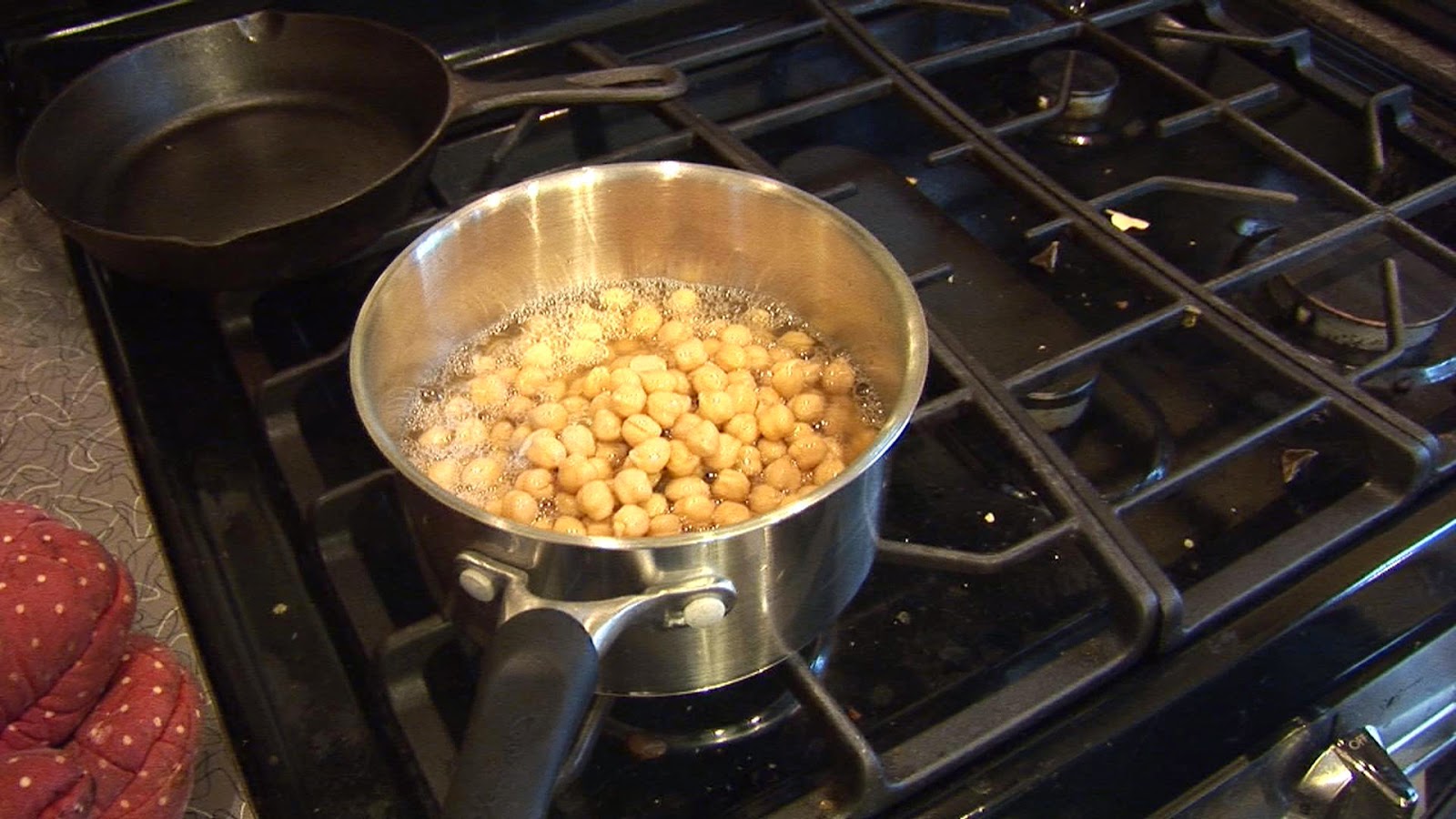 While you're waiting, it's time to cook your chickpeas!
This time around I used two cans of low-sodium chickpeas and half a chicken bouillon cube.

Take a moment to play with your dog. 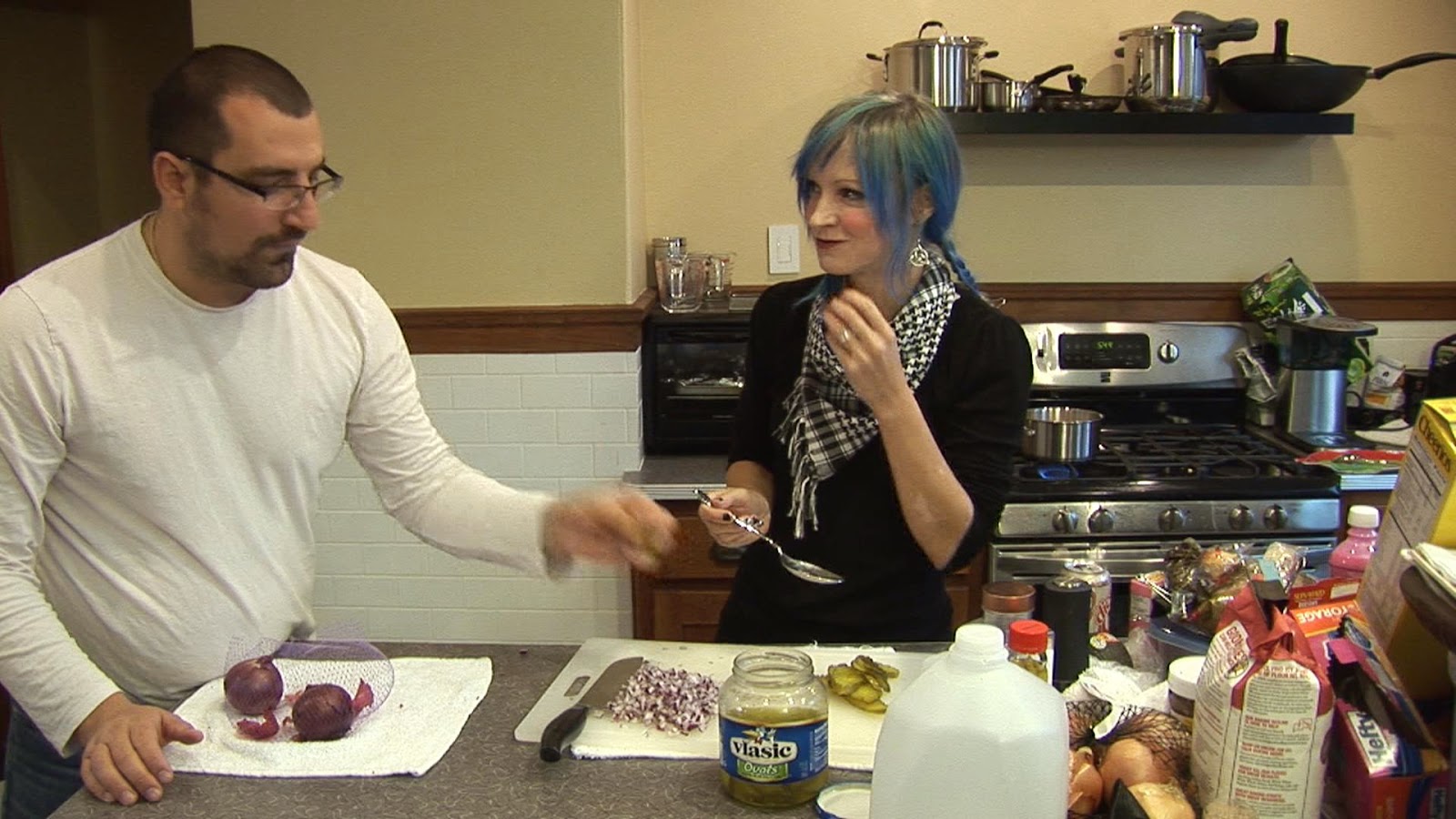 While your beets et al cook, chop up a medium sized red onion... 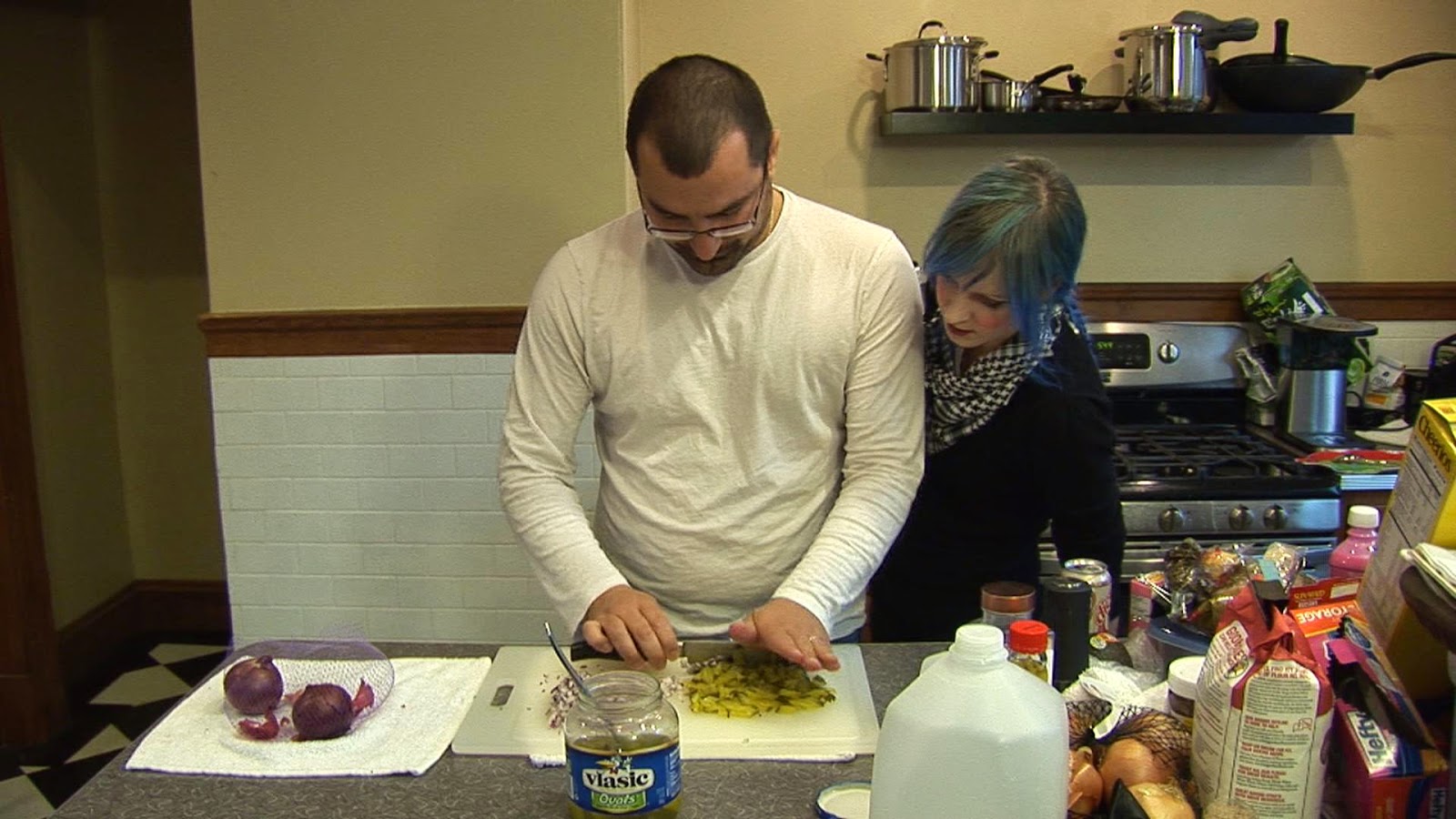 And a fair amount of dill pickles!
(What?! I know right?) 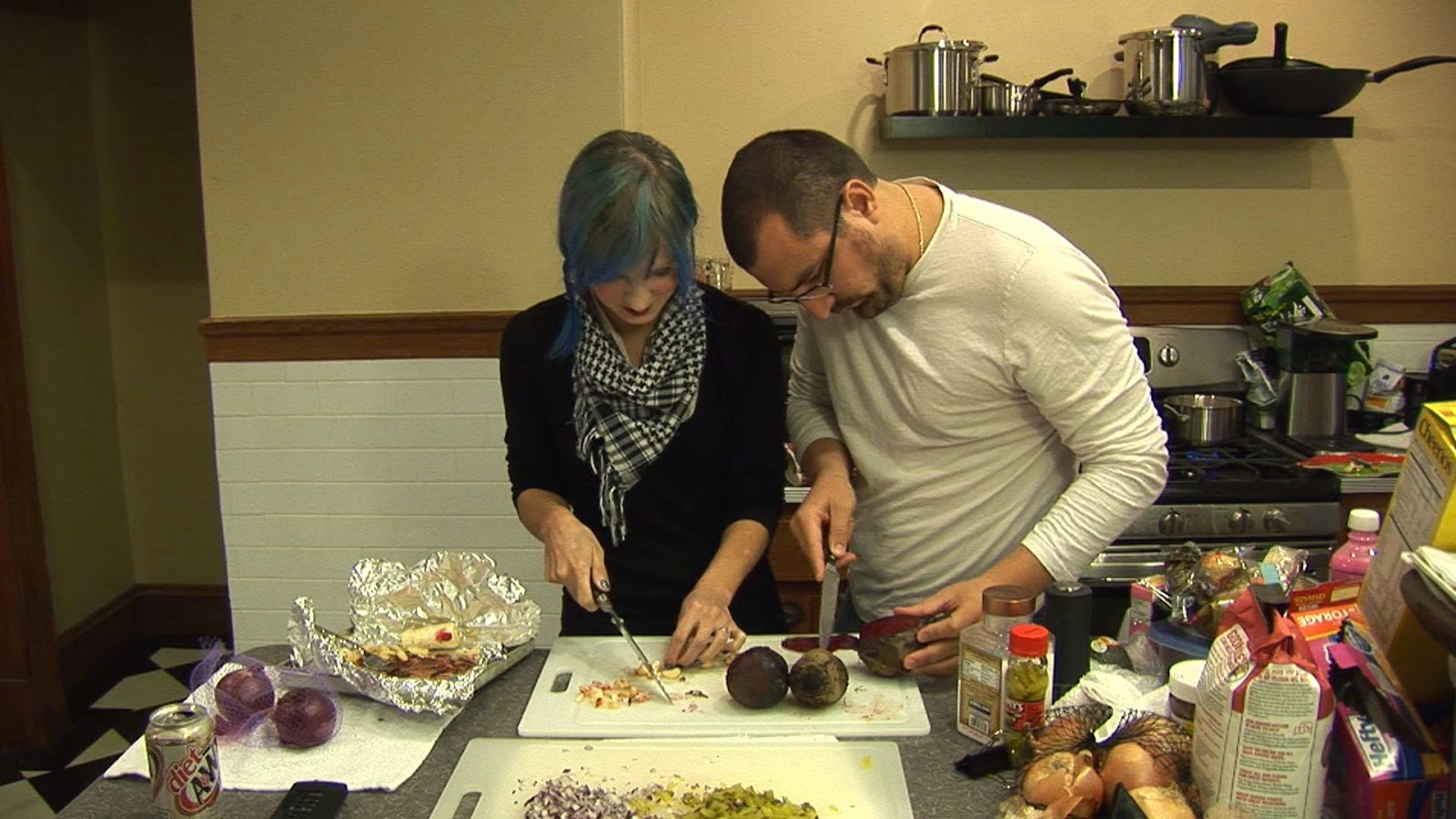 When your stuff is done roasting, mince your garlic, and peel your beets. 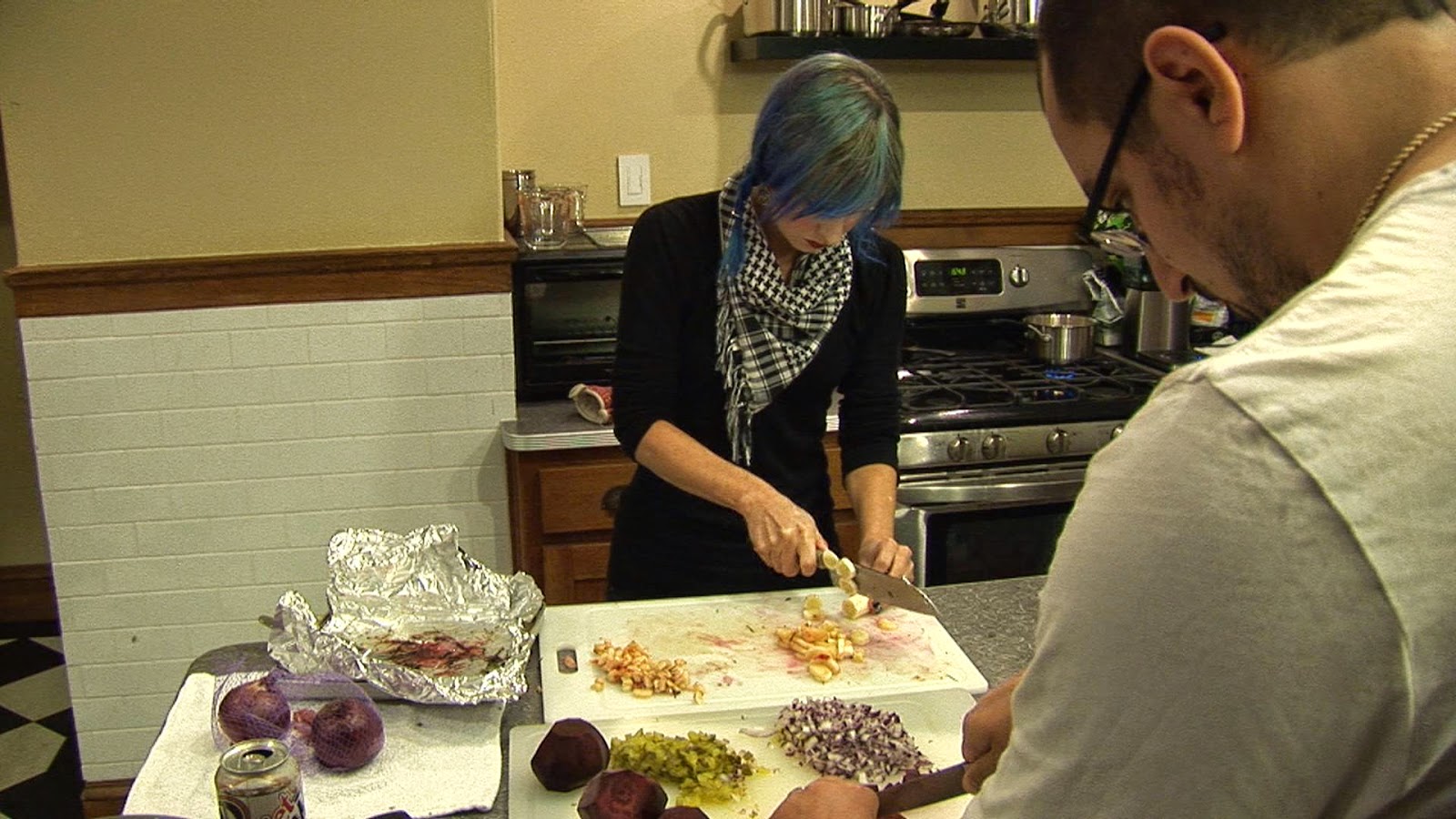 Chop your beets and parsnips as well. 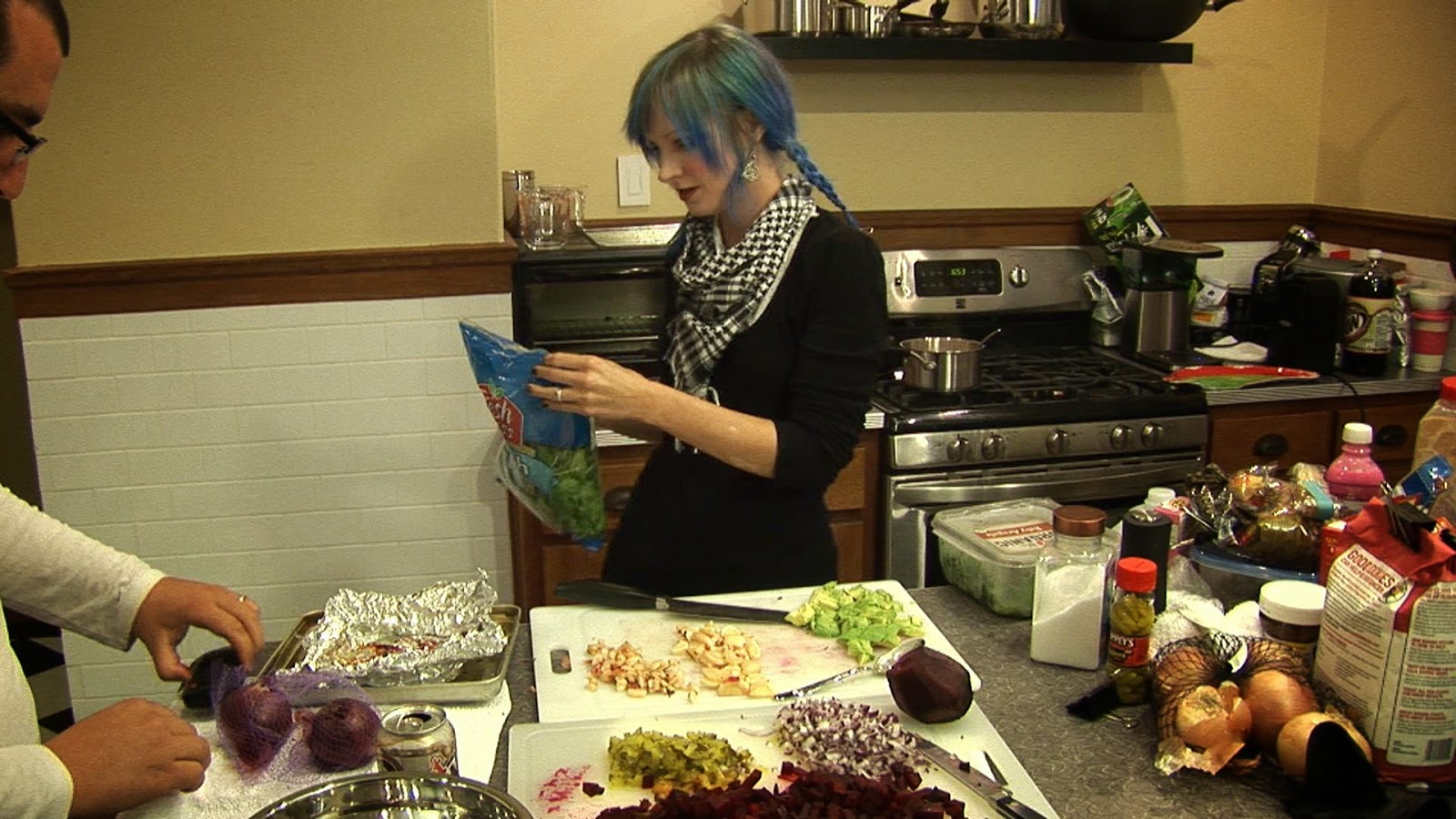 Now it's time to make it a salad!
I used spinach and arugula.
I adore arugula and think it'd be hard to use too much! 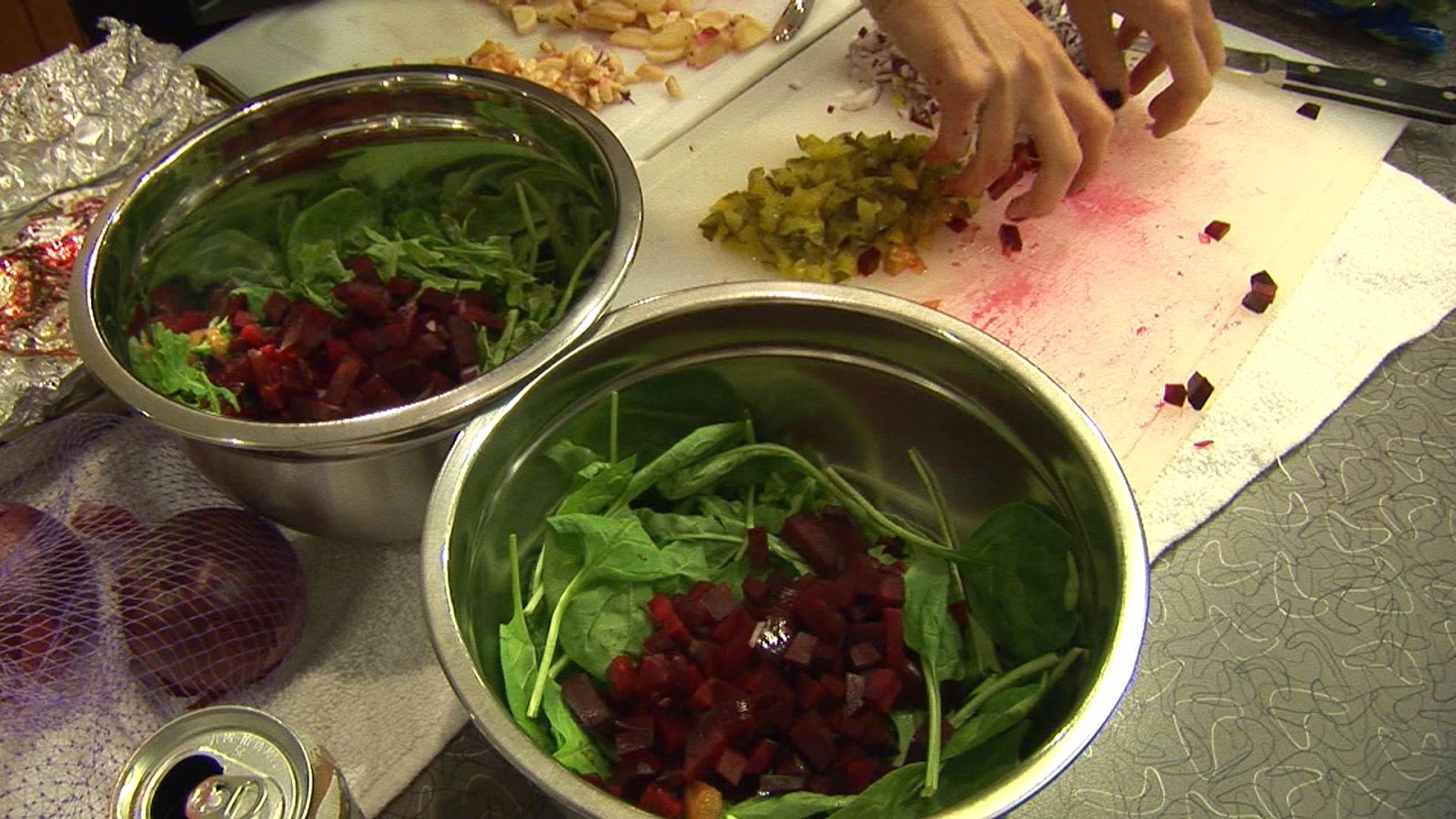 Now just layer in your ingredients.
Obviously the beets are the star of the show... 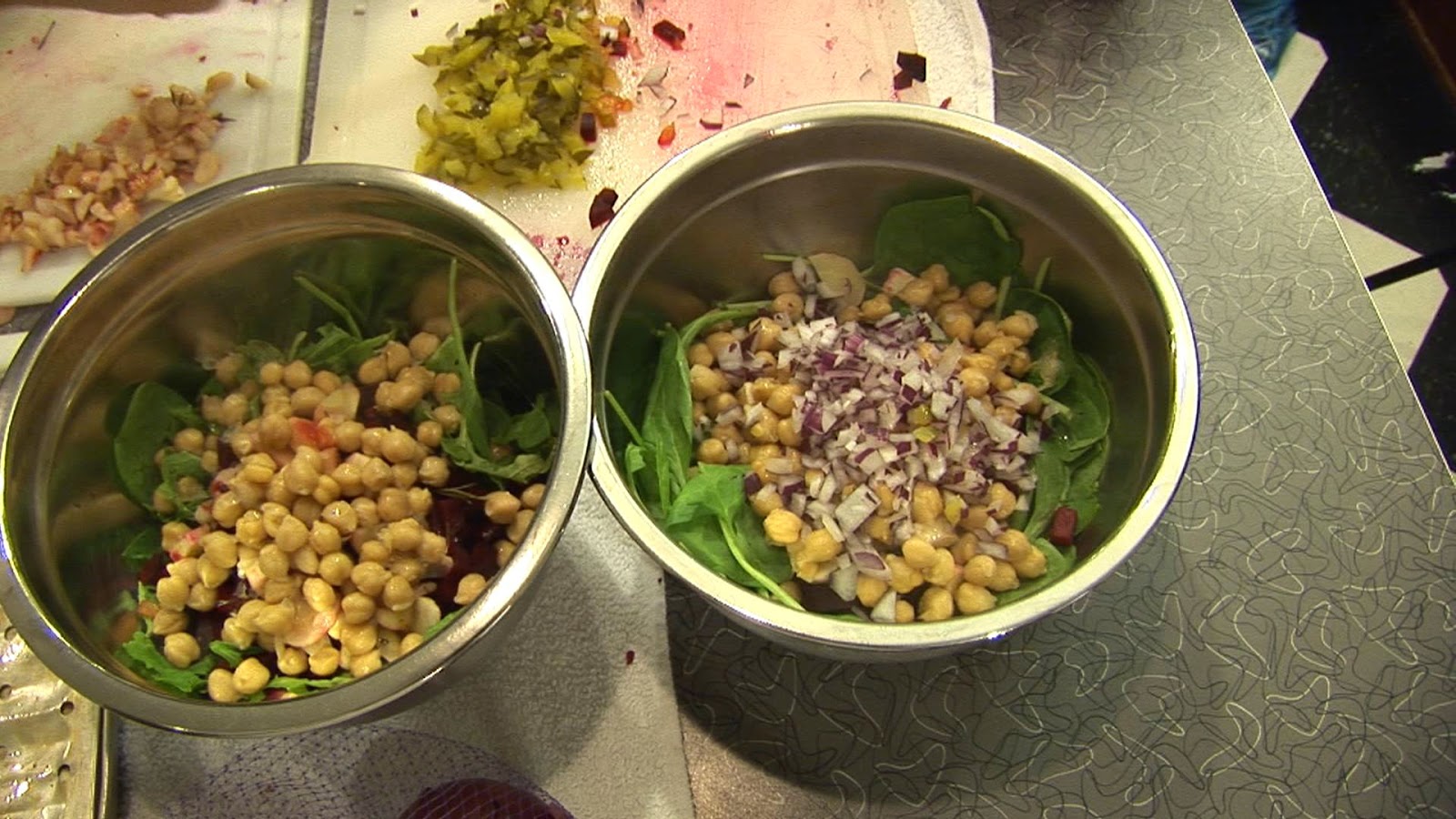 But the ensemble cast is what makes the show shine! 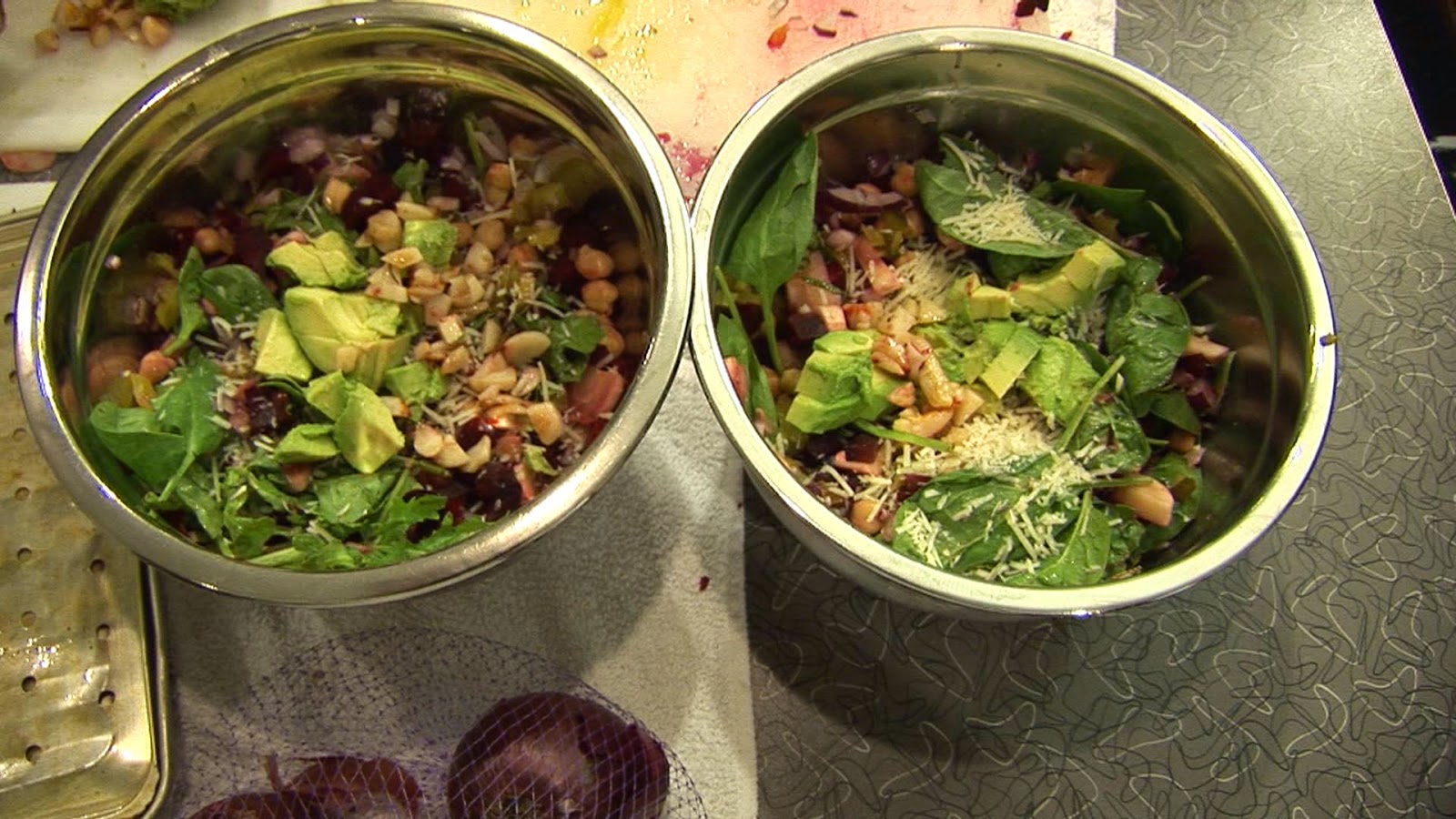 To this I also added half an avocado per bowl, and some Parmesan cheese as well! 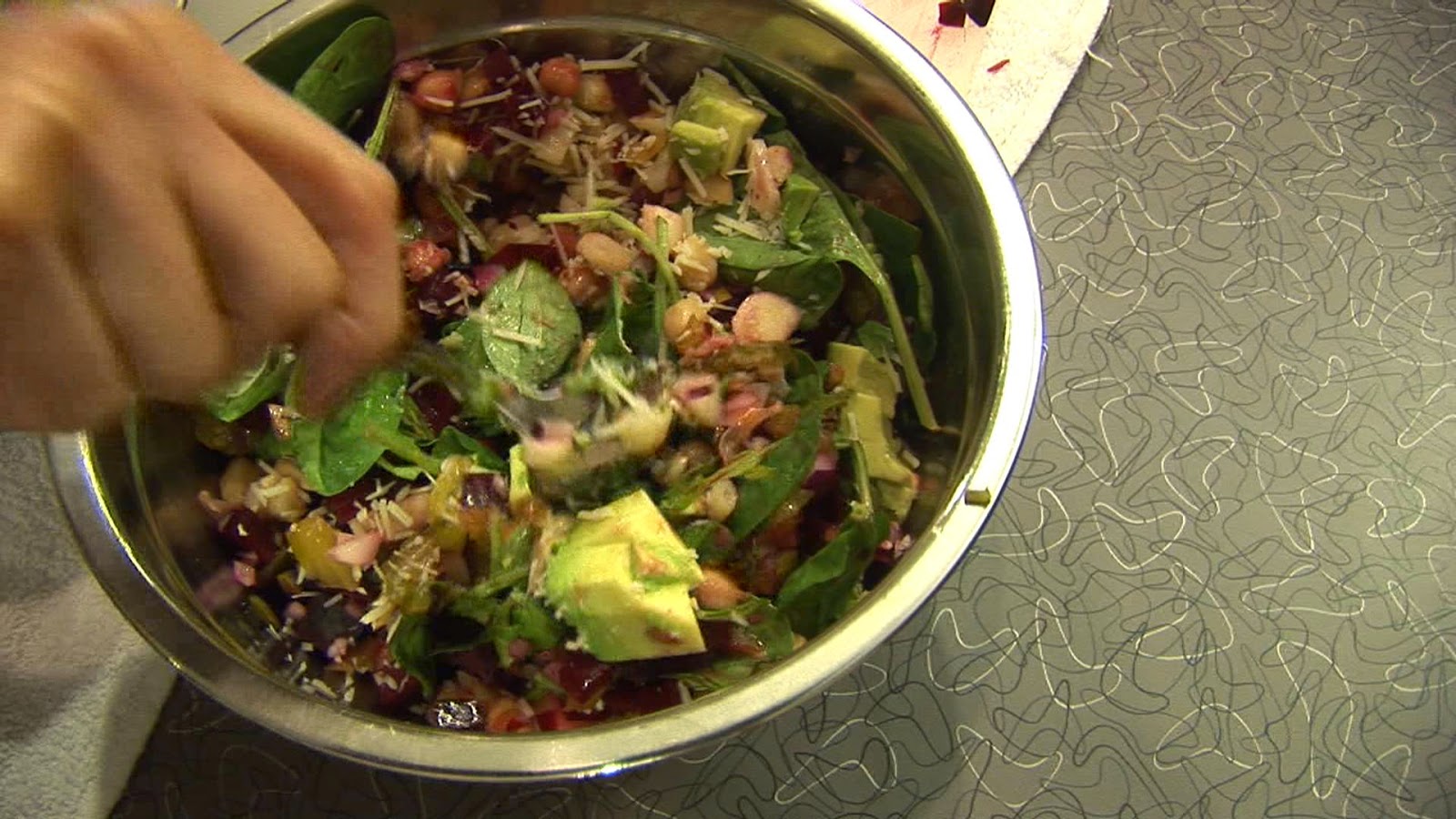 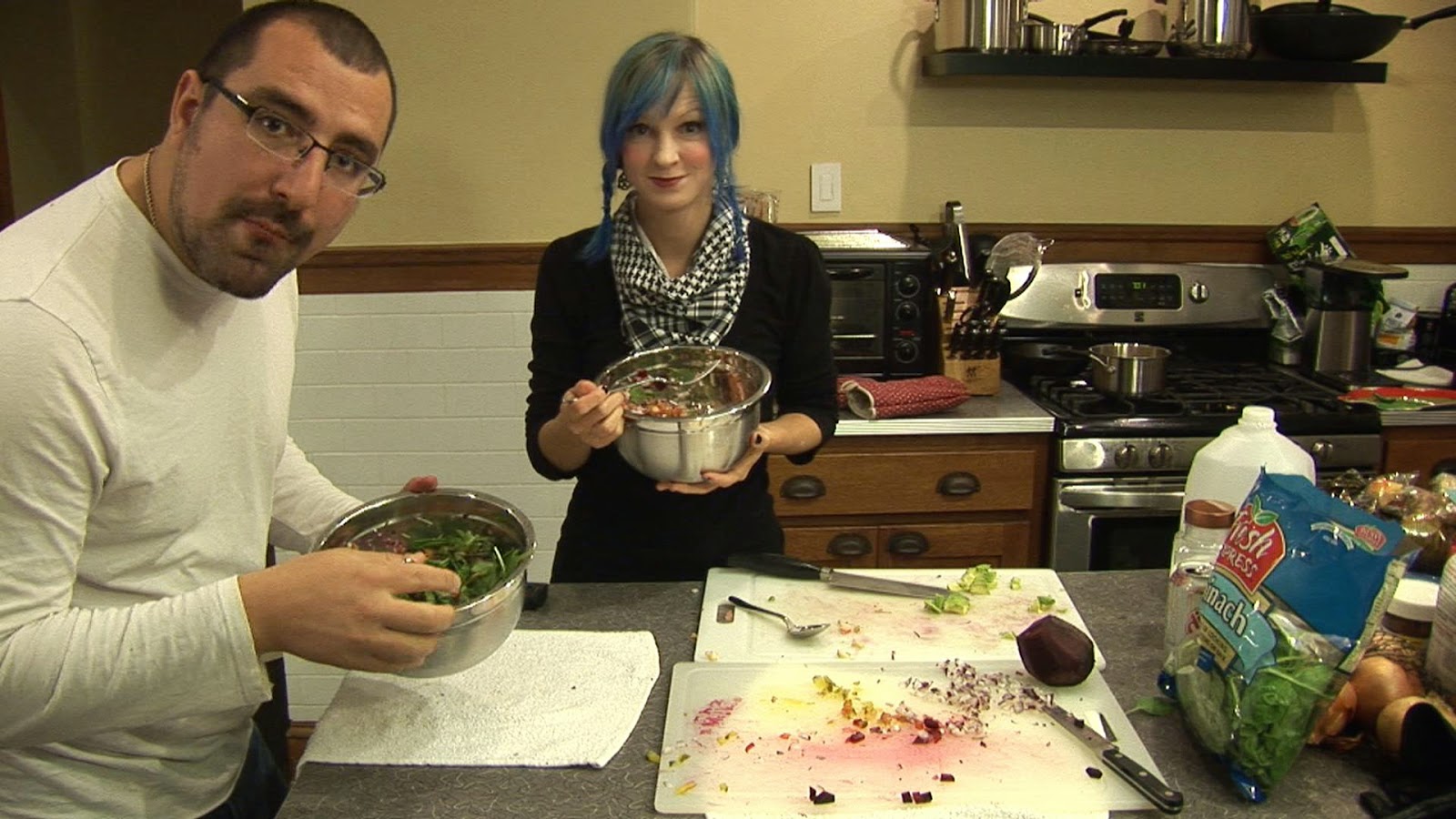 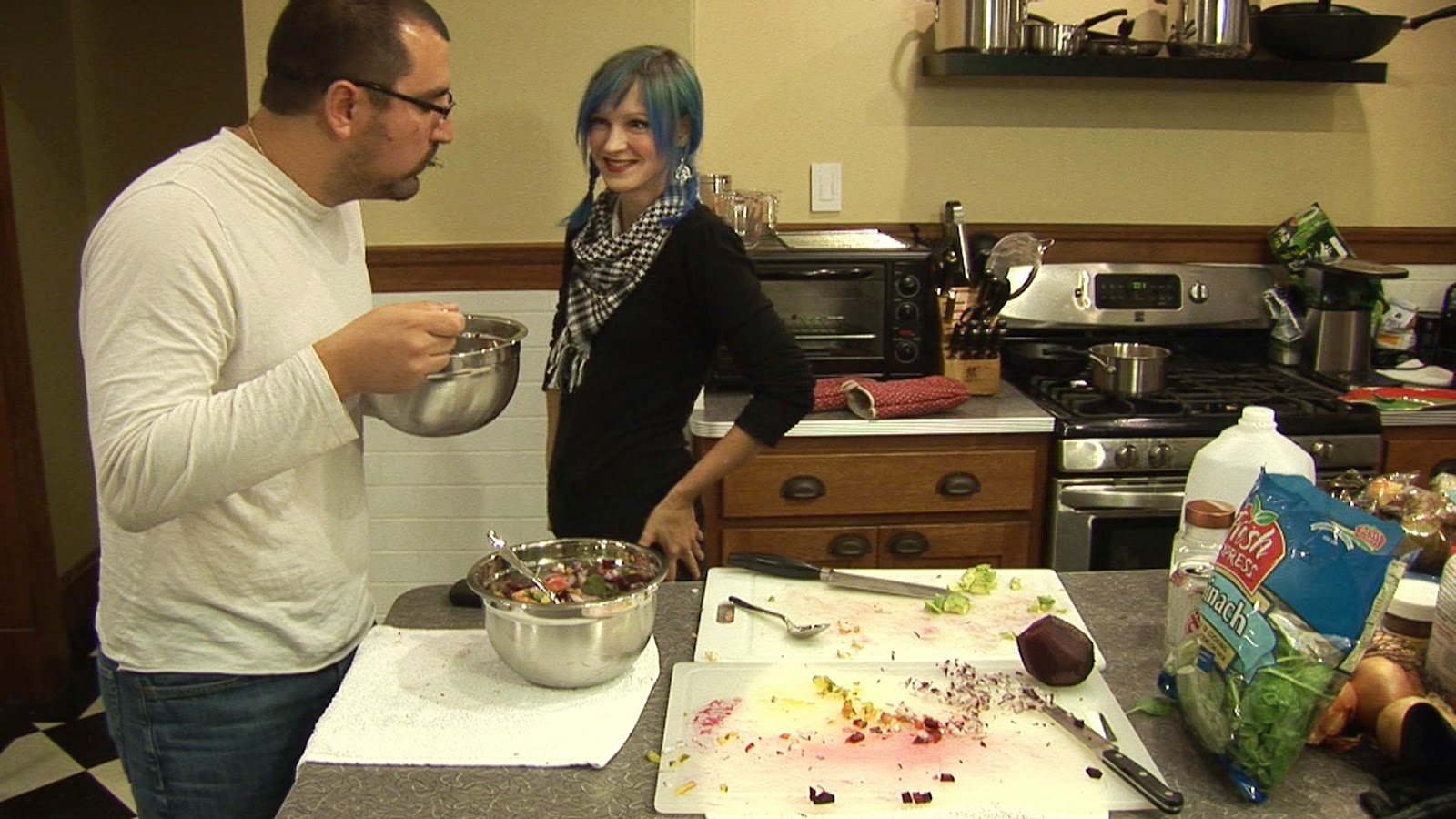 That made me happy!

It may sound somewhat time consuming, but it's worth it!
And the leftovers are fantastic! 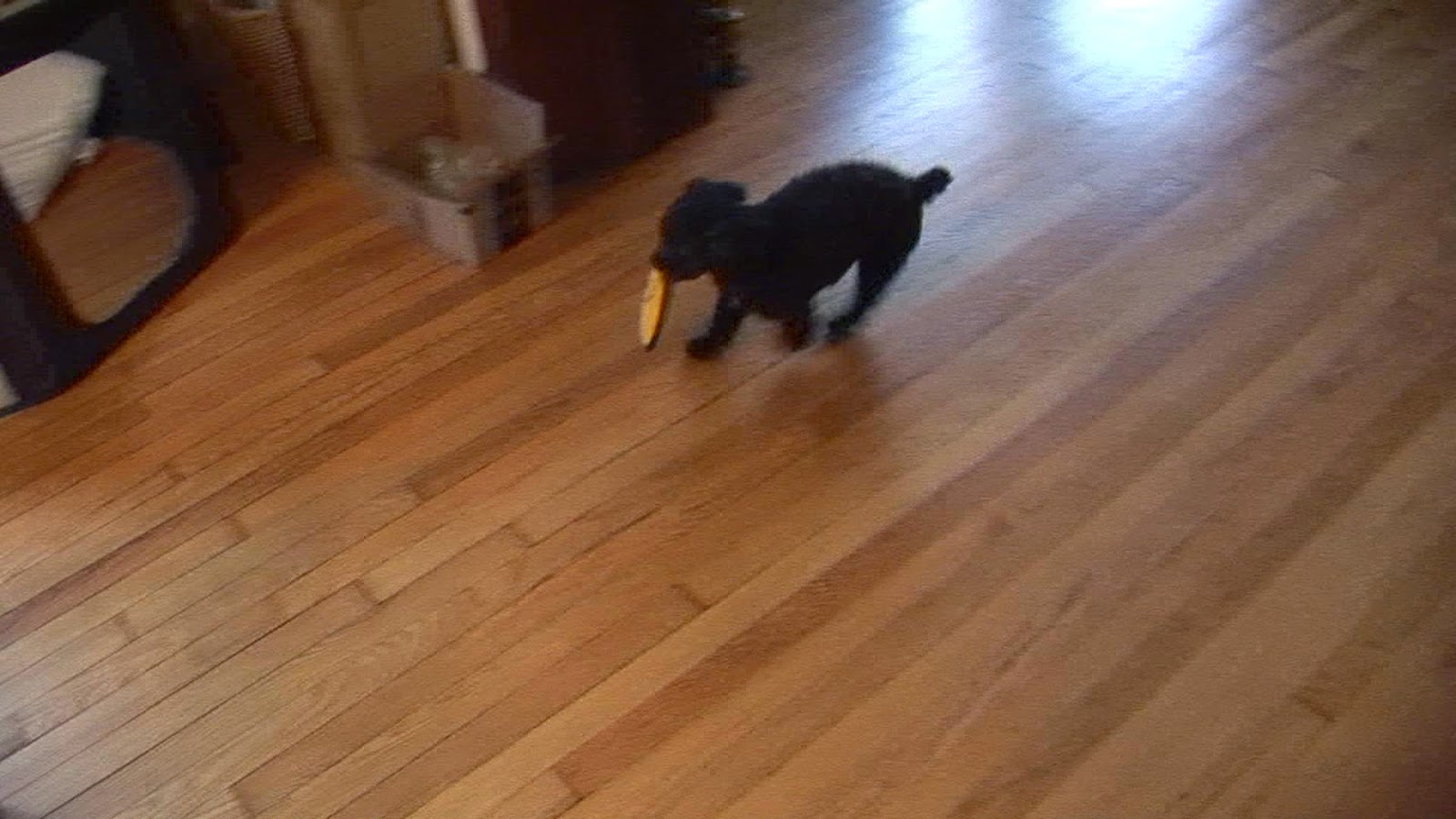 Don't forget to play with your dog some more.
This is Brigly's happy run. 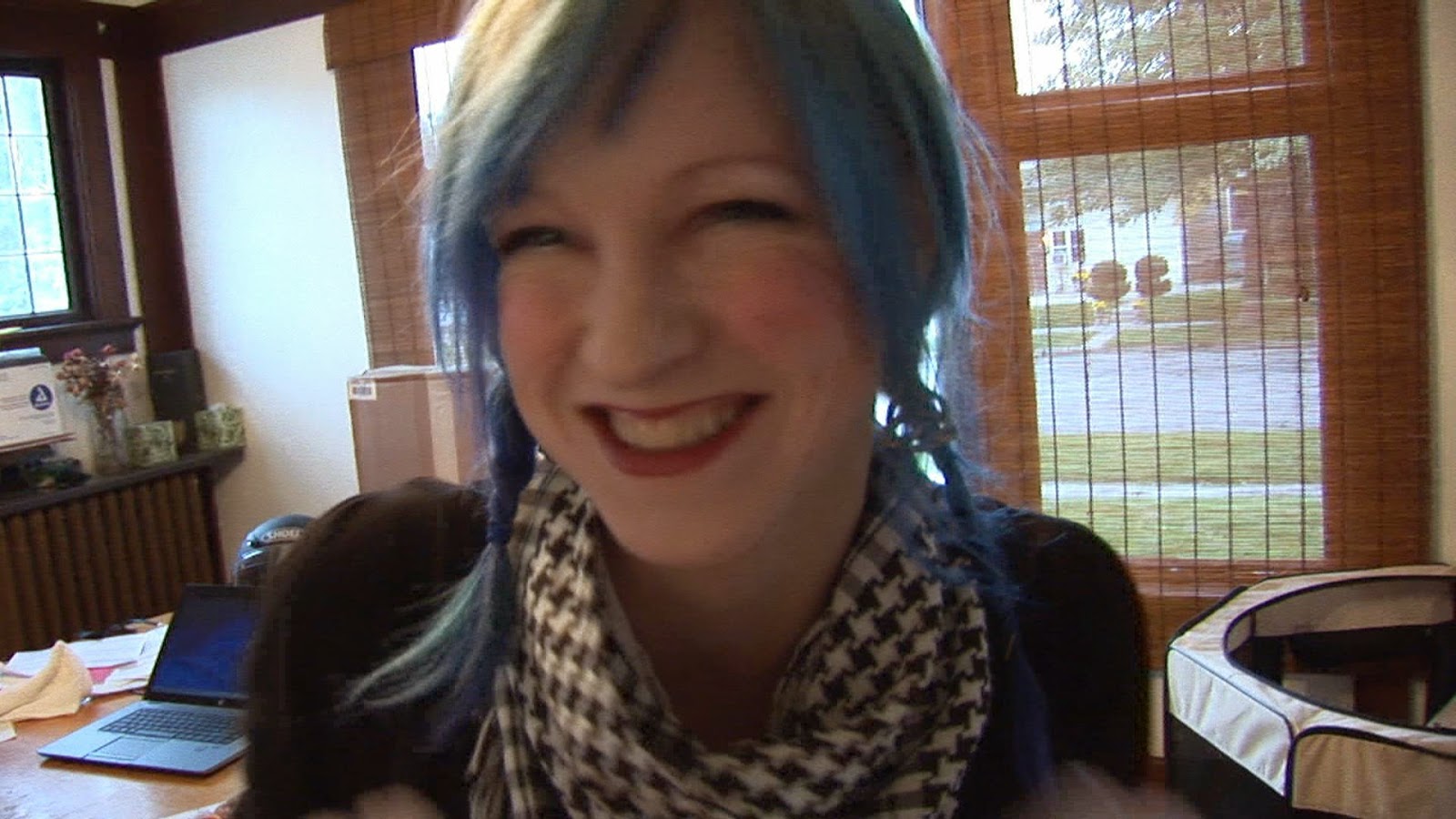 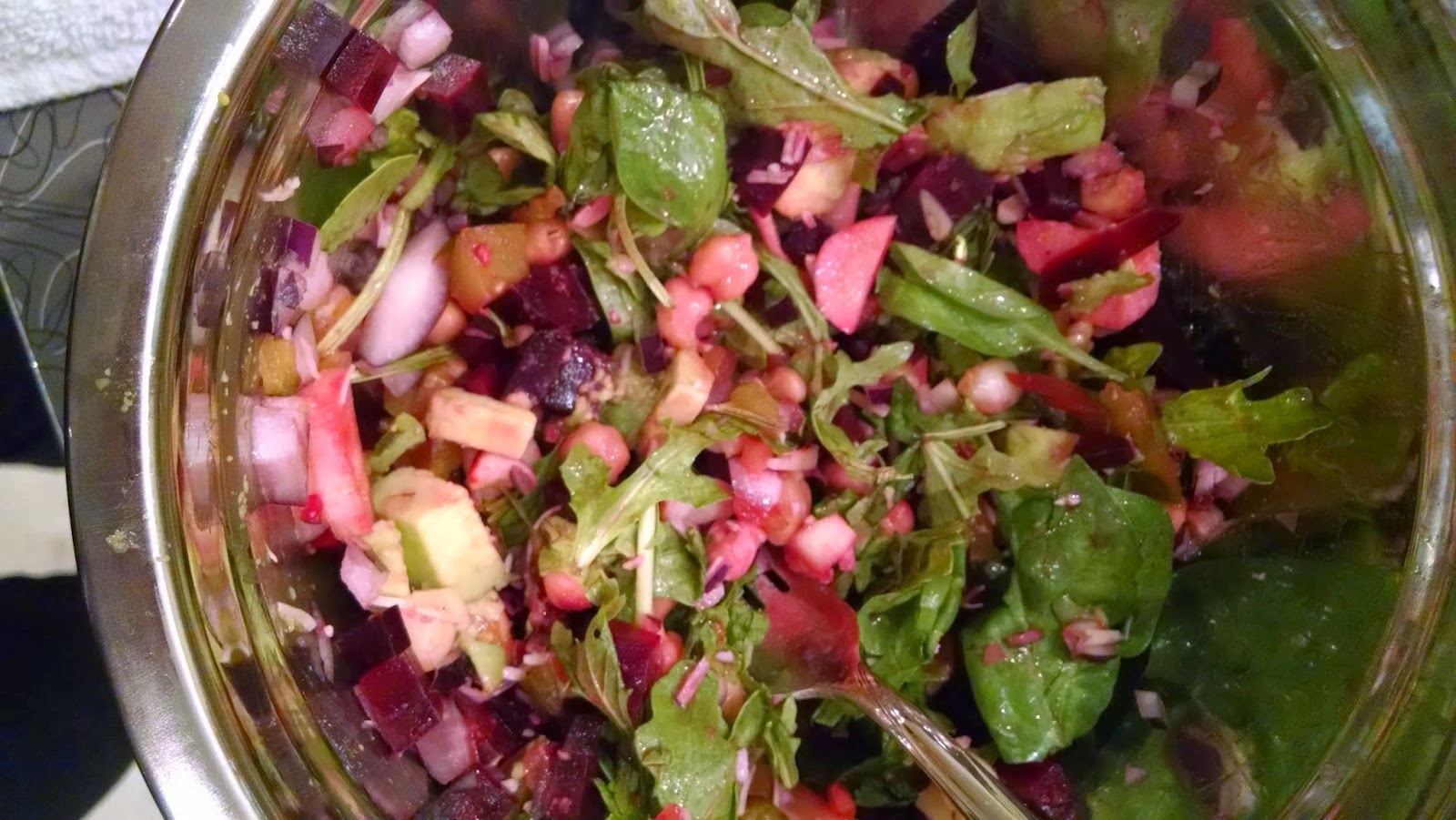 One more shot of our finished salad to encourage you to make this, and enjoy!

Recipe
-Preheat oven to 425
- rinse 2-3 beet heads
- grate skin off of 2 parsnips
- place these on a foil-lined baking tray with lots of rosemary and garlic
- drizzle with oil, sprinkle with salt and pepper, and pour in a bit of water
- close foil, leaving it a bit tented
- bake at 425 for ~1 hour or until beets are soft.

- After an hour, remove your beets et al from the toaster and chop everything, mincing the garlic as well.

- Fill your bowl with spinach (if desired) and arugula (b/c it's the bomb!)
- Layer in all other ingredients.

Hi, and welcome to KumoCafe's cooking with us!

I got the idea from a place that we ate at in De Pere, Wisconsin, but also, and this is for real, I'm honest - a Guy Fieri recipe...

It actually turned out really good, which was surprising to me.

And, it's pretty scrumptious, and tasty, and I think pretty healthy for the most part.

So we're gonna do that today and I'm changing it up just a little bit by adding... parsnips!

So, first we need to rinse off our beets.

Now I know a lot of people out there hate beets, my mom being one of those people...

Leave them in their skin, cause once you cook them you can peel off the skin, or shave it off if you want...

Ok so we're using three beets... just the heads of the beets.

We're gonna roast them at 425 for about an hour with... rosemary!

I love rosemary so I'm gonna use more than one sprig, obviously.

You're gonna close all the tin foil around this when you cook it, and you're gonna impart - I actually but the rosemary in my salad.

I didn't use parsnips last time, but parsnips is a good root vegetable so I thought I would put in a little bit of parsnip this time and see.

We also add several garlic cloves.
And I do mean several.

We'll see how the parsnips work out with this.

Now we sprinkle on some olive oil...

That's a little bit more than a sprinkle, maybe.

This time I'm gonna add a little bit more water than I did last time cause I really liked the way that all the flavoring turned out together.

Then we're gonna close this...
And then pop it into our toaster.

I got reduced sodium chickpeas, even though last time I cooked all the juice off and ended up adding chicken broth, and it actually turned out good, so I might do that again, we'll see.

He wants to play.

You might think you're done now, but you're not done.
Now comes the strange part of the other stuff you're gonna put in that doesn't need to be cooked.

'Cause it's time for Puppy-Chop!

I think people know how to do onions...

So Theron's mincing some purple onions...
And here's what's actually the strangest thing...

To go in our final product.

You don't want 'em too -
Well make 'em smaller, a little smaller than that. You know?

It's been an hour, so we're gonna take this out.

I also added less than half of a chicken bouillon cube to our chick peas because they're pretty good with just a little bit of added salt and flavor.

So while I'm waiting for them to cool I'm gonna mince my garlic.

I'm not even gonna mince it that much because, as you um probably know, once you cook garlic it's not as strong as like, raw garlic which is crazy strong.

The fun part about this is that since we're eating lots of garlic and beans, we'll be farting on each other all night.

Now for what makes this actually more of a salad...
We're gonna put some spinach and arugula.

Gonna put a little bit of spinach on the bottom.

Is that good?
A bit more?

'Cause beets are the main thing about this whole thing.

I'm gonna put some rosemary, do you want any rosemary?
Sure.

'Cause rosemary is awesome!

Which is what's gonna make all this... make our salad kind of wilt down a little bit.

I like to use the juice in mine 'cause it makes it like a salad dressing, kind of.

Your onion will get pushed to the sides of your bowl, so you'll have to be careful when you're eating it to make sure that you have... everything you want!

Don't worry, it actually is delicious.

I know you know because you've had this before.

I'm gonna put a little of the chickpea sauce on mine.
Ok.

Avocado.
'Cause everything's better with avocado.

Try and get a little bit of everything, right?

Why not a lot of everything?

Huh?
Try and get a lot of everything.

We may need a big spoon.

Yeah, it doesn't need anything.

It's really good.
Make it.

Thank you for joining us on this episode of cooking with us!  And we'll see you next time.

Go get your fishy!

He did his little!!