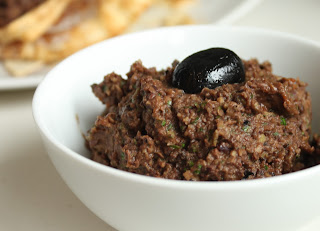 I had started the day off feeling fancy, (because, coughs, I put my hair back and up) and wanted to make something equally 'fancy' and somewhat ambitious. After running several errands, not the least of which involved trying to wrangle my dog en route to the vet, that ambition had waned. Still, I approached the grocery store with some amount of hope.

If you ever had the chance to go to a little bar called Park Blue just off Central Park in NYC before it closed, you might have been lucky enough to try their amazing chocolate martinis, wines sold solely by the half bottle, and yes - olive tapenade, you would understand that, when I went down the aisle that sold cornichons (or gerkins, or 'baby pickles'), I was entranced by the can of chopped black olives on the shelf nearby.

I knew my mission, and I chose to accept it!

Of course I had no idea what actually went into making tapenade, so I hurried to the front of the store to get some reception on my cell, and googled the simplest recipe I could find. As my husband hates anchovies, and I am, myself, not a huge fan, I decided to ixnay the 'nchovie-ay (eh?) and just get the basics. Basically, it turned out awesome.

First, I chose 'chopped black olives', which to my surprise when I got home, were actually more minced than chopped - yay!  I then snagged a can of capers, and was all set. Yep! Pretty simple. 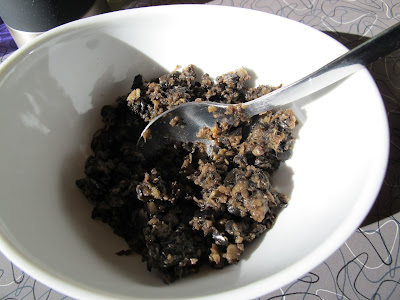 The pre-minced olives meant I had even less work to do - yay!
And yes, I do prefer black olives to green, but choose whichever olives you'd like.
This was a small can of olives, but I didn't look at the exact size. Sorry! 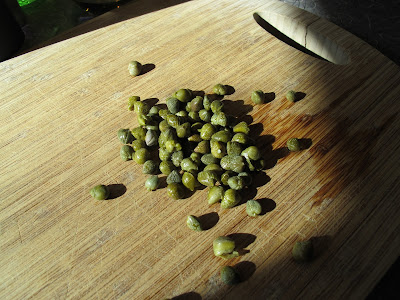 Next up, I got about 3 tablespoons of capers, rinsed them, and prepared to chop! 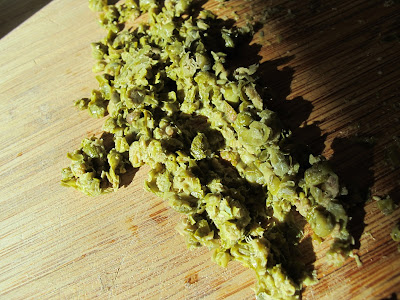 I thought they'd be all roly poly on me,
but they were delightfully simple to chop thanks to their mushiness! 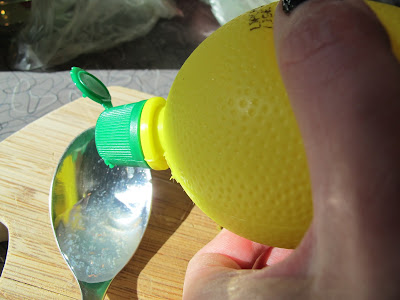 Then, in went 1 tablespoon of lemon juice. (I don't have real lemons, ok?) 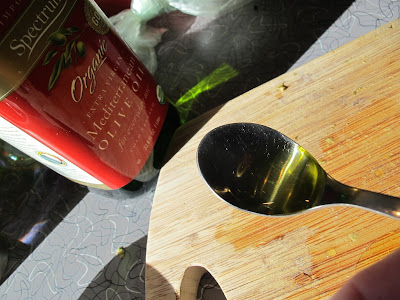 And 2 tablespoons of olive oil.

Since I wasn't using anchovies or anchovy paste, this is where the recipe could have easily ended.  If it had, it wouldn't have been bad at all, but as I like complexity, I ventured forth on my phone to find alternate ideas (with things we had around the casa.) 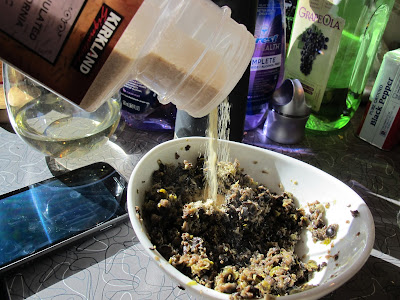 Another recipe called for a clove of garlic. A while back we had a bag of
garlic cloves in the fridge - but as I soon found out, it was gone!

Instead, I added in a fair amount of garlic powder, which worked out fine, only to find later in the night, several heads of garlic were hiding behind the plastic wrap.  Time to clean much? 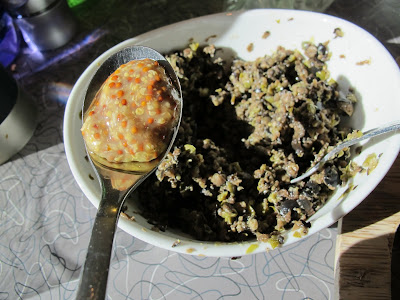 Yet another recipe called for a teaspoon of whole grain mustard.
We are in love with this stuff - so heck yeah - in you go! 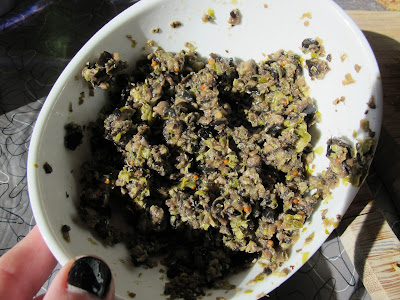 When all was said and done, this is what my mixture looked like.
And as I've said before, it tasted super awesome. 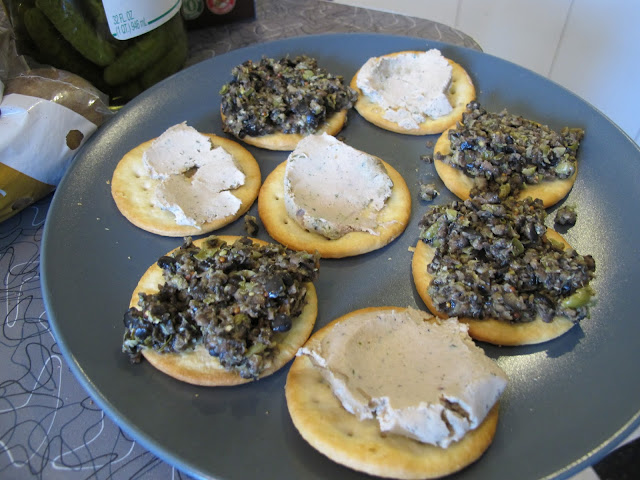 I was naughty and bought Breton "cabaret" 'crisp and buttery' crackers to pile the tapenade onto.
I was super naughty and also bought foie gras to act as a creamy counterpoint to my tart tapenade.

End result?  Fantastique!
And yes - my husband loved it! 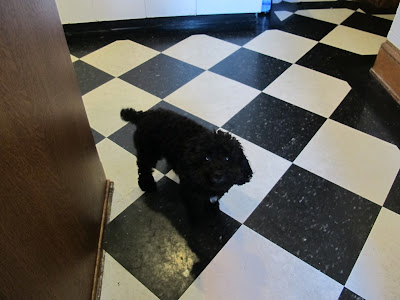 Even Brigly got in on the cracker action! :) 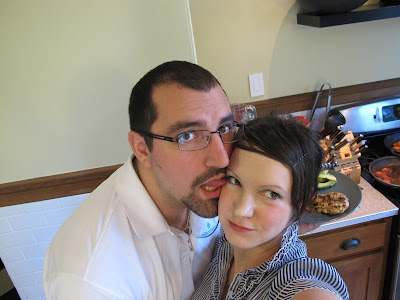 This is how you show your love?

So much for my attempts at being a housewife.

(My friend Tabby had posted advice for housewives from the 1950's on her facebook this day so I thought I'd try and accomplish some of that 'wretched drivel', as my sister denounced it, by trying to make a tasty pre-dinner snack.)

As you can see: We are not tame enough to be so rigid in our lives! Hah!

(I do highly recommend the combo of tapenade and foie gras on crackers. Délicieux!)

Though I would next time maybe put it in a processor, as I'd love to have this consistency (and less juice):
Finally, and totally without purpose, I'm leaving you with a photo of myself making dinner that night (or my attempt at patatas bravas - an update for another day!)  - Because I think it's cute ;) 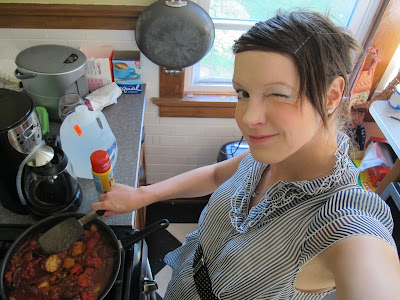